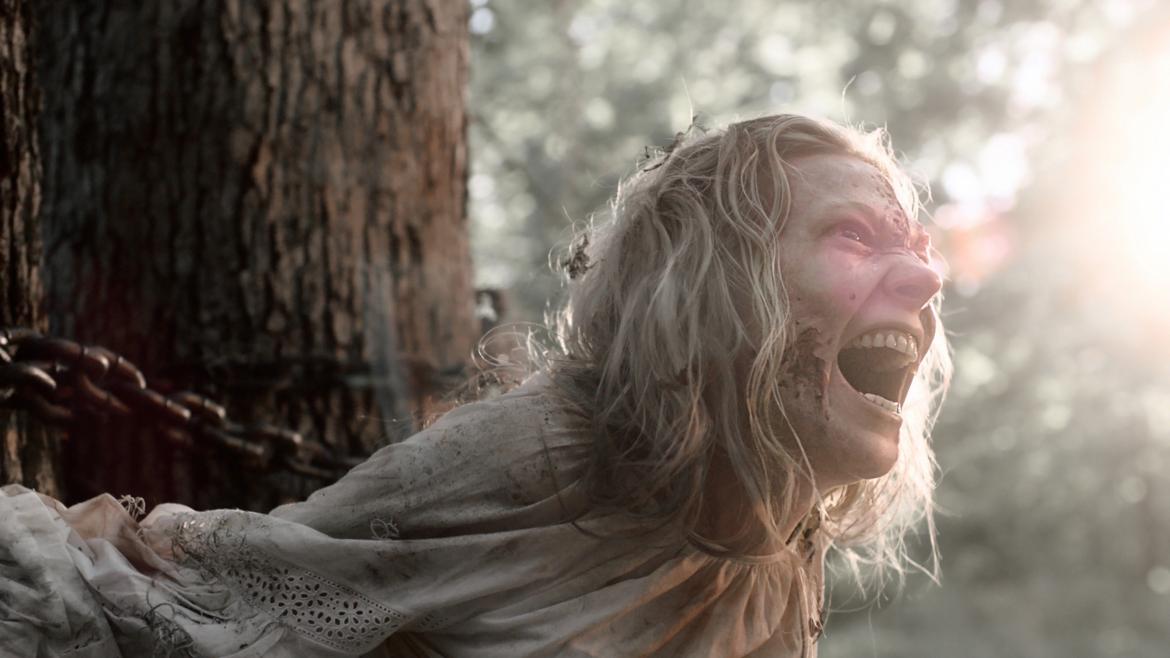 Along Came the Devil 2 (Movie Review)

The original film’s plot introduces two young sisters being raised by their abusive father (Mark Ashworth). The older sister, Jordan (played in the sequel by Laura Slade Wiggins of Shameless fame), is barely mentioned in the first film as she has gone off to Penn State. Younger sister Ashley (Sydney Sweeney) moves in with her aunt Tanya (Jessica Barth), returning to her hometown where the possession story commences.

So, I ask you, why is Jordan verbally introduced in the first film? I posit that the only reason to include her is to set up this sequel – despite her inclusion harming that film’s logic. Why mention a character offscreen with no relevance to this story?

You may ask, Adam, why are you harping on the first film? Many of the plot points in Along Came the Devil 2 are intrinsically linked to events and characters from the first film. The sequel begins with a cliché prophecy/dream sequence, then cuts to the world’s best/worst credits ever – actors’ names scroll up slowly in Helvetica over a helicopter shot of a nondescript lake that was poorly cribbed from The Shining. The film’s title appears; the II Roman numerals lightly on fire by some last minute digital effects. The rest of the film concerns Jordan ‘investigating’ her sister’s disappearance while staying with her previously abusive father (who has inexplicably traded the British accent from the original for a Southern accent here).

The scares in both films are a hodgepodge of inspirations – the most obvious being The Exorcist (1973). Along Came the Devil included a duo of a young priest (Matt Dallas) and an old priest (Bruce Davison), and an exorcism scene that borders on a shot-for-shot remake. Worst of all, the film mentions the Exorcist in the script. (Note to filmmakers; never mention a better movie because it reminds me I could just watch that). Similarly, Along Came the Devil 2 roots its frights in homage, cribbing horror moments and imagery you have seen before. I will give the film credit for a single jump scare; although unearned, it totally got me. It also had a pretty disgusting segment that was more tasteless than terrifying per se and sadly it will be the only thing I remember about the movie.

The main problem with both films is their run time of 87-ish minutes. To get to that length, the filmmakers had to add more padding than an NHL goalie. Laura Slade Wiggins is normally a serviceable actor, but in this film she is given nothing to work with and suffers terribly for it – possessed by the demon of meandering repetitive dialogue. We do not get a good picture of how she is dealing with returning to the town or living with her abusive father. The sequel could have benefited from our lead digging into the history of what happened. This avoids other characters spoon feeding us exposition and explains why the demon jumped to the other family.

Some may say I am harsh on these films, when I should appreciate the work that went into them. These are films with a family behind them. Jason and Heather DeVan are a husband and wife duo involved in all parts of the films (acting, directing, producing, and writing). The film company is literally called DeVan Clan Productions. Along Came the Devil 2 was completed on a very low budget and some of it almost looks like a competently made film. However, that does not excuse feeding us the same slop we have had for years and calling it a home-cooked meal.