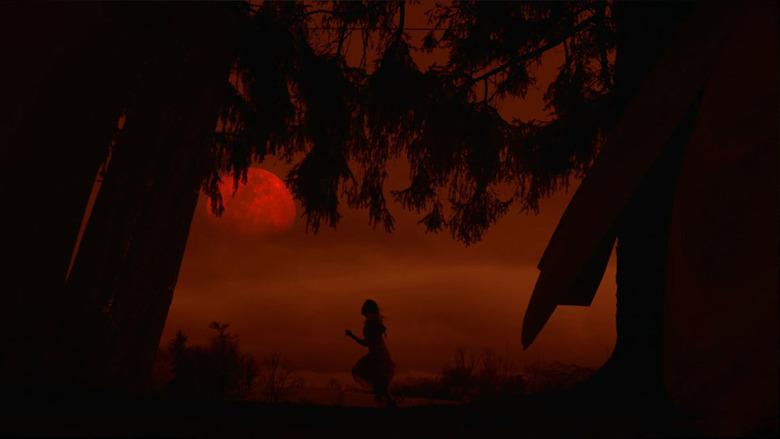 Dora is an average Middle American teenager who enjoys skipping class, hanging out in pumpkin patches and smoking pot with her boyfriend. On Halloween, the two make plans to go to a party together after she returns from her doctor’s appointment. At the appointment Dora gets some unexpected news that turns her world upside down. After being told she’s pregnant, Dora returns home and struggles with telling her mom that she’s expecting and begins to have bizarre daydreams of alien fetuses. Deciding to try and enjoy the evening’s festivities, Dora dresses up in the quintessential virginal angel in white and waits for her boyfriend to pick her up. As the night goes on, Dora is left seemingly forgotten by her beau and at the whims of some rather persistent trick or treaters. Donned in a burlap sack mask, a cut out bucket, and a vintage fur mask, three kids begin terrorizing Dora with bloodied hands and violent destruction.

Kids are disturbing – especially ones in weird homemade masks – and them loitering on your front porch long after you’ve provided them with the candy they may or may not have asked for is unsettling. So the creeps having already started to gain solid footing by the first third of the film is promising. However, once Dora’s interaction with the kids is strained (i.e. slamming the door in their faces) the film takes a bit of a flip and forgets which way is up. While Dora is being stalked throughout her own home with chants of “Momma,” the film itself develops an intense HDR Instagram filter that is seemingly supposed to represent her mental instability as she struggles to survive the portal to Hell that has engulfed her home. Not only are you stuck with this filter throughout the rest of the film, you’re not really given much more plot development besides these mutant children wanting Dora’s baby, or just a baby in general on Halloween to sacrifice. Chloe Rose as Dora is solidly acted and though her character is not given too much development, you still can understand her plight alongside the very well-acted creeper kids. If you start getting lost or bored, you are rewarded with a fun cameo by Robert Patrick as the town cop and resident wise man.

Hellions is kind of like putting the children from Red Rover, the satanic pregnancy bit from Rosemary’s Baby, the absurdity of Poultergeist, and an average teenage girl on Halloween into a blender with a lot of water; you get a lot of interesting or fun chunks but nothing consistent. Basically, the film has a lot of potential and some really great special effects/design work, but seems to fail at hammering it home in the end.