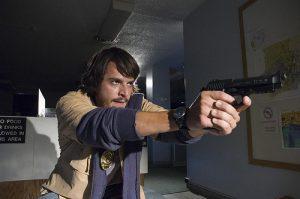 I’m going to stray from the norm a little bit this week. I should be using this time to write about the film “Fall Down Dead”, a low-budget slasher flick that’s pretty much everything you’d expect from a low-budget, straight-to-DVD slasher film. It’s a review that I’m sure you’ve read a dozen times by now. There’d be that paragraph where I talk about the derivative plot that rips off better films like “Silence of the Lambs” and “Identity”, the paragraph about the painful pacing problems that plague the film, the one about the amateur-level acting and the pathetic cash grab of casting washed-up genre actors (Udo Kier and David Carradine if you’re curious) and then the conclusion where I question why this film exists and tell you stay clear and bemoan the stupid twist ending. But that’s boring. You’ve read that a dozen times. And I’ve written it a dozen times. So let’s try something different this time around, shall we?

Why do films like this exist? Being an economist by day, I know that the answer is obvious, because somehow it’s making someone money. And I can understand how that used to be the case. If I think back to when I was in High School and hitting up the local Blockbuster weekly, I could see a situation where I’d rent this film. I’d look at the box and think, “Hey, David Carradine! Dude was in “Kill Bill”, “Kung-Fu” and “Death Race 2000”. This might be okay. Let’s give it a shot!”. And then my friends would say, “no, last week we rented “McHale’s Navy” because it had Bruce Campbell in it, I’m not trusting you again” and then we’d bicker for a little while, briefly consider renting “Phat Girlz” with Mo’Nique, and then walk out with something like “Fall Down Dead”. Two hours later, I’d be apologizing profusely, they’d be going home and I’d be driving back to Blockbuster upset, but with a wallet $5.00 lighter. Thanks to a low budget and pretty insane margins for the retailer, both the distributor and the retailer make some cash at the expense of my naivete.

But with brick and morter video rental stores disappearing about as frequently as congressmen are tweeting photos of their junk to teenage girls, online companies like Netflix or on-demand services are now how the vast majority of people are getting access to films. And now the math just doesn’t quite add up. If that same scene were to unfold today, I’d pop on my Wii, flip to this film on Netflix, see David Carradine’s name, remember how awesome “Kung-Fu” was, see the half-star rating for this film and just go stream “Kung-Fu”. My friends go home happy, I wouldn’t pay anything above my monthly subscription fee and the distributor of the film gets nothing. Presumably, this has to be hurting the creators of these films.

With the Internet being so readily available in our everyday lives, the consumer has a huge amount of information now at their finger-tips that wasn’t there 10 years ago. If you’re streaming a film at home, chances are there’s a rating right next to the movie’s title to alert you that you’re probably going to hate this film. And those recommendations are pretty insanely accurate. Netflix doesn’t push me gory Asian revenge films or campy ’80’s horror films by accident. It’s also no accident that it can somehow figure out my sense of humor perfectly and recommend me shows like “Party Down” or “Louie” and skip on things like “Two and a Half Men”. With the Internet guiding your attention and pre-screening everything for you, how do films like this continue to find an audience? Is there a strange glut of people out there who have Netflix recommending low effort, straight-to-DVD films with has-beens to them?

Or even if you do happen to find yourself at a Blockbuster, you can pull your phone out of your pocket, go to IMDB and get that same information in under 30 seconds. Tricking consumers with gimmicky casting decisions, or even more insidious tricks like naming your film “Paranormal Entity” or “Transmorphers” doesn’t really seem like a reliable business plan given that information is everywhere. Or given that so many of these retailers are hurting, they’ll be cutting costs and not ordering films they know won’t rent well or will be cutting back on square-footage and not even offering these films to the consumer.

Yet these films persist.

Obviously, there’s still an information gap with some consumers. I imagine somewhere out there someone reading this got “I Am Omega” as a birthday gift instead of “I Am Legend” from your Great-Aunt (that’s what you get for wanting a copy of “I Am Legend” on DVD) or rented “Maneater’ because it had Gary Busey on the box (guilty), but really, will this happen frequently enough to justify these awful films being cranked out seemingly daily? With how easy it now is to get a hold of what were once rare, hard to find films, is there still really room for films like this to clog up video aisles or take up a slot in a Redbox? Will genre fans continue to put up with and tolerate such mediocrity and allow for this subset of films to persist and to continue to flourish?

As someone who’s watched more of these low-budget, low-effort films in 10 months than any human being should in a life-time, I certainly hope not.