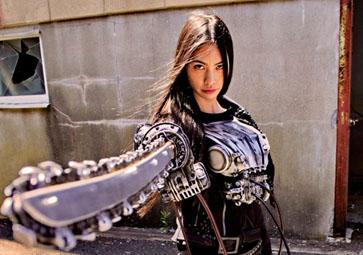 I’m not going to pretend I know anything about contemporary Japanese splatter or J-splotation films; a term I am assuming is only used outside Japan. I’ve seen “Versus” on one of those late night video store runs back when video stores were actually a thriving business. Ya, whippersnappers. Takashi Miike’s “Audition” is one of my favorite horror films period. I would have to hand in my film geek card if I hadn’t encountered “Battle Royale” at some point or another. But other than those films my knowledge of Japanese cinema, and in particular Japanese genre films, hits a roadblock in regards to anything after the 1970s.

So having the opportunity to see Yoshihiro Nishimura’s “Helldriver” (“Nihon bundan: Heru doraibâ”) was a welcome entrance into an unexplored tier of horror and exploitation cinema. In a way the lack of knowledge on these types of films was a blessing. Going into a movie experience without any presupposition is a rare thing given the aggressive pervasiveness of internet advertising and trailers. And having never seen “Tokyo Gore Police,” “Vampire Girl vs. Frankenstein Girl,” or any of Nishimura’s other films I was genuinely excited to get a taste of something inventive and new. I did know that any director/writer who used “vs.” or “gore” in their movie titles should have something to show for it. And let’s state the obvious; the cover has a heroine wielding a chainsaw katana powered by an engine mounted on her chest. I mean, are you fucking serious?! How could I not get into this?! So when I started up the film’s recent Blu-Ray release and was greeted with an introduction from Nishimura saying “The film has a lot of stuff in it” and “enjoy it with a beer or another ‘special beverage’” I was on board and more than happy to oblige.

“Helldriver” centers on Kika (Yumiko Hara), a lonely schoolgirl who endures the emotional and physical abuse of her mother Rika (Eihi Shiina) and uncle, who also happen to be sadistic serial killers. After returning home one day, Kika finds her mother and uncle butchering her paraplegic father’s legs in order to make hamburgers. Rika captures Kika, ripping her heart out in a manner that would make Mola Ram proud. Suddenly a meteorite carrying a large parasite that looks like a starfish strikes Rika. As the starfish attaches itself to Rika’s head, a strange fog begins to blanket the upper half of the Japanese archipelago, transforming those exposed to it into zombies. However, these zombies have also sprouted antennae-like horns out of their foreheads through which they receive messages from Rika, the new, improved, and still sociopathic “Zombie Queen”. In an attempt to control the infection, the government walls off the infected area while attempting to handle the struggles of overpopulation, resource scarcity, and the new elicit street drug manufactured from the zombie horns. Meanwhile, Kika’s body is recovered at the meteor site. Miraculously she is still alive...without a heart. (Still on board). As part of a secret military program to destroy the zombie population, Kika is transformed into a cyborg equipped with the aforementioned chainsaw sword. Along with a wilily group of criminals and survivors, Kika is forced to enter the North and destroy the “Zombie Queen”. Will the group survive the onslaught of crazy-ass and gore that is to come?

A plot synopsis barely scratches the surface of this little piece of insanity. Indeed, the film is only marginally concerned with its plot and seems to use it specifically to make lackluster, shallow references to other films. The more constructive strategy here is to ask if “Helldriver” delivers that slice of inventive goretastic filmmaking I was craving. Unfortunately the answer is not quite, though it is certainly not through lack of effort. Firstly, despite utilizing a female lead protagonist, the film maintains a mean misogynist tone which enjoys a zombie nipple-eating scene a bit too much and portrays women in roles of authority as plain crazy or kills them off. And while the film presents a fairly constant flow of the red stuff, the lack of a counter balance in tone or pace produces messy results. Rather we are given a sluggishly delirious film that begins to lose its punch regardless of how hard it tries to maintain an intense pace with constant displays of lurid subject matter. What we get is something like a two-hour montage of zombie chainsaw fight sequences flatly lit by whatever color gel the crew had on set that day.

But to be fair this characterization speaks to the films strengths as well as its weaknesses. The film is perhaps best described as an homage to the power of gore as a visually aesthetic tool. Fight sequences are only briefly interrupted by exposition and logical rules set up earlier in the film are either ignored or changed at will to make sure a fight scene will be even more bizarre. And while the film is about 30 minutes overlong, there are enough “what-the-fuck” moments peppered throughout to keep a group of people engaged and rowdy. Though the film shows its budgetary strings regularly, Nishimura does not let that slow down the tide of weird set designs, costuming choices, and zombie encounters. Nishimura’s extensive career in special effects make-up departments certainly has helped in cramming “Helldriver” to the gills with all matter of viscera. Опытные беттеры знают, что БалтБет БК с отличными бонусами. Чем активнее ставишь на сайте букмекера, тем больше накапливаешь бонусов. Полученные бонусные баллы можно конвертировать в рубли и использовать их для дальнейших ставок.

We often hear in film criticism the lauding of lean, non-excessive, tightly structured films. I don’t mean in the sense of length or the amount of spectacle but in the economic tethering of plotting, character, and action. However movies like “Helldriver” are specifically about that particular type of fat and in this sense that is where “Helldriver’s” place in the world of movies can be found. This is a film that revels in and seeks to create those rare, novel moments of excess for an audience and is unashamed to do so.