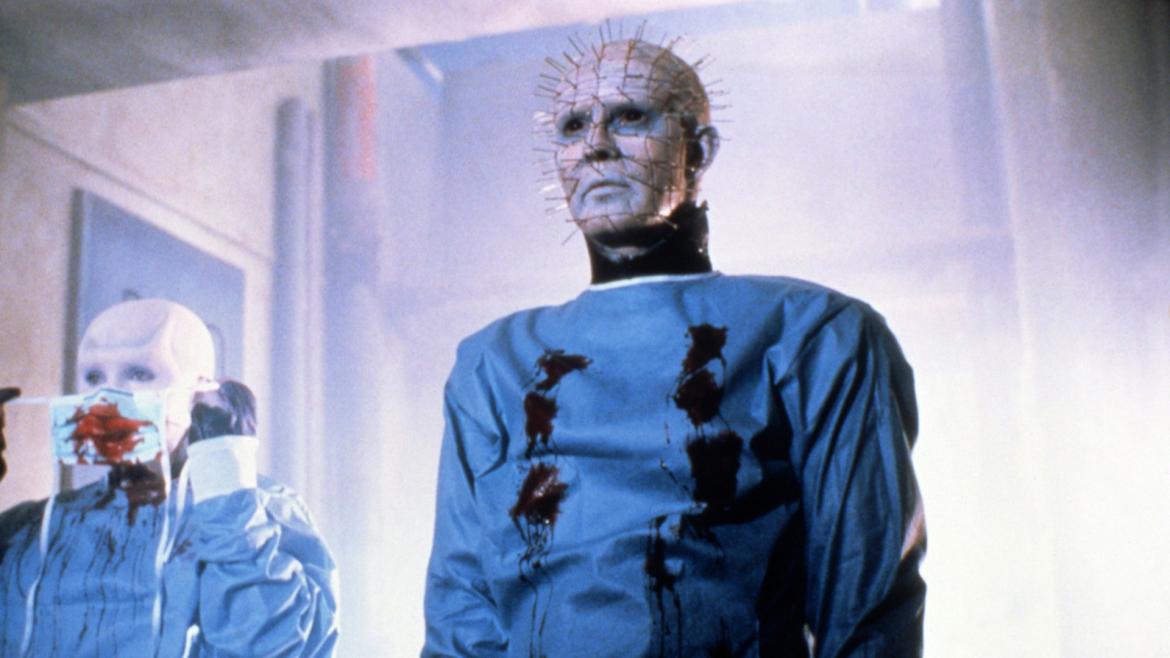 Fun fact: the budget for KY lube for Hellbound: Hellraiser 2 was more than the entire budget for the first film.

Okay, so I made that up. Seriously though, this film is so goopy.

Picking up where the first Hellraiser left off, at the beginning of the film Kirsty (Ashley Lawrence) is in a mental institution (because why would anyone believe that a skinless dead guy and a bunch of s&m demons were real) that happens to be run by Dr. Channard (Kenneth Cranham) who's been obsessed with unlocking the secrets of the Cenobites for a long time. Talk about crappy coincidences, right? When one of the other doctors (William Hope) realizes that Channard has resurrected Julia (Clare Higgins) and that, in turn, everything else Kirsty has said is true, the two attempt to put an end to the doctor's evil machinations.

Hellbound: Hellraiser 2 starts down that road that almost all sequels do: to pad out the mythology of a story that, in all likelihood, was never intended to be more complex that what was present in the first entry. One of the film's strengths is actually that it doesn't attempt to explain everything it's throwing at the audience, or even worrying if viewers can make complete sense of things. There's a rival, new Cenobite, a giant hell god thing called Leviathan that looks like the puzzle box, and all kinds of other crazy stuff. This all seems like it would add up to a mess, but, instead, it actually adds to the feeling that the characters are all just out of their depth, and that the details of this hellish world are that much more mysterious. Part of the reason that things work as well as they do is likely due to Clive Barker still having a hand in the writing of the film. Things may not be transparent on screen, but I'm sure they all fit somehow in his mind.

I was only half joking about the KY budget earlier. Hellbound is a much more extravagant film than the first. Viewers would likely have been happy to spend the film inside the various, creepy levels of the asylum, but then all hell breaks loose and we end up in the expansive labyrinthine home of the Cenobites. Sure, the actual hell sets seem to have consisted of a couple rooms, a hallway, and a catwalk, but the filmmakers manage to make things look huge considering what they were working with. There are a few scenes with some really impressive matte painting work, where the characters are dwarfed by an Escher-esque landscape leading toward Leviathan.

The performances this time around are much better too. Lawrence is still a bit over the top here, but things feel much more natural. As natural as you can get in a film like this anyway. Cranham as Channard is despicable, even before he goes completely over the edge.

In addition to this being the entry that starts to fill out the Hellraiser mythos, in general, this is also the beginning of the cenobites becoming more of the focus of the Hellraiser films. Doug Bradley as Pinhead continues to bring so much to the screen as his involvement increases that it's no wonder he became the emblem of the series.

Hellbound: Hellraiser 2 is one of those rare occasions when a sequel actually elevates what's come before it. With the step up in quality and depth from the first film to this one, I can only imagine how things will improve as the series continues. Right? Right??? Guys?