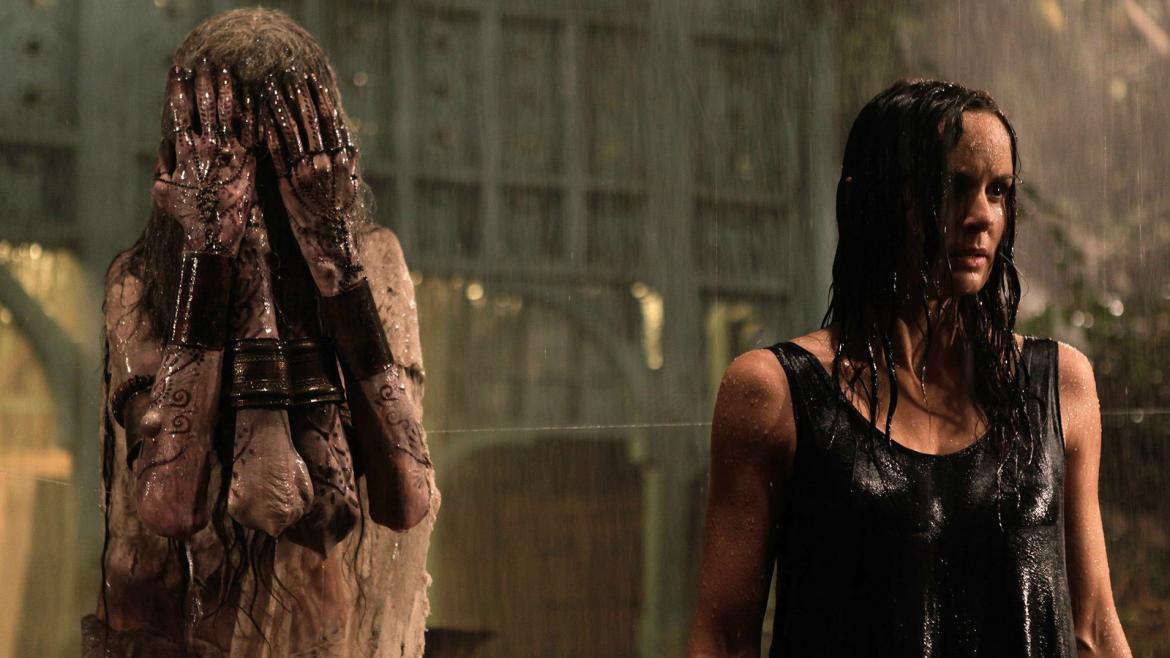 The Other Side of the Door (Movie Review)

The Other Side of the Door, (directed by Johannes Roberts) is a film that wants to explore the impact of grief and the burden of loss on a family but is unable to support the weight of even a single effective jump scare.

The film starts in India where Maria (Sarah Wayne Callies of Walking Dead fame) tells her husband Michael (Jeremy Sisto) that she is pregnant. You see, they are visiting because Michael’s work revolves around picking up antiques, and they are so enraptured they decide to live there, raising their children.  Then, when their eldest son Oliver (Logan Cregan) dies in an automobile accident, their Indian maid Piki (Suchitra Pillai-Malik) takes pity on the woman (why I’m not sure—she has to know she is a moron by now). So she tells her about a secret temple in the woods, where if she was to bring Oliver’s ashes and spread them and wait until nightfall she can speak to him through the door…just don’t open it. Which, of course she does and releases Casper the angsty ghost.

This is one of those movies where the leading person is given a wonderful gift, yet can’t bother to follow simple, god damn instructions. I can see the log line for this movie right now. “Pet Semetary in India” Great. There is a lot that can be made of that, with a huge reservoir of emotion to draw on. But, a theme like that needs grit. It needs a visceral feeling of dread and a sense of pity for the grieving. Instead, we get a dozen or so scenes of a dog barking at nothing and idiotic characters.

Worst of all, there is no reverence for the setting or the people. They are treated as simply spooky. In fact, in spite of having lived there at least 8 years, Maria seems to have had zero interaction with this land or its people, she is just a white person in a scary foreign land. The once eminently creepy Jeremy Sisto is shockingly bland. His character we know, knows the language, yet he makes zero effort to communicate with the creepy locals chanting at his doorstep who are obviously somehow involved in this haunting.

Sadly, what could have been an interesting meditation on grief and pain in a unique setting is reduced to hilariously flacid jump scares and brainless xenophobia.