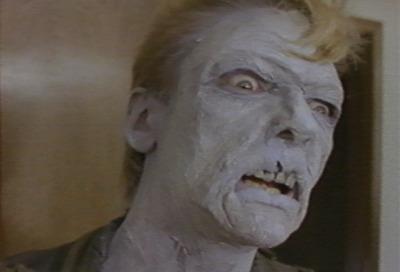 I’m pretty burned out on zombies. And that’s coming from a guy with a “Dawn of the Dead” poster in his living room that’s attempted to talk women up at a bar about their zombie apocalypse survival plans (Pro Tip: if a girl actually has a plan in mind, they’re a keeper). Between zombies showing up on TV regularly, zombies showing up in WWII video games and the slew of crap that’s currently clogging the shelves at your video stores with titles like “Zombie Strippers”, “Retardead” and “Undead or Alive” (with Chris Kattan!), I’m pretty ready to say that undead cinema is pretty dead at this point. But there’s that part of me, that little kid that grew up on “Evil Dead” and “Dead Alive” that doesn’t want to let it go. Because of that little voice in the back of my head, I went searching for what I hoped was a forgotten cult classic. I found “The Video Dead”. I think I’m one step closer to proclaiming zombie cinema dead.

The plot is easily the most unique thing here. Some delivery men who are apparently not very good at their job accidentally deliver a possessed television set to an author’s house instead of the Occult Society of America. Naturally, being possessed, this television will turn on without power, show nothing but zombie films, and also raise the dead. After killing the author, these zombies scatter to the woods and return when a college-aged girl and her brother buy and move into the house.

Outside of this outlandish plot, this is your basic cut and paste ’80’s zombie film. You’ve got your typical synth-driven soundtrack, gratuitous amount of fog and smoke, heavy makeup and vividly red blood. Pretty much every trope of ’80’s horror is here too. There’s the scene where you’re convinced a zombie is shambling up to someone only to find out at the last minute it’s someone else, your heavy handed foreshadowing that will be totally ignored by the main characters despite how glaringly obvious it is and your protagonists will completely forget how to do simple things like climb stairs in the heat of the moment.

There are some different things attempted here, and I’ll give them credit for attempting, but they aren’t really pulled off all that well. Unlike most of those classic zombie movies I’m sure you’ve all seen, the vast majority of the scenes are shot in broad daylight. While it’s an interesting decision, it really just highlights how terrible the makeup effects here are. It also does very little to add to any sense of tension. The zombies also aren’t your typical zombies. They don’t eat brains, they strangle, snap necks or attack with sticks or chainsaws. They eat your cereal. They steal shit from your bathrooms. In a way, they’re really closer to a pack of undead assholes instead of zombies. However, this too kills the tension. The thought of being eaten or torn apart by a pack of corpses is pretty terrifying. The thought of walking into your kitchen, finding someone eating your breakfast and then getting murdered, while terrible, is something that you’d see in a film like “Pulp Fiction”. (Remember that scene? Man, wasn’t that great?)

But there are positives. As bad as it is, this movie has some heart. It’s almost charming in a way. The acting, while atrocious, is entertaining. The dialogue is downright absurd at times, but it’ll make you laugh. I found myself being reminded of movies like “Troll 2” while watching this. While it’s not nearly as entertaining as that film, there are some laughs to be had here. Watching it took me back to my childhood and reminded me of all those random awful films I’d talk my parents into letting me rent. And when you watch as many horror films as I do, you don’t get that feeling much. It’s nice.

Honestly, if it was edited with a heavier hand and some of the sloppier plot points were cleaned up, I’d be willing to give this a few more points. Even with a couple of beers and some friends to distract you during the down sections, this could be way more entertaining of a movie watching experience. However, by yourself, you won’t be able to look past the pacing. This film just never fires on all cylinders. There is a lot of wasted time, a lot of really pointless scenes and more curiously, a strange plot point that never ties into the rest of the film. Early on, the younger brother finds the possessed TV in the attic because of a woman who appears on the TV and calls out to him. Later, she comes out from the TV, teases sleeping with him, then gets killed by someone named “The Garbage Man”. This “Garbage Man” explains that the dead can take the form of anyone at anytime. This never happens. Why is this in the film? It just burns screen time and hurts the pacing. Badly.

“The Video Dead” is not a terrible movie, it’s just not particularly strong. In fact, it’s on whole pretty forgettable. After watching it, it’s pretty obvious to me why it isn’t better known that it is. There’s some solid moments here and there, but they’re surrounded by a sloppy, boring film. Kind of like a Jell-O mold with dried fruit bits. That said, if you’re a fan of ’80’s horror and you feel like you’ve exhausted the genre, you’ll probably want to check this one out. However, if you’re looking for something to remind you why you love a genre that’s been beaten into the ground or are hoping to stumble across a forgotten classic, this isn’t that film.