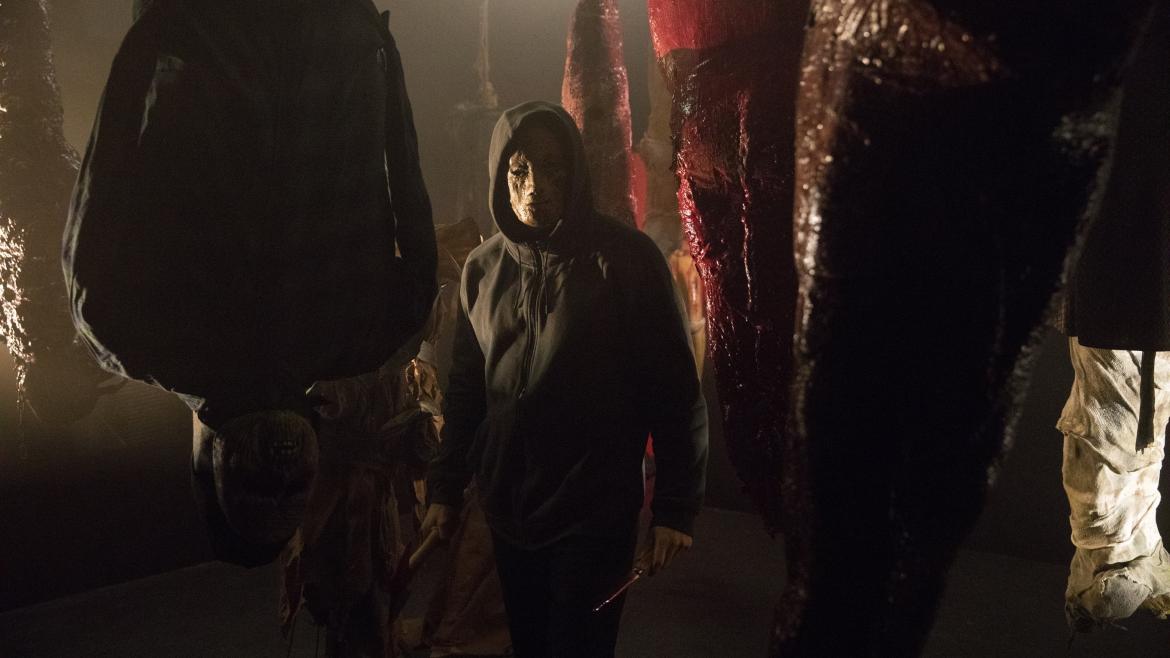 The first time I saw the trailer for Hell Fest, I was pretty jazzed. I’m a sucker for a slasher and we currently don’t often see them in the theaters. Upon its release, however, my excitement waned as a host of reviews detailed the film as mediocre to terrible. So imagine my surprise when I decided to give Hell Fest a spin and it wasn’t trash! But we’re getting ahead of ourselves.

Hell Fest is the second film in the directorial foray of Gregory Plotkin who is mostly known as a film editor. In this capacity, he has been involved with such films as Happy Death Day, Get Out, and all of the Paranormal Activity films after the original (his debut film as a director was Paranormal Activity: The Ghost Dimension, but perhaps we can forgive him for that).

The film follows a group of friends who have ventured to a hot, local haunted attraction called Hell Fest. Part haunt, part carnival, Hell Fest is a giant, technicolor playground for spooky people and teenagers looking to get scared, and that’s just what our protagonists are looking for. There’s only one problem...there is a real killer lurking among the ghouls and he has his sights set on them.

Since this movie has had plenty of criticism levied against it, let’s start with the things that don’t work. My biggest complaint by far was the reliance on CGI blood. This movie had some halfway decent kills going for it, but when those kills are punctuated with spurts of totally unrealistic and overly-shiny computer-generated blood, they really lose whatever charm they had. In all honesty, several of these kills could have been filmed in a mostly bloodless way anyway, and I wonder if that would have even been more effective than the CGI. Perhaps that had even been the intention but then it was added after the fact. The kills overall could have been better, but we get more than a few that are pretty damn effective, so I’ll take it.

So what did work? First and foremost, the premise is a pretty solid one. The idea that a killer could be mixed in with all of the actors dressed up to scare you or that one of the weapons within a haunted house could be real is a pretty creepy concept. When our heroines first see the killer, he’s chasing another girl through the haunted house and they think it’s all part of the act...until he murders the girl. Another big positive of this movie is that watching it is basically haunted house porn, which I love. And the production values of these haunts are phenomenal. So I’m into it.

Finally, (this part gets a little spoilery - so beware!) this movie gives us not one, but two final girls and they are both women who party and drink and make out with boys. In other words, they are regular girls. They aren’t allowed to survive because they are a virginal ideal, and that’s an element that continues evade several genre films.

Hell Fest isn’t reinventing the wheel by any stretch, but if this is a wheel that works for you, then this movie is a fun way to spend an hour and a half. Especially around spooky season, I would say give that wheel a spin!