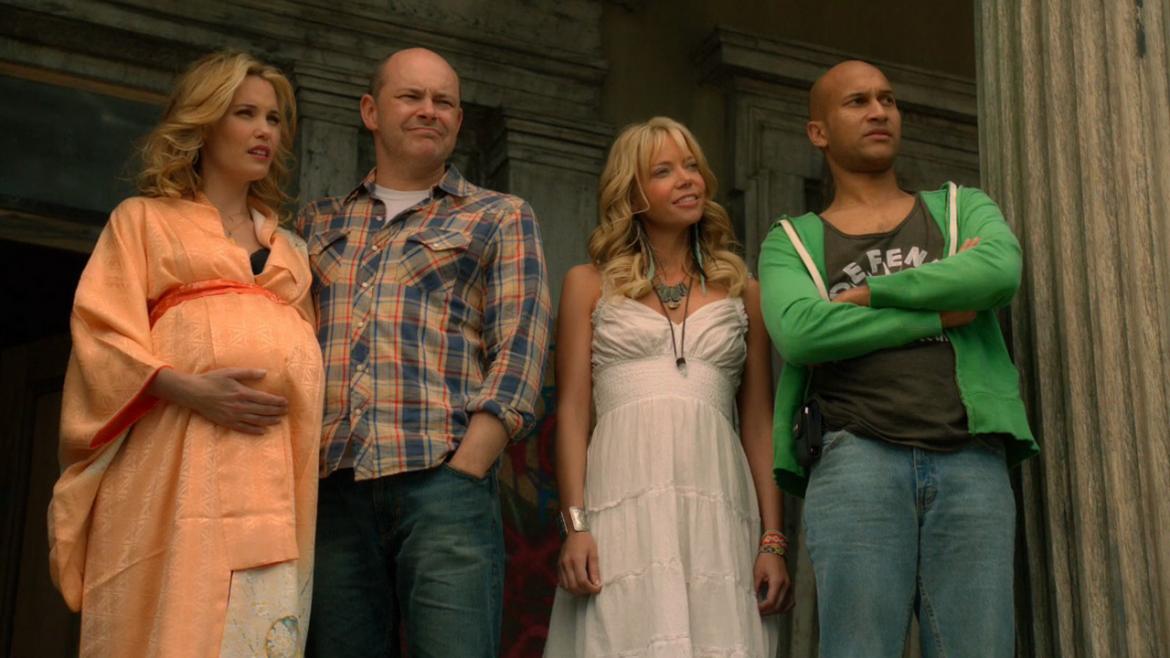 When comedy meets horror, it’s never an even mix. How much do “A Haunted House” and “An American Werewolf in London” really have in common? Not much, but any list of horror-comedies would probably include both. Instead of the “one size fits all” approach we currently take, it might be more helpful to differentiate between “horror-comedies” and “comedy-horrors.” In other words, is this a horror movie with comedic elements or a comedy that takes place within the trapping of a horror movie?

A comedy-horror would be something like “Sean of the Dead” or “Evil Dead II.” Both have gags and wacky characters, but beneath the veneer of jokes, there’s a real sense of peril and a lineage that can be traced back to the horror tradition. On the flip side are horror-comedies, where the horror elements are only there to provide connective tissue between the comedy bits. The “Scary Movie” franchise would be the most obvious example today, but as anyone who has ever seen the Three Stooges creep through a haunted house or Abbot and Costello hide from Frankenstein can attest, horror-comedy has deep roots of its own. Since these are less original works so much as Mad Magazine-style parodies, horror-comedies tend to be uneven, if not outright lazy. They’re only as good as their last joke. “Hell Baby” is almost admirable in how unambitious it is, but the jokes land more often than not, mostly due to a cast packed with comedic ringers.

The movie riffs on the currently hot possession/haunted house genre by way of “Rosemary’s Baby.” Rob Corddry and Leslie Bibb play an expectant couple who find a great deal on a fixer-upper in the “Lower Lower Garden District” of New Orleans. Unsurprisingly, the house has been the site of numerous atrocities throughout the years and, this being a movie called “Hell Baby,” it isn’t long before Bibb is eating raw meat and eviscerating doctors because of the demon baby which has begun growing inside her. The film was written, as well as directed, by Reno 911’s Robert Ben Garant and Thomas Lennon, but chances are that the screenplay (if there even was one) would easily fit on a napkin. Garant and Lennon packed the cast with improv-friendly comedians and let them loose in the horror movie sandbox they’ve built. As can be expected, results may vary.

The good news is that Garant and Lennon have some very funny friends. Michael Ian Black and Kumail Nanjiani make the most out of minor parts and Rob Huebel and Paul Sheer pop up as some of NOLA’s finest, but the supporting cast’s biggest laughs come from Keegan Michael Key, who steals all of his scenes as a creepy, exposition-spouting local who tends to pop up whenever the film is in need of a jumpscare. Oddly, the only characters who completely fall flat are the priests played by Garant and Lennon, whose scenes feel like outtakes from a long lost Father Guido Sarducci movie from the early 80s.

Like a lot of movies made by sketch comics, “Hell Baby” plays more as a series of scenes rather than one cohesive piece of work and as is to be expected of a sketch comedy show, some of the bits work and some don’t. On the whole, “Hell Baby” has the funny quotient of an above average late model episode of SNL: the laughs are fairly consistent throughout, peppered with a handful of belly laughs and a few bombs that land with a resounding thud. The movie wisely doesn’t try for real scares, or even coherence; all the horror elements exist only to tee up jokes. None of that matters, though. If you like these actors and you like the genre they’re riffing on, you’ll probably find some laughs in “Hell Baby,” which is more than you can say about most of today’s horror-comedies.