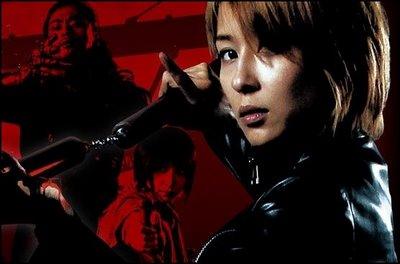 Japan's recent obsession with ultra-violent action movies has definitely been a blessing in the Rigney household. I've been shamelessly soaking up as much of this highly stylized nonsense as I possibly can, regardless of the long term effects these films may have on my emotional well-being. Hell, even the shoddiest entries in this wickedly entertaining genre are somewhat enjoyable. With the abundance of titles currently on the market and those waiting to make a splash on North American shores, it's fairly safe to say I'll have plenty to keep me satisfied for quite some time. Ain't freedom grand?

Director Takanori Tsujimoto's 2008 brutally extreme short film "Hard Revenge, Milly", a precursor to his full-length feature "Hard Revenge, Milly: Bloody Battle", deftly combines two of my cinematic favorites: the revenge flick and the arterial spray flick. The end result is a strong, nuanced journey into a post-apocalyptic world where swords, gunplay, and burning babies are the order of the day. For a film that's barely 50 minutes in length, "Hard Revenge, Milly" certainly packs a punch, and leaves its audience salivating for more, more, more. Thankfully, both movies are currently available as a set courtesy of distributor Well Go USA, a company that seems to understand the importance of unusual cinema.

Miki Mizuno stars as the oddly alluring Milly, a young mother who watches helplessly as her husband and newborn child are savagely murdered by a gang of roving psychopaths. Years later, Milly has returned to the deserted streets of Tokyo to exact revenge upon the heartless punks who thoughtlessly destroyed her family and hideously mutilated her body. Armed with a shotgun -- which has been skillfully installed into her right kneecap -- an extremely sharp sword, and a few other snazzy surprises, Milly begins to annihilate the dreaded Jack Brothers gang one by one. The mission, of course, proves to be anything but ordinary.

Not surprisingly, the story is nothing more than a loose framework on which to hang a small collection of intense, blood-soaked confrontations. Although the film does take a moment to illustrate the gravity of the situation, Tsujimoto seems most concerned with Milly's thirst for revenge, which she dispenses with lethal accuracy. None of her targets prove to be much of a challenge, that is, until she encounters the leader of the proverbial pack. The final confrontation is easily the best segment of the entire picture, and adequately sets the stage for the full-length sequel to follow. Saying anything specific would effectively ruin the picture's impact, so I'll refrain from revealing any of the film's gory surprises.

It's worth noting, however, that anyone looking for an involving storyline will be grossly disappointed by what "Hard Revenge, Milly" has to offer in terms of a traditional narrative. It's a strictly by-the-numbers revenge flick -- what you see is pretty much what you get. Although you've seen this ctale thousands of times before, Takanori Tsujimoto inserts just enough originality into the mix to keep the whole thing from growing stale after the first five minutes. This is one picture you watch for the ample blood-letting, nothing more.

Compared to other pictures in this perverse little genre, "Hard Revenge, Milly" might seem rather tame. Instead of featuring mutant girls armed to the teeth with an outrageous array of weaponry or an acid-lactating geisha who's handy with deadly shrimp, we're given a grieving mother and her unstoppable quest for vengeance. And while that might not seem like a lot to those who have grown accustomed to the likes of "Tokyo Gore Police" and "The Machine Girl", underestimating "Hard Revenge, Milly" is a serious mistake. In a world filled with wannabes and knock-offs, Tsujimoto's disturbed little actioner is the real deal. "Bloody Battle", here I come.