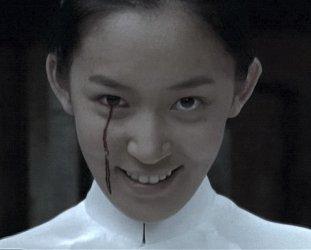 I can’t honestly say that I’m a big fan of Korean films, and “R-Point,” my most recent foray into Korean cinema is certainly no exception. Almost all of the Korean movies that I have seen seem to be at least half-an-hour too long, have meandering plots, and bizarre tonal shifts that I think end up really hurting them. Even Korean films that I’ve enjoyed like “The Host” and “I Saw the Devil” are no exception, as they both share these flaws.

“R-Point” is about a Korean military unit searching for lost soldiers during the Vietnam War. The unit is enticed into taking on this especially dangerous mission by being promised, what seems to be an very exciting (to them at least) vacation where, “Pretty girls will serve them juice” on an airplane.

On the way inland they fight a young Viet-Cong girl, which is the only actual military engagement in the film. They injure her and leave her to die, and then make their way to R-point which is little more than an abandoned hospital. Strange things begin to happen and the unit is eventually killed off a few at a time until the final confrontation with one of the entities that is haunting R-point.

Sounds interesting? Sadly, this film is a absolute mess from top to bottom, and the plot meanders so much that I honestly couldn’t tell you exactly what happens. The film's biggest problems are that it has no clear direction and the script is so poorly thought out that there seems to be no consistent reason for anything that takes place in the film. The unit isn’t haunted by any one entity in particular, or for any reason in particular. Instead, when they get to R-point the unit is afflicted by one random and completely disconnected event after another. It’s as if the writer just made a list of crazy things that could happen, and they filmed the entire list without any regard for pace, structure, or plot.

The soldiers find a marker upon entering R-point that states that those with blood on their hands will be killed. The first soldier who is killed dies because he killed someone and stole their camera, which would be fairly consistent with the warning, and yet there is absolutely no reason given for any other death in the film. The markers also state that the area used to be a lake but the Chinese killed a lot of people and buried the entire lake, although we find out later that R-point is also a French cemetery. So whose ghosts are actually haunting R-point? We’re never told.

I’ll admit the idea of one cemetery on top of another is a cool one, but I don’t think the writer deserves that much credit, because by the time we find out the area is also a French cemetery it just seems like one more random piece of nonsense to add to the pile.

The forms of the haunting have no real consistency either. First, one soldier gets lost and sees the rest of the unit disappear as ghosts into tall grass. They run into an American unit who they find out later was dead the whole time. One of the men in the unit hangs himself, and they find out later that he was actually a ghost the entire time. The dead Viet-Cong girl shows up from time to time, wandering around in a white dress. Dead soldiers appear randomly and scare members of the unit. There are some stalking P.O.V. shots filmed in all green which may or may not be the Viet-Cong girl, and the soldiers are eventually possessed by some kind of entity, which also may or may not be the same girl.

On top of a complete lack of any logical consistency there were a list of things about the movie that bothered me. When the unit meets the American soldiers, the American that talks to them gives one of the most awkward performances I’ve ever seen in a movie. The film isn’t shot very well, despite the fact that the scenery of the jungle, bamboo forests, high grasses, and ruins of both a hospital and temple are things that I would think would almost guarantee a more visually interesting film. The picture quality in general is pretty bad and the color appears fairly washed out for most of the film. There are a lot of comedic elements that aren’t funny in any way either. The movie drags on for so long that I wanted to turn it off with fifteen minutes left, and I would have if not for writing this review.

The ultimate insult of "R-Point" came when I got online to look at the IMDB page for the movie. There is a blurb on their version of the cover art that claims “‘R-Point’ is the best military guys meet supernatural evil flick since ‘Dog Soldiers.’” I’m a huge fan of “Dog Soldiers” and I actually had that movie in mind when I picked this one up at the video store. However “R-Point” really couldn’t be any further away from “Dog Soldiers” in terms of quality, and it might very well be the absolute worst “military unit vs supernatural evil” movie that I have ever seen.