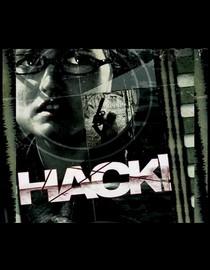 Films that 'save' a generation of horror cinema often leave a legacy of low-budget atrocity in their wake, but it sometimes feels like no movie has inspired so many terrible movies as Scream. Indeed, the premise of kids who know everything about horror movies being trapped in a horror movie scenario sounds as if it a) cannot fail and b) writes itself. For these same reasons, the self-aware teen slasher is tempting to untalented screenwriters – it's practically a Mad Libs, really. But face facts: even Wes Craven (“My Soul To Take”) and Kevin Williamson (“The Vampire Diaries”) couldn't make it through their trilogy without producing a clunky, unfunny mess at the end.

Assembled golem-like from the graves of other, better movies, Hack! is a film about teens who like horror movies stranded on an island where they are stalked and killed in ways that reference horror movies by people whose names are themselves shameless horror references (Vincent, Mary Shelley, Dr. Argento). With restraint, these could have been wry in-jokes. With more thought, one or two of these shout outs might even have been Lucky McKee's loving Fulci homage from May. Possessed of neither restraint or thought, these are each so loud and abrasive that they each drown each other out. Ultimately, nothing is effective. In the film's cold open, Kane Hodder is chased through the forest and beheaded with a circular saw blade and the filmmakers could not even make that concept entertaining in its execution.

The cast of Hack is surprisingly out of sync with the quality of the film. William Forsythe is in this movie. There are people whose names you probably recognize. Danica McKellar, presumably doing this film to finance another math textbook, leads the 'teen' cast of soap stars and that one kid from “Twilight.” The killers are played by Whedon Repertory Theater alum Juliet Landau and soap heartthrob Sean Kanan. Looking at the cast alone, one might be intrigued. One might want to watch. Don't do it.

The plot of Hack! is patchwork and incomprehensible. The camerawork is lackluster. The effects are laughable. This is a film cobbled together by filmmakers who believe that they only important thing in a horror movie are the kills. However, instead of trying to make those kills really entertaining, they just decide that they don't need to concentrate on anything else. In a way, writer/director Matt Flynn inhabits the role of his villains, who prowl their private island seeking victims to star in their homemade homage snuff films; he's essentially doing the same with his cast here.

The lesson of Hack! is this: slavish accuracy is always a less effective homage than a spiritual successor or an evolution of the concepts of the original. Smart, well-crafted, metafictive homages to the horror genre like “Scream”, “The Last Horror Movie”, or Stephen Graham Jones's novel “Demon Theory” have all managed to do so successfully. Hack, though it might be fun for a die-hards to play 'spot the reference' during, ultimately isn't a very good example of the subgenre. Avoid it, unless you're looking for so-bad-it's-good caliber entertainment.