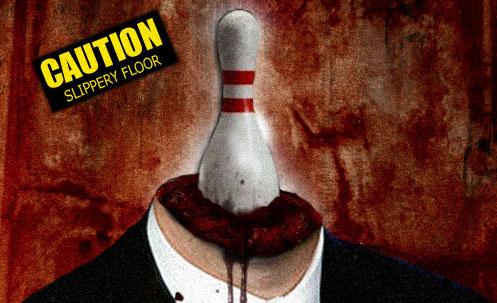 In a small town, there’s not much to do. In this small town, all there is to do is… bowl. As the cool kids in town gather to knock a few down and knock a few back, the common cliques of high school still exist. On one side are the jocks; foul mouthed, bullish and crude. On another side, the pretty girls; full of themselves, decked to the nines and looking… inviting. Finally, you have the cool dudes; rockers, not so jocks and… well they weren’t too specific with this last group. As different minded gangs of youth gather together, of course tempers clash. The jocks get belittled by the rest of the gang, they decide to enact their revenge. Grabbing hold of the head lady in training and having their way with her in brutal fashion; afterward they all gather to bowl again the next night except this time there’s somebody new on the premises; a bowling bag bedecked killer is on the loose!

“Gutterballs” is a low budget throw-back from Ryan Nicholson who previously brought us “Live Feed”. With this outing Nicholson aims straight for the 80’s jugular in setting, presentation and plot. In some factors he reached his goal admirably; in others he leaves you cringing with mild disgust. Once we roll through to the final frame however, “Gutterballs” proves to be a fairly fun low budget throwback worthy of attention.

As with most 80’s slashers, the main forte of “Gutterballs” is a joy of creative kills and high quality gore. Featuring some clever and some over the top kills, they drew both laughs and groans. Quite possibly the first film I’ve ever seen featuring a death by ‘69’, Nicholson obviously holds a love for the genre and its craft. Later we see a death by bowling pin sodomy, various deaths by random bowling alley equipment and quite possibly my favorite; death by ball polisher. In addition to this, the plot in itself is solid enough to get the job done. Most makes sense by the end and there is enough to keep you guessing throughout the movie. However, there are some faults at play here.

The most grating issue with “Gutterballs” has to be the dialog sprinkled throughout the film. While most characters come across as passable, our trio of jocks becomes highly grating within a good ten minutes of film. While it is understandable that they are aiming for a certain stereotype, the parts are delivered so over the top that it becomes distracting and frustrating. If this could have been dialed back a touch, the film would have been far more enjoyable.

My only other gripe with this film comes in the main plot point; the brutal rape scene that airs early on in the film. The scene is shot in very graphic detail and has some elements that come across as too much; so much that the scene comes across as disgusting and not in that fun way; that morally wrong and ‘you’ve gone too far’ sort of way. Now, the idea is that the acts portrayed here are meant to be horrible and I can understand that. For what takes place however, showing the majority of it is stomach turning and for the most part unnecessary. The rest of the scene borders on near ‘Cinemax After Dark’ soft core levels. I don’t have as much problem with this thematic choice; however it does make you wonder at times if you’re watching a horror flick or skin-e-max.

Despite the rape scene and some annoying characters, “Gutterballs” was otherwise rather enjoyable. With a solid plot and some kick ass deaths, the movie will make you cringe and laugh most of the way through. I’ve never seen a killer that wears a bowling bag for a mask, but I can now say it was quite effective. Not in that ‘oh god he’s going to kill me’ kind of way, but that ‘holy shit what’s up with this guy?!?!’ kind of way.