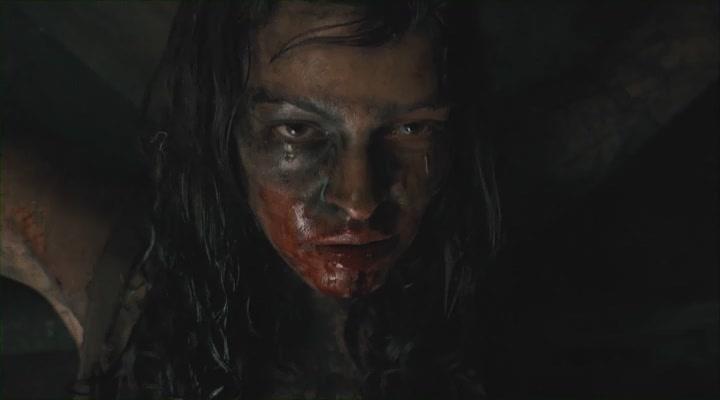 Jack Ketchum is among the greats of horror literature; his work delivering chilling and horrific stories of human depravity. The adaptation of his novel, The Woman, by Lucky McKee with writing support by Ketchum himself, is a no holds barred illustration of the darkest corners of humanity and the violence exacted upon one another.

The Woman revolves around the Cleek family, who by all outside appearances seems to be a normal, happy family. Upon further observation, the dysfunction begins to seep through the cracks. During a hunting trip the father, Chris (Sean Bridges), happens upon a feral woman (Pollyanna McIntosh), naked, bathing.  Deciding to capture her, he ensnares her, knocks her out and chains her up in his cellar. When he introduces his family to the Woman, he orders them to help him “civilize” her. Though the family is initially repulsed and hesitant, they put forward little fight in accepting Chris’ rules. Though Chris is outwardly charming and caring, he eventually rapes the Woman after she attacks him during his initial advances. Witnessing the Woman’s assault by his father, Brian (Zach Rand) also rapes and assaults her. Though Belle (Angela Bettis), Chris’ wife, as well his two daughters (Lauren Ashley Carter and Shyla Molhusen) try to protest his plan, they are subjected to verbal abuse while the Woman is forced to endure brutal and savage attempts to ‘normalize’ her. As the females of the Cleek family decide they cannot continue under the tyranny of Chris, the family dynamic is pushed to the breaking point and their secrets seek revenge.

The Woman is a myriad of misogynistic and human violence. At its core, the film echoes the novel and its complexity of sympathy and pure rage. The performances are decent and though the characters themselves are vapid and stereotypical. The male dominated plot revolves around the abuse of a female and conforming her to established standards. Not only do the other females fall into this category, they help facilitate these rules. Besides the very blatant exploitation of gender throughout the film – the violence is unforgiving. Be is the physical or especially the redundant sexual violence, The Woman produces uncomfortable and bone chilling moments of repulsion. Eventually the audience is provided with a vindictive and somewhat satisfying conclusion, but by that point the film is too far-gone to be redeemed morally. If you're on the prowl for something that pushes the boundaries and lacks in any sort of apology, look no further.