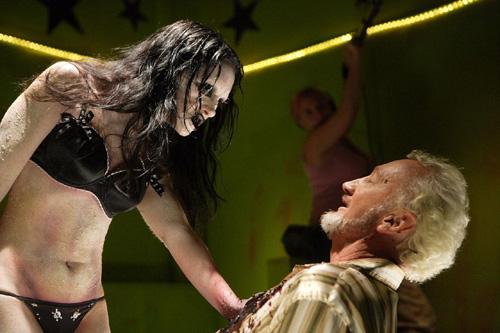 August 18, 2006, brought to a culmination one of the longest public production buildups of all time. That day, a literal Internet-craze known as "Snakes on a Plane" stormed into theaters and proceeded to implode under the pressure of unmet expectations. There's a number of reasons that film tanked as hard as it did, but perhaps most prominent among them was the fact that New Line Cinemas had tried to harness nerd enthusiasm (I use nerd here as someone who saw "SoaP" on opening weekend); and nerd enthusiasm should never be trifled with.

"Snakes" was a phenomenon; the kind of thing that even the people participating in it didn't fully understand. New Line thought they could listen to and interpret the nonsense that swirled around the "SoaP" concept, but they also thought they could control it, and thus a script revived solely because of its ludicrous title became a ludicrously overwrought Sam Jackson vehicle. Instead of a low-budget, low-brow success story, "Snakes on a Plane" will always be remembered as one of the last nails in the New Line coffin.

In many ways, "Zombie Strippers" is the true heir to the throne that "SoaP" would never inhabit. With its sardonically precise title, "Strippers" may once have grabbed the imagination of the hive mind, which could have churned out fan-fic and custom T's in the weeks leading up to its release. The possibilities inherent in the very concept of strippers who also happen to be zombies should have crashed servers with its geek appeal. Except it didn't. And that's a shame, because "Zombie Strippers" is everything that "Snakes" could have been, but more authentic, more hilarious, and just plain more interesting in every way.

Written and directed by budding B-movie auteur Jay Lee (he earns this distinction mainly on the back of "Zombie Strippers," but his earlier film looks to bring the goods as well), "Strippers" tells the tale of an enterprising businessman named Ian (Englund) who runs a strip club in a near-future where G. W. Bush has recently been elected to his fourth term and the Patriot Act has finished the job that it started in 2001. For being completely illegal and situated in bumfuck Nebraska, Ian's club does pretty well. There's a stable of colorful and well stacked entertainers, including a shy new girl, Jessy, stripping to pay grandma's hospital bills. The queen bee of the show, Kat, is played by the incredibly shrinking Jenna Jameson, who, judging by her acting, may or may not have been aware that this wasn't a film where people have sex.

When a zombified soldier stumbles in to the club and proceeds to bite Kat, his star attraction, Ian has to start making some tough decisions. As a businessman, and an illegal one at that, he makes them pretty quickly by locking the zombie in the basement. Everyone's a little shocked however, when Kat not only comes back to life, but also takes her professional dedication to the next level. The crowd, having grown bored with old fashioned live strippers, goes wild for this new Kat, and the queen bee's popularity grows. She's soon making so much money, that the other girls start turning zombie as a career move. Before long, the club features little else beside the stripping undead, and that's when things really get nutty.

For as many times as it threatens to spiral into nihilistic oblivion, the film's center holds pretty steady throughout, a testament to Lee's ability as both a writer and a director, and to his knowledge of the genre. "Zombie Strippers," a film that was never meant to have a theatrical run, looks and feels a lot like "Planet Terror" without any of the money or any of the pretension. Lee revels in zombie gore and has the wherewithal to pull it off on a budget. He also owns the "Existentialist Thinker's Desk Reference," as he weaves philosophical witticisms and in-jokes throughout the proceedings. This erudition never approaches snobbery however, as the characters quoting Nietzche tend to be rotting, naked, surgically enhanced strippers.

Although one would think it should go without saying, "Zombie Strippers" stays true to its B-movie roots. As the stripping zombies begin to gradually look more and more like, well, zombies, the body count starts to skyrocket and mayhem ensues. By this point though, if anyone is still taking this film very seriously, they likely should see a proctologist about the stick in their ass. While the absurdity level continues to climb to 11, there's enough at the film's heart to make any zombie devotee glad they made some time for these living-impaired working girls. Unlike "Snakes on a Plane," which drowned on its own hype, "Zombie Strippers" just lets it all hang out, and has fun doing it.

The Art of Self-Defense (Fantasia Festival 2019)

Aimy in a Cage