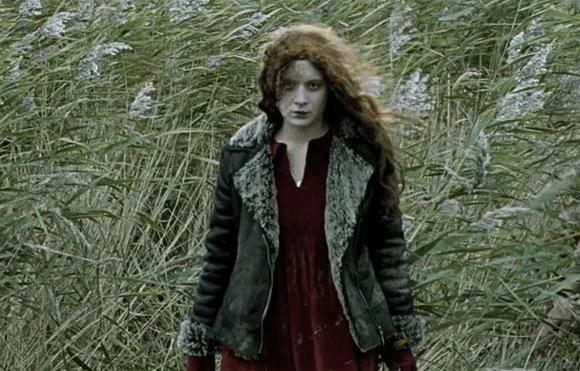 Out of the eight motion pictures selected for this year's After Dark Horrorfest, director Nick Cohen's 2009 creeper "The Reeds" was the one I was looking forward to the most. The reason: Producer Simon Sprackling, also known in certain circles as the mastermind behind the deliriously insane 1994 horror/comedy "Funny Man", which just so happens to be one of my all-time favorite cult movies. Sprackling has been rather quiet since his unusual debut, which may explain why I was more than a little excited to get my pasty little hands on this decidedly peculiar little production. I know my unchecked excitement about the project sounds a little creepy, but what can I say? I'm a fan. Sue me.

Unfortunately, "The Reeds" is somewhat of a disappointment. The performances are strong, the story is suitably eerie, and Cohen's direction is competent, but the payoff is a bit of a misfire. Going into the specifics of the film's derailment would spoil the ending for anyone who's yet to experience the picture, so I'll refrain extrapolating on the details. I will, however, say this: Movies that paint themselves into a corner should never employ the gimmick used in “The Reeds” unless they’ve laid the groundwork for such a technique. I was unpleasantly surprised by the film’s conclusion, and, as a result, I feel as if my time has been unfairly wasted.

The framework is pretty generic stuff: A group of friends charter a mysterious boat and venture off into the countryside for some fun and relaxation. During their quest to find a pub buried deep within the outskirts of nowhere, the crew stupidly decides to cut through a large swath of reeds in order to save some time. In doing so, the boat runs afoul of a protruding metal spike, which, of course, finds its way through the belly of one of the gentlemen on-board. With no other alternatives to explore, one of the braver fellows ventures off to find help, leaving the rest of the group to face the countless horrors that are lurking all around them. Bizarre events begin to poison their sanity, and before long, all hell is breaking loose.

Cohen does a find job of building suspense during the first half of the feature, though he stumbles somewhat in his delivery of the climax. Too many questions are purposely left unanswered, and while I generally reward this sort of ambiguity, there isn't enough tangible information to draw any sort of logical conclusions. Granted, "The Reeds" was going out of its way to put me to sleep, so certain details may have gotten lost in the haze of sheer boredom. To be fair, even if the film's Scooby Doo conclusion had included a thorough, well-written explanation for these events, I still wouldn't have cared about the characters or their supernatural plight.

The only thing saving the film from tumbling helplessly into the same category as the rest of this year's After Dark Horrorfest entries is the talent and dedication of its cast. The performances can't prevent the awkward script from ruining the overall experience, mind you, but they do help keep you vaguely interested for the duration of the picture. Had everyone been presented with a stronger script, perhaps the flaws wouldn't stand out as much as they currently do. A valiant effort, wasted.

Don't get me wrong -- "The Reeds" isn't the worst horror movie I've encountered this year, but it definitely ranks as one of the slowest and most disappointing of its brethren. Had Cohen not opted for an easy ending that robs its audience of a rewarding finale, my opinion may not sound quite so harsh. As I've said countless times in the past, a weak ending can ruin any movie, regardless of how accomplished the first half of the picture may be. Is this this sort of movie I was hoping to receive from the man who directed "Funny Man"? Not quite. Sprackling needs to ditch the producer gig and get behind the camera post-haste. His skills are much better suited elsewhere.