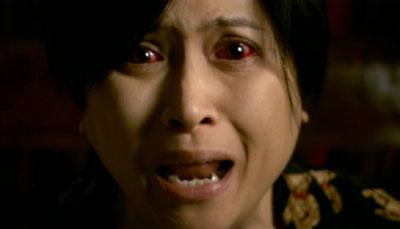 Thanks to a dingy bootleg-friendly video store I frequented during the early 90's, I am, for better or worse, well versed in the world of Category 3 (CAT III) Hong Kong horror. Ngai Kai Lam's silly "Riki-Oh: The Story of Ricky" and Danny Lee and Herman Yau's "The Untold Story" were my cinematic mentors: both were trashy in their own unique ways, dishing out fair amounts of unsettling gore and inappropriate wackiness with varying degrees of effectiveness. They also helped stimulate my appreciation for the work of Alex de la Iglesia and, believe it or not, David Lynch. Cut Corner Video, may you sweetly rest in peace.

Though some may have lost their edge with age, CAT III pictures were a pretty big deal with I was a teenager. Packed with nudity, bizarre sexual situations, and graphic violence, they were considered by many to be the most extreme of the so-called extreme motion pictures -- locating any of them on a shelf inside a mainstream video outlet during my youth was an exercise in futility. However, when compared to the impossibly vile stuff you can experience at this very moment on cable television, many of these films seem very, very tame. Locating torture, humiliation, violence towards children, and intense splashes of gore in filmed entertainment is fairly easy in the new millennium; the stuff they cut out of horror films in the 80's is exactly the same stuff your parents are watching on “CSI” right now.

"Gong Tau: An Oriental Black Magic," directed by the aforementioned Herman Yau, is strongly reminiscent of the films I cut my proverbial teeth on way back when. It also does a tremendous job of mimicking those corny Hong Kong witchcraft yarns from the 70's without coming across like an obvious Tarantino-esque homage. And while it may not be a shining example of a perfect motion picture, Yau's unflinching eye for unsettling carnage and co-writer Chun-Yue Lam's dark and dreary script do make for a thoroughly enjoyable viewing. Assuming, of course, that your stomach has been lined with iron and your disbelief has been appropriately suspended.

Mark Cheng ("Election 2," "Invisible Target") stars as Officer Rockman Cheung, a tough-as-nails Hong Kong policeman battling with the unexpected loss of his newborn child and the ensuing mental collapse of his grieving wife (Maggie Siu). The baby's grisly death is certainly cause for alarm; no one within the department can determine how, exactly, someone managed to inflict multiple stab wounds to the infant's body without being seen. Rockman's partner Officer "Brother" Sum ("Legendary Assassin's" Suet Lam) believes the troubled cop's wife and child's untimely demises were the result of a Gong Tau, one of the most painful and problematic curses on the books. And that’s before the caster’s head pops off.

Rockman initially suspects professional thug Lam Chiu (Kenny Wong) is responsible for this series of heinous crimes. Which makes perfect sense, really, when you stop to consider Cheung and Chiu's violently storied past. As the bodies continue to pile around the city and Rockman's wife slips further into dementia, our heroes begin to suspect that more sinister powers are working beneath the surface. Is Lam Chiu really the cause of all this misery? Does this wanton bloodshed have something to do with Rockman's recent trip to Thailand? More importantly, will the sweeping melodrama and redundant conversations lessen the film's overall impact?

The latter's a very tricky question to answer. Yes, "Gong Tau" feels the need to assault with you with the same information over and over again ad nauseam. And, yes, you could, in theory, develop a drinking game around how many times a character says the term "gong tau." Plot elements, like the presentation of its over-the-top violence, are literally pounded into your skull with the force of four atomic bombs. If nothing else, no one can accuse Herman Yau of subtlety. If you aren't sure who did what to whom and when the first time around, don't worry -- the second explanation isn't too far away. It’s a veritable exposition overload.

As wordy as "Gong Tau" is, there really isn't much of a story here. Every scene, every line dialogue, and every character motivation has been manufactured for maximum on-screen carnage. When you strip away the bloody road kill, the maggoty babies, the explicit autopsy, the full frontal male nudity, the icky corpses, and the various spins on voodoo and black magic, you're pretty much left with something that might have once been considered as made-for-cable vehicle for Jeff Fahey. Not that there's anything wrong with Fahey's movies, mind you, but it is a tad simplistic. Fortunately, the story is interesting, the characters aren't unbearably annoying, and the pacing is spot-on, giving you something to focus on when the flaws begin to scream their presence from the hilltops.

Regarding the gore: It's pretty effective, even for those who consider themselves to be hardcore gorehounds. Maybe it's the use of insects, or the close-ups of gnarled cats -- I'm not sure what button it pressed, but my gag reflex was engaged on a few occasions. It definitely isn't the wettest or juiciest CAT III title in the collection, but it does rank with the worst of them. Anyone who can watch a woman vomit earwigs and centipedes without feeling something stir within their digestive tract is probably due for some sort of psychological evaluation. Andrew Zimmern fans, on the other hand, shouldn't have any trouble whatsoever.

“Gong Tau: An Oriental Black Magic” is a cavalcade of grotesque imagery and illogical nonsense. And by illogical, I mean vampiric disembodied heads complete with spinal cords and internal organs casting spells and sucking blood. If you dig voodoo and curses and creepy bugs and police procedural dramas, you’ve come to the right place. Otherwise, you may want to find your fix elsewhere. After all, there’s no sense exposing yourself to regurgitated earwigs unless you’re in the market for something gross, depressing, and flat-out bizarre. I enjoyed it immensely, but I doubt I’ll ever watch it again.