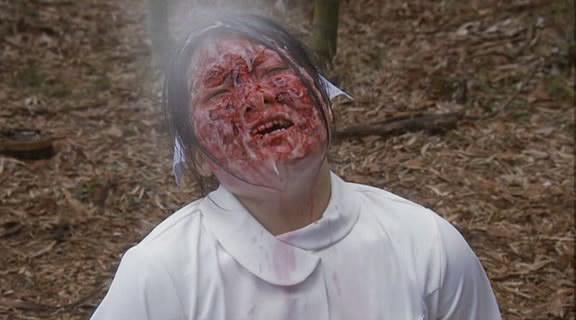 Whenever I find myself wrapped in the sticky mucus membrane of anticipation, I tend to worry that I'll let expectation and unchecked fanboyism overrule my ability to objectively review the experience. As you well know, becoming weirdly obsessed with an upcoming movie can ultimately derail your enjoyment, especially if you allow yourself to get sucked into the well-oiled Hype Machines that continuously feed Internet-addicted film fiends with an endless supply of images, posters, trailers, and unnecessary hyperbole. And while I'd like to think that I am immune to such questionable practices, I must admit that I, too, am completely helpless against these unstoppable forces of electronic marketing.

When compared to his 2008 hyper-violent cult classic "The Machine Girl", Noboru Iguchi's deliciously gory screwball comedy "Robo-Geisha" is somewhat of a disappointment. Not only is the cheap, cornball violence kept at a bare minimum, the level of overall insanity has been toned down in favor of a few cheap sex jokes and lots of pointless exposition. That's not to say that the film is completely without merit, mind you, but it certainly wasn't the pinnacle of over-the-top debauchery I was hoping it would be. Of course, I can't but wonder if I'd feel differently had I not been following this film so closely for so long.

At its core, the picture is a simple story of sibling rivalry, one that just so happens to include such high-brow dramatic elements as napalm wigs, acidic breast milk, fully automatic mammary cannons, and a few mismatched pairs of killer socks. Yoshie, the film’s demure heroine, lives in the shadow of Geisha sister, who spends a fair amount of time physically and emotionally abusing her faithful companion. After meeting a suave and sophisticated businessman, both girls are forced to join up with the evil Kageno corporation, a diabolical steel production company that plans to unleash its highly-trained Geisha assassins onto the unsuspecting Japanese population. If that wasn’t enough to send people into panic mode, the masterminds behind this nefarious plot intend to drop a huge bomb into Mount Fuji, an event that could effectively wipe Tokyo off the face of the planet.

Strangely, “Robo-Geisha” feels a bit more restrained than its contemporaries. There’s still plenty of madness and mayhem to be found sprinkled throughout the film’s clunky 101-minute runtime, but it seems particularly weak in comparison to the other options currently on the table. Even Nishimura Yoshihiro’s special effects seem shoddier and less effective this time around. When Yoshie suddenly transforms into a high-speed tank-like vehicle, the impact is, unfortunately, very underwhelming. There was never a point when I was completely dazzled by the film’s on-screen antics, which, as you well know, is the only reason to watch this sort of movie. Characterization and careful plotting be damned -- we want arterial sprays, bloody dismemberments, and an unholy amount of freakish kills. Sadly, “Robo-Geisha” just doesn’t cut it.

Maybe I'm just being too picky, or maybe I need to stop watching crazy Japanese action movies for a little while. If I'm so desensitized that I can't find cinematic bliss in an extended fight sequences that involves the insertion of shrimp into a suicide bomber's ocular cavities, it might be time to re-evaluate how I spend my free time. On the other hand, like-minded Asian freak-outs such as "Vampire Girl vs. Frankenstein Girl" and "Geisha Assassin" didn't leave me feeling bored, heavy-lidded, and unimpressed. "Robo-Geisha" is missing something, and for the life of me, I can't seem to figure out what it is.

Then again, maybe this goes back to expectations. I've watched so many clips, trailers, and music videos for Noboru Iguchi's deliriously violent sci-fi farce that it couldn't possibly live up to the movie I've seen a hundred times in my head. "Robo-Geisha" is exactly what you'd want from the genre: action, violence, Japanese girls in skimpy clothing, and an abundance of gore. Problem is, there's really nothing new here, and despite my desire to see things differently, I honestly can't say that I wasn't disappointed with the movie. It may grown on me after repeat viewings, but at the present time, it's really nothing that special. Insert heavy frown here.