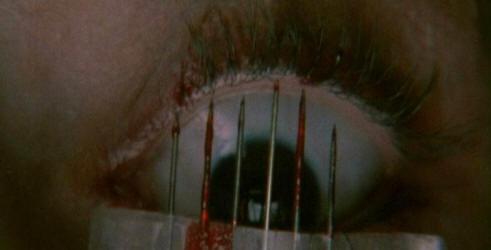 Dario Argento's "Opera" tells the story of a young budding opera starlet who is being stalked by a killer that likes to tie her up and force her to watch him kill people by taping needles under her eyelids. The movie starts out with Betty, the young opera singer, landing her first big role as a lead in "Hamlet." The killer immediately begins to stalk her and murders a stagehand during her first performance, causing the crew to lament that the play is cursed, as they believe productions of "Hamlet" often are. After a series of brutal murders, Betty, the director, and the rest of the crew are then forced to use all the resources at their disposal to discover the identity of the killer and put a stop to his hijinks.

"Opera" is what you would call a "Giallo" film, and for those who might be unfamiliar with the term, a giallo is a bizarrely specific sub-genre of horror, Italian slashers that are also part murder mystery. An artist, or in this case several artists, are forced to unmask a mystery killer who stalks his victims wearing black leather gloves.

For those of you already familiar with Argento you'll know that he is famous for his sense of visual flair and this movie is a great example of just that. While his most well known film "Suspiria" is often noted for it's use of intense colors, "Opera" is more about elaborate camera movements that often involve long winding P.O.V. shots from the perspective of basically everyone in the movie including, at one point, some really wild shots from the viewpoint of ravens circling the opera house. While there are still a few times where the sets are awash with solid greens and reds, an aesthetic that was more prominent in his older films like "Suspiria" and "Inferno," what really stick out are the multiple, intense closeups of eyeballs, visually rich settings, dramatic spinning overhead shots, and the various other elaborate camera movements.

For the most part the score of this movie was very good, and typically consisted of either some kind of synth or opera music. However my biggest beef with "Opera" is that whenever there was any action or violence, for some reason, Argento chose to use some really horrid metal music, that didn't fit in any way whatsoever. I suppose that he was trying to contrast the melodic opera music with something more jarring, but it just ends up being extremely annoying instead. It might have been tolerable if it had been decent music, but it just sounds like some unbelievably shitty version of Judas Priest. Plus the tone of "Opera" is dark and serious enough that any light-hearted music just doesn't fit at all.

I've seen this movie a few times now and at first I was kind of struck by how cohesive story is, but on watching it a second time I realized that it is probably only "cohesive" in comparison to other Italian horror films that I've seen, in that it actually has some semblance of a plot. Although the story in "Opera" might make a lot more sense than something like "House by the Cemetery," or "Nightmare City," there are still a lot of bizarre moments that just don't make any sense whatsoever. For instance several of the scenes are inter-cut with images of a pulsating brain, and loud sounds of a beating heart, for no reason whatsoever. Also there is one especially mind-boggling scene where Betty escapes from the killer and is given a car-ride from her director a only a few moments later. Instead of her telling him that there had just been a murder only minutes before and contacting the police, they have a really bizarre exchange where she explains to the director she doesn't have sex before her performances to improve her voice. They continue to discuss how artists have a reputation for being hyper-sexual and the director confides that when he is making a movie that he, "Always jerks off before shooting a scene."

This movie also has some odd self-reflective moments and barbs that seemed aimed specifically at Argento's critics. The "director," a stand-in for Argento, is told his critics call him a "sadist," to which he replies: "Oh really? How boring of them." At another point a policeman asks him for his take on the murders since he has made horror films, to which the director responds that he wouldn't know because movies and real life are completely different. There is also a really wacky moment at the end of the movie where Betty finds a lizard trapped under a twig and frees him while exclaiming: "You're free now beautiful!" and then hugs the ground around the lizard. I imagine this is a reference to "Deep Red," where a little girl kills a similar lizard for absolutely no reason whatsoever. This is so strange and out of place that it will probably leave anyone who watches this movie left scratching their heads. I know I was pretty baffled despite the fact that I was pretty sure I knew what Argento was referencing.

I don't know if "Opera" is a movie that will have a broad appeal for modern horror audiences, and it's probably not a good starting point for someone who hasn't seen any of Argento's other movies. However I do think it is a good film and I'd consider it a really good choice for fans of really violent slashers or just fans of Italian horror films in general.