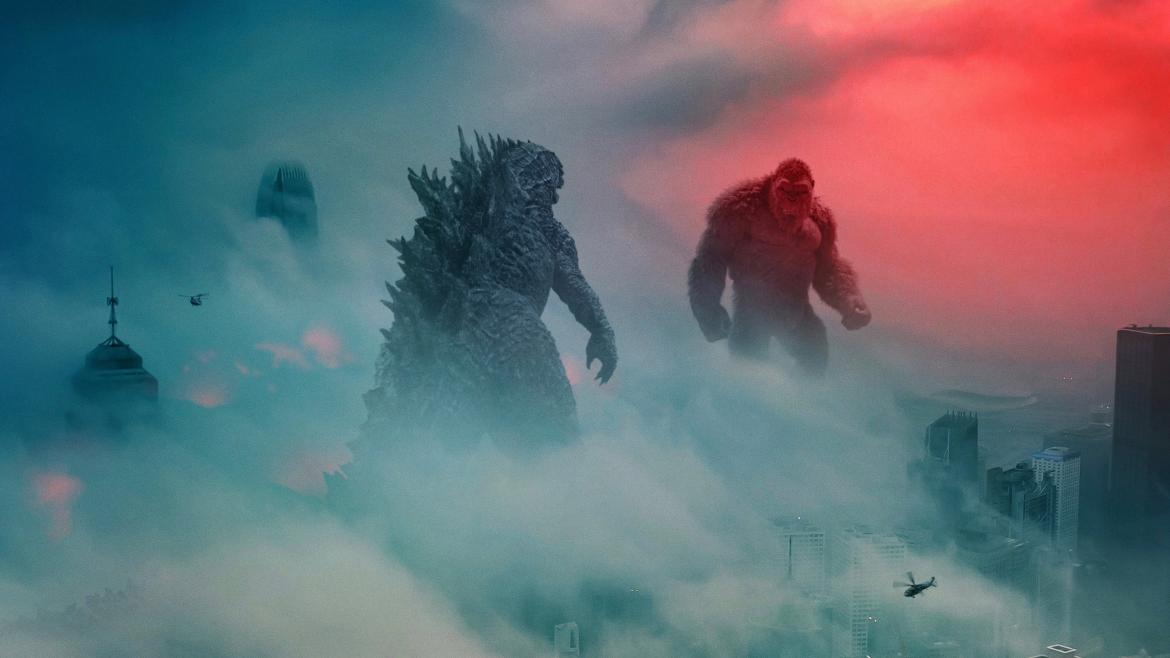 Writing a review of Adam Wingard’s Godzilla vs. Kong seems like a losing battle, not because the film is bereft of things to talk about, but because people seem to have made up their mind before seeing it. If you are one of the few on the fence let us cut straight to the point. This is a massive scale blockbuster first and foremost, completely dedicated to the action indicated by the title. Both Godzilla and King Kong have had much loftier goals in other media, whether it be a treatise on nuclear devastation or a deliberate plea for human empathy. Godzilla vs. Kong is neither of these things.

Much has been opined online as to the disparity between human elements and the giant monster action in the world of the Kaiju film. Godzilla vs. Kong has a vast imbalance in this regard with monster brawling dominating the majority of the film; in many ways the main character of the film is Kong. The film gets away with this imbalance in a very clever way by emphasizing Kong’s ability to communicate in a way that feels real. In many ways the monsters feel akin to the 1964 classic Ghidorah, the Three-Headed Monster, a film which cemented Godzilla as a character, and resulted in a massive shift in terms of characterization. However, where Ghidorah balanced its monster action with memorable characters that offered equal amounts of entertainment, Godzilla vs. Kong finds no such equilibrium.

To me human characters always matter. They are the lifeblood that keep you engaged in the battles of Gods. In Godzilla vs. Kong they are there and they are important to moving the plot forward, but they are far from the film's focus. Easiest way to parse the issues is to divide it by who the characters spend most of their time with.

Team Kong has a rough start by bungling something that is hard not to bungle in a King Kong film: the native people of Skull Island. Since the 1930s, the racist elements of King Kong have found themselves permanently intertwined with the character. The portrayal of “natives” in the 1976 King Kong is just as racist as in the 1933 King Kong original. Peter Jackson’s 2005 King Kong did the incredible feat of making it even more racist than the 1930s version. The first big budget Kong to start making small steps at changing these connections was Kong: Skull Island (2017). In that film the islander people have a name-- the ‘Iiwis’--and are depicted as peaceful and of a discernable Asiatic descent.

In Godzilla vs. Kong the Iiwis are wiped out off-screen with only one single survivor. Kaylee Hottle is great as the one remaining islander and her relationship with Kong is touching. This scenario, however, positions the film as incredibly pro-colonization. Monarch has set up shop on the island which conveniently coincided with the death of all its human inhabitants. This decision could have been given weight if the film was actually interested in exploring these issues in any depth. Monarch has locked up Kong who we briefly witnessed as an essential apex creature balancing the entire island’s ecosystem. Removing him would permanently shift the island habitat, but the film just doesn’t care. Kong is the lead character and looking through his eyes his entire team should be viewed as horrific monsters.

Team Godzilla has an entirely different problem in character Bernie Hayes (Brian Tyree Henry). Hayes is built off of conspiracy theorists like Alex Jones and let me tell you no character trope has aged more poorly since 2016. Bernie starts to derisively refer to one of our leads played by Julian Dennison as “Tap Water” due to his spouting out the conspiracy theory about fluoride in public water. I would be lying if I pretended like I didn’t enjoy Bernie’s onscreen antics. He is extremely likeable with a good heart at his core, which is actually the PROBLEM with his character. In real life these people are nothing like this and positive portrayals send erroneous messages to the viewer that they can be a heroic saviour in just a few message board posts. The other character issue comes into play with Millie Bobby Brown as Madison Russell. In 2019’s Godzilla: King of the Monsters, Madison was a pivotal character with an emotional focus on her family. In Godzilla vs. Kong, her character is put on a similar path. Her father, played by Kyle Chandler, is completely separated from her for the bulk of the movie which leads to a loss of further development for the two characters.

The human villains are pretty enjoyable, if one note. They exist solely to set up the big monster battle with a few twists near the end of the picture. You get just enough of most of them but you get virtually nothing of Shun Oguri as Ren which would be fine if his character hadn’t been written as the son of Doctor Serizawa (Ken Watanabe), one of the lead characters from Godzilla (2014) and Godzilla: KOTM. It is a tremendous shame that the character receives lip service attention and never features even the slightest hint of motivation.

Amazingly these issues are, in essence, small components of a movie that is an absolutely stunning monster brawl. Godzilla vs. Kong is beautifully filmed with an unmatched intensity from most Hollywood blockbusters. The action is flawless with stunning visuals and complex choreography. If you are going in looking to see Godzilla and Kong duke it out, you will not be disappointed. It is a thrillride from start to finish. Referring to this sort of spectacle as a “rollercoaster” may be trite, but in this case I apply the term literally. The way our human characters weave through the final battle feels right out of a 4D dark ride like Universal’s Back to the Future amusement. The promise posed by the title is delivered.

I did thoroughly enjoy Godzilla vs. Kong. King Kong has never felt more like a fully realized character with a touching central relationship. The action set pieces are breathtaking, and my boy Godzilla is treated with love. The criticisms still stand with a high weight placed upon them. Much like the original King Kong vs. Godzilla (1962)--which is simultaneously a  wonderful comedy and a film that features horrific black face--Godzilla vs. Kong is an action packed monster brawl with an asterix.