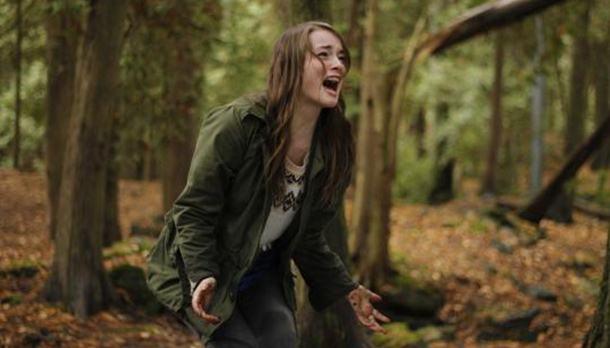 Every year right before Halloween there seems to be a whole slew of unheralded horror releases that get dumped at your local video store, Red Boxes etc. They tend to come and go without much fanfare because they seem to be either extremely low quality or in this case, like “The Barrens,” films that just didn’t turn out quite right. So I guess you can look at these as last minute emergency rentals for people wanting to watch something scary on Halloween. I suppose it is the one week of the year where film-makers and distributors hope that they can make the most of their investment back on their low-budget miss-steps.

“The Barrens” is a movie about a man who decides to take his family camping at the New Jersey Pine Barrens in the hopes of relaxing and reconnecting with his wife and children. Unfortunately for them, a monster called “The New Jersey Devil” is on a murderous rampage and is out to kill campers and anything else that might cross it’s path.

I’d never heard of the New Jersey Devil before but apparently it is an actual cryptid that is sort of an amalgam of a horse, dog, and a bat. The movie describes two different origin stories which ended up being the most interesting parts of the movie, to the point where I think just an origin story of the New Jersey Devil would have made a much better movie than what we ended up with.

I’m all for horror movies about cryptids and I think cryptozoology is incredibly fascinating in general. The process of how these local legends start and perpetuate for decades is pretty incredible. People tend to see what they expect to see, so any scary shadow in the woods or strange noise at night is something that people can easily imagine is the local bugaboo man or what-have-you. Unfortunately, I don’t think any cryptid legend has ever translated into a good movie. Most of the ones I’ve seen have actually been pretty awful, the most glaring example being: “The Mothman Prophecies,” which was so shitty that it still pisses me off to this day. I’m not saying there are none out there, and I think I may have seen a movie about chupacabras that was pretty amusing at some point, but it seems to me that cryptids have not been fertile ground for horror movies.

This movie actually came with a director’s commentary, which are usually reserved for more well-received movies, but I think more movies should have them regardless. The director, Darren Lynn Bousman, complains at length about the tiny budget, time constraints, lack of pre-production, and one-take scenes that he felt wrecked his pet-project. However from my perspective, none of these things were the real problem with this movie. The monster looked decent, the acting was serviceable, and everything else was plenty good enough to make a good b-movie except for the inexplicable plot.

Normally when I hear people complain about characters in horror movies behaving in a way that “no one ever would,” I just roll my eyes because every single day, people all over the world do things that don’t make any logical sense. However in the case of “The Barrens” I think this ends up being a genuine problem. *Minor Spoilers:* The father is bitten by the family dog which was rabid and then he kills the dog, but for whatever reason does not seek any sort of treatment or tell his wife, who happened to be a nurse and would know better, so basically the entire movie the father is rabid. This is all pretty ridiculous for obvious reasons; plus you can add to that the family walking for hours in the woods to find the perfect camping spot, and they wait to stop until they find a shredded tent with a dead dog tied nearby and a book of satanic drawings inside. Makes sense, right? And to top it all off the father had taken the family to the same campground where he was attacked by the Jersey Devil as a child. I know we have a lot of bad parents out there, but I doubt many of them would take their children to campgrounds where they had seen demonic monsters, regardless of how long ago it had been.

The dvd also includes an extended ending for European audiences that sets up a sequel, and to be honest if the director got enough time and money to make it, I would definitely be interested. This movie wasn’t a complete disaster, and I think there was enough of an good idea here that I hope Darren Lynn Bousman gets to make the movie that he really wanted to, instead of leaving “The Barrens” as the final word on the Jersey Devil.