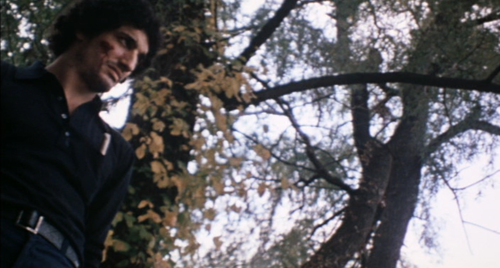 The Last House on the Left (Movie Review)

It was the summer of 1971 when two future horror legends, Wes Craven and Sean Cunningham, gathered in the woods to shoot "Last House on the Left". Almost more important than understanding what happens in the film, it's crucial to understand the world that the film was born into. At the time it was made there was a counter culture suffering from the burnout of a failed social movement and increasingly harder drugs, and a mainstream America whose children were being decimated by the seemingly never-ending conflict in Vietnam. The early 70's were a time of cultural upheaval, of taboo-breaking cinema, and on a world scale, human suffering and violence. America was suffering through an existential crisis, and as a result, this time period bore some of the most intense cinema we have ever seen. It's through that prism that the original "Last House on the Left", and its upcoming remake, must be viewed.

The film opens in a scenario that reminds one of soft core pornography. We literally open on fetishised shot of a young girl named Mary while she's taking a shower. Mary has just turned 17, and is about to embark on a night out with one of her closest friends Phyllis, to see a rock concert. Mary's parents are none too thrilled... not about the satanic band they're going to see, or Phyllis' perceived "New York Ways". Mary's father even awkwardly comments on the fact that she's not wearing a bra, and her mother laments that children just don't have respect and decorum like they used to. They are your stereotypical early cycle baby boomer parents, stuck in an old set of morals being rapidly laid to waste by their children, and naively holding on to them at all costs.

Mary and Phyliss first go off to spend some time in the woods drinking. Then after a short drive to the city, including a trip for some ice cream, the duo stops a strange looking young man on the street and asks him if he could help get them some weed. It turns out to be a BIG mistake. The man that they've stopped is Junior, the youngest in a group of four murderous convicts just escaped from prison. We met them ourselves a scene earlier, and hear several news bulletins about their ghastly deeds throughout the first 15 minutes or so. Mary and Phyllis seem to be oblivious to the reports, even though the foreshadowing is glaringly obvious to the audience.

These four villains, and their four respective performances, steal the show in almost every way. David Hess plays "Krug", the cold-hearted ringleader. Fred Lincoln takes on the role of "Fred 'Weasel' Podowski", the slick right-hand man with a penchant for his switchblade. "Sadie" is the lone woman and sexual servant of the group. Finally, "Junior", Krug's son, perhaps the only one of the four who even approaches sympathy throughout the film. Once the two girls enter the apartment, the situation turns ugly almost immediately. With the door shut and weapons drawn, it's at this point that "Last House" takes a decidedly dark turn.

After an initial beating and rape of Phyllis, we cut to the next morning and Krug loading both women into the trunk of their car. The group then peels away from the motel they were staying in, and heads off into the countryside. They don't make it very far before their car breaks down, which forces them to stop to try and fix it. It's at this point that Phyllis, by now coded as the constant agitator, bites Krug and sets him off. The decision is made that the girls can not stay with them if they are to proceed any farther, and the two are dragged into the woods to be offed... but not before they have their fun first.

What unfolds next is probably the most infamous scene in "Last House", where Krug orders Phyllis to urinate in her pants, and then to go down on her friend Mary. Mary, who has largely been spared from humility up until this point, is cut and raped until she enters what can only be described as a near catatonic state. After a failed escape attempt by Phyllis, both girls are brutally stabbed, beaten, raped, and left for dead.

"The Last House on the Left" seems in many ways to be an exercise in contrasts. Early on while events are taking a turn for the worse for the girls, Craven intercuts odd scenes with Mary's parents preparing her birthday cake. These scenes are such banal pictures of American suburban life in the 1970's, set to such upbeat bluegrass music, that the contrast is nearly impossible to ignore. Even certain scenes with the gang transporting the girls in the trunk during the middle portion of the film come off like some sort of zany road movie, a tone that is sometimes hard to reconcile with the events unfolding. Despite this, it's that scene in the woods that seems to wash all of that away. It's a disturbingly iconic scenario for a reason, and the impact manages to overshadow even some of the suspect acting. Watching the scene unfold, one wonders if that was the day on set when no one felt like they were acting at all.

Don't get me wrong, "Last House on the Left" is not a perfect film by any means. In fact, things start to fall apart for me right around the point when the killer's arrive (unknowingly) at the Collingwood's house to shack up for the night. Once the parents slowly arrive at the realization that they have welcomed their daughter's killers into their home, Craven's script veers much too far into unrealistic territory. Rewatching this nearly 7 years after seeing it for the first time, and comparing it with a later Craven film "A Nightmare on Elm St.", a bizarre fascination with overly elaborate booby-traps becomes apparent. It's the same problem that I have with a film like "I Spit On Your Grave". In real life when someone takes revenge it is a cold, brutal act done out of rage and anger. Watching Mr. Collingwood rub shaving cream on the hallway floor in an attempt to setup some sort of slip and slide for his daughter's killers, one has trouble holding back laughter. And although the parents ultimate revenge is still fun to watch, it never quite lives up to what Krug and co. did to their beloved daughter, mainly because of the silliness of their plans. это http://oobooi.ru booi казино- вход на официальный сайт

We don't wanna off someone first night out. I mean, it'd be a shame to get this floor all messed up with blood.

Still though, there is a lot going on here under the surface for those willing to look. Craven has stated time and again that this is a grand statement on his generation and the Vietnam war. In a way, you can look at Mary's exuberance with her burgeoning sexuality, and her ultimate destruction, as a not very subtle metaphor for the destruction of America's innocence during that time period. We were no longer the heroes who "saved the world" during WWII, but rather a country lost, defeated by our own naivete and brashness. Krug and Co., for their part, seem to have been corrupted by copious amounts of booze and hard drugs, something the "free love" generation was very much coping with at the time. In that way, they are the stereotypical fallen love children-turned-speed freaks. The idea of their corruption, as opposed to them actually being "evil", is slightly enforced by a brief moment after they kill the two girls, when even Krug seems disgusted by what they have done.

I do have to say that going back and watching this film with significantly more genre experience under my belt has given me a new appreciation for it. It's not a particularly great film, but when viewed in the context of both Craven's career and genre cinema in the 1970's, it becomes an extremely important one. Craven has said that with "Last House", himself and Sean Cunningham were literally trying to learn how to make movies just by going out and making one. The result is a dangerously chaotic atmosphere that only happens when you have a young and talented filmmaker who still doesn't quite know what he's doing. It's a magical combination that makes for a Grindhouse fan's wet dream, and one that still serves "The Last House on the Left" well to this day.

As far as the remake goes... the year 2009, current world conditions considered, may actually be a really interesting year to revisit this film. It's nearly impossible to believe it will be as brutal, but perhaps in its own way it will be tapping into something the country is going through right now, and ultimately, that kind of timeliness is probably the most noteworthy thing the original has going for it.