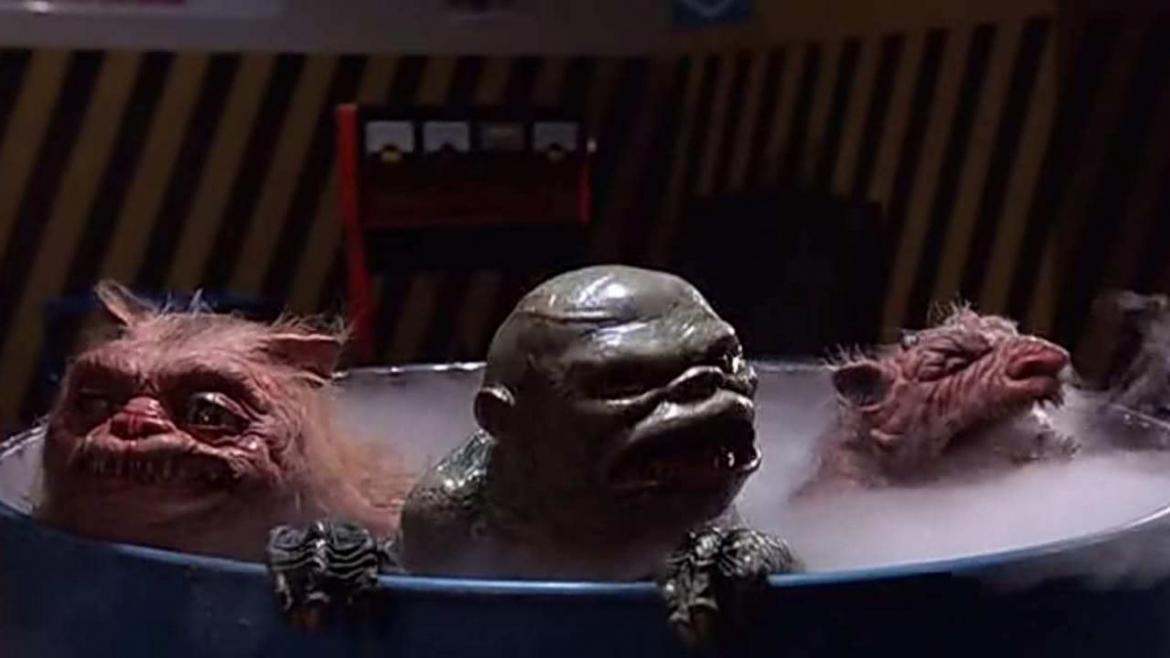 “They’ll get you in the end!” vows the poster for 1984’s satanically tinged quasi-creature feature Ghoulies. At first blush, this tagline appears to be merely a, shall we say, cheeky reference to the star of the poster: a small demonic creature (or “ghoulie”) popping out of a toilet, waiting to attack some unsuspecting victim’s “end.” However, it’s also a disappointingly accurate assessment of the ghoulies’ involvement – or lack thereof – in the film bearing their name.

For about two-thirds of the movie, the malicious little critters are either nowhere to be found or just harmlessly idling around. It’s not until the final act, when the ghoulies are mercifully set loose on the film’s sorry collection of human characters, that Ghoulies earns its moniker. Until that point, we are forced to pass the time in the company of Jonathan (Peter Liapis), a guy in his mid-30s who has finally decided to drop out of school and become a wizard. A wizard who also dabbles in repairing the old gothic mansion he and his girlfriend just inherited. See, Jonathan’s deceased father – the home’s former owner – was a powerful satanic wizard. From beyond the grave, Pops (Michael Des Barres) manipulates his son into following in his footsteps. Mostly, what Jonathan does is welcome the ghoulies into our realm and annoy his inexplicably tolerant girlfriend (Lisa Pelikan), but things do seemingly ramp up eventually.

Rather than use his 80 minute runtime to show tiny monsters running amok, Ghoulies director (and co-writer) Luca Bercovici elects to invest much of it on Jonathan’s gradual embrace of his magical new career path. This is an astonishingly poor decision. Jonathan is incapable of carrying the movie. The same goes for the one-note friends who keep showing up at his house: the gross player, the loose lady, the nerdy guy who does silly voices, and the not one but two guys whose only defining trait is “laughing stoner.” Oh, there’s also Mariska Hargitay in her film debut, a role she almost certainly “accidentally” always forgets to include on her resume. The only thing any of these characters has to offer is a cool death by bite-sized demonic critter, but ultimately Ghoulies can’t even get that totally right.