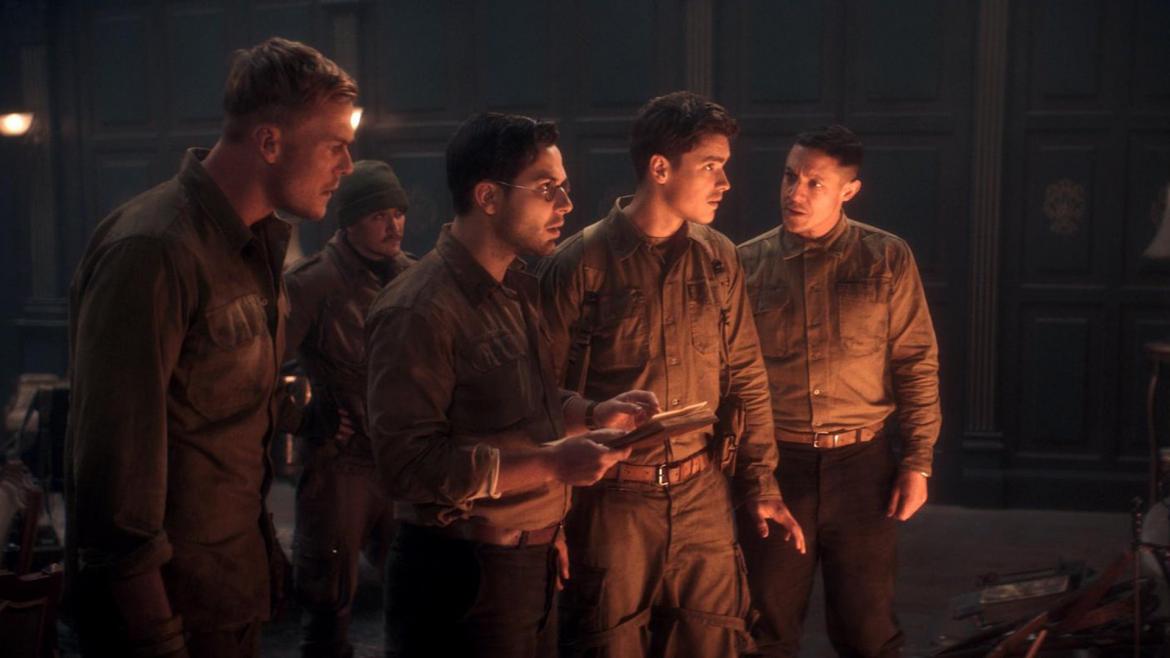 In 2004 Eric Bress capitalized on Ashton Kutcher’s popularity to deliver The Butterfly Effect—a film that was against type for the primarily comedic actor. Out grossing its budget by a long shot, one would assume this success would open doors for bigger, better projects. Fast forward to 2020 and Bress’s sophomore film Ghosts of War comes to us with little fanfare after a 16-year hiatus at the helm. The gap proves to have not affected the filmmaker’s ability to create an uneasy cinematic aesthetic, but the film‘s ambitions eventually unravel, revealing a concept that’s silly at its core and ultimately forgettable.

Brenton Thwaites leads as Chris, one of many soldiers riding out the end of World War II in Europe. They arrive at a French Chateau with orders to relieve the soldiers currently stationed there and hold the position. The mansion seems like the ideal spot to rest their tired bodies, but the soldiers leaving seem more than willing and relieved to depart. One by one the soldiers explore the cavernous estate and discover evidence of something awful. The group soon uncovers that vengeful spirits lurk in the shadows looking to settle a score.

Bress’ Ghosts of War is semi surreal to witness. It feels like a movie that was frozen in time, forgotten, and hastily thrown out into the ether hoping to catch an audience. The film has the look and feel of a Hollywood ghost story that doles out jump scares like Sour Skittles presented as an amuse-bouche. Throughout the first two acts it’s hard to shake that something seems off, but you can’t quite tell if it’s the unrefined storytelling or a purposeful hint to a last act reveal. In reality, it’s a little bit of both. Without tipping off what Bress has up his sleeve the cloak-and-dagger of it all will likely be met with fewer exclamatory “Ah-Ha’s!” from the audience and many more eye rolls.

Does its haphazard logic, cheap jump scares, and unfortunate reveal make it an irredeemable slog? Not entirely. The cast is inspired and full of recognizable faces. Skylar Astin, Theo Rossi, and Kyle Gallner all put in some serviceable work. There are also aspects of the ghost story which are effective, but there’s no real ingenuity or nuanced methodology behind the madness. In spite of what it does well Ghosts of War can’t escape the legacy of other films have done time and time again before Bress’ directorial absence.

Ghosts of War’s fatal flaw lies in the fact that it’s trying to be smarter than its audience—the same people who’ve become accustomed to the tricks Bress pulls along the way. Tonally the film fails to assert itself, coming off as a bland amalgamation of dark haunted house horror with a tasteless side of cheese and hardened war thriller. Ghosts of War is a film whose reach exceeds its grasp, undercutting it’s serious aspirations and leaving it as a bit of a silly mess.