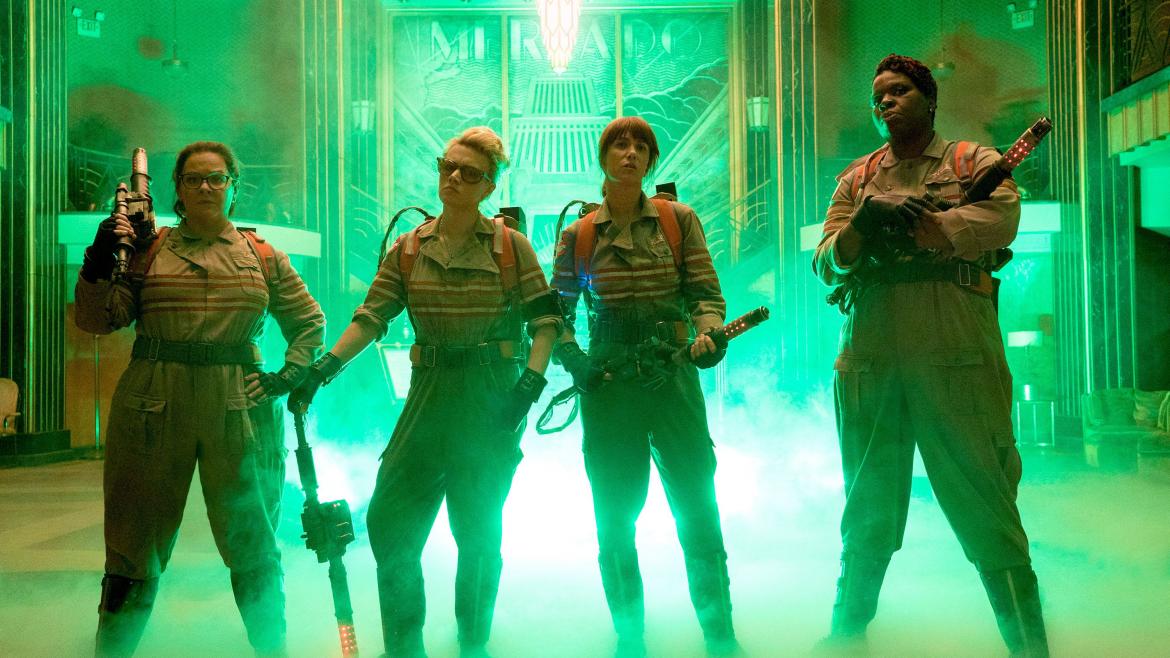 Since the moment it was announced, the 2016 Ghostbusters reboot, and everyone involved in the project  have been under intense scrutiny. In a world where the YouTube comments section--a generally unfriendly place full of people screaming into the void--and MRA trolls can be easily whipped into a frenzy, it is no wonder that movies featuring female characters that are even marginally competent face criticism. But the rage against this movie went beyond even that, with the trailer became the most disliked in YouTube history  and writer/director Paul Feig receiving death threats. Despite the fact that plenty of other film franchises have been lazily and cynically rebooted in the last few years in a blatant attempt to make money, all the good intentions in the world (let alone the fact that it hadn't even been released yet) couldn’t seem to keep the new Ghostbusting team safe from harm.

The new film is set in a present-day New York that has never heard of the Ghostbusters. Erin Gilbert (Kristen Wiig) loses her position at Columbia teaching physics when a video of her interacting with a ghost with her childhood friend Abby Yates (Melissa McCarthy) and a nuclear physicist named Jillian Holtzman (Kate McKinon) goes viral, the three decide to dedicate themselves full-time to the study of the paranormal. Before long they set up shop in an office above a chinese restaurant in Manhattan, hire a totally incompetent receptionist named Kevin (Chris Hemsworth), and are joined by an MTA worker named Patty (Leslie Jones) whose knowledge of New York City history becomes a real asset. As paranormal events start escalating in frequency and magnitude throughout the city, the Ghostbusters have to save New York before it’s too late.

When movies get as much pre-release attention as this one did, it’s hard not to go into it with expectations, whether they’re good or bad, and Ghostbusters hits the ground running. Within moments, the fabulously savvy Paul Feig, who directed the film and cowrote it with Kattie Dipold (who also wrote The Heat) pack in the humor as a tour is lead through a historically haunted mansion. The level of jokes is maintained throughout, never really dragging. Lines of dialogue that feel as though they are aimed squarely at the film’s critics pop up throughout the movie, including a scene where reading the comment section on one of their YouTube videos, Erin indignantly cries, “Bitches can’t fight ghosts?!” The script is fantastic through and through and the relationships between all of the characters are expertly sketched, all of which is strengthened by an expert cast.

Even more perfect, the villain that the ladies are up against is an average looking white dude, who feels so betrayed by a world that doesn’t fully appreciate him that he has decided to bring about an apocalypse. The move is a subtle one, but couldn’t be more appropriate. As Rowan waxes poetic about how hard his life is, he tells the Ghostbusters that at least they have been afforded the dignity of being treated like human beings, with the respect that they deserve, and all of the angry articles and comments and blog posts are brought to mind.

As a female viewer, I have to admit that the experience of viewing this movie was a little surreal. Sitting in a theater, watching Holtzman decimate a gaggle of spooks in slow motion, I thought of all the little girls who will go see this movie and want to be Ghostbusters, and of all the little boys who will feel the same way, empathizing and identifying with female characters. There isn’t a saccharine moment in this movie, but I left the theater feeling like no movie had made me feel before.

This movie knows what it’s up against from moment one, and doesn’t drop the ball once. It honors the legacy of the 1984 original and is able to match its essence perfectly. It pays homage without ever wandering into a disingenuous territory. That this movie has done well this weekend can only help to prove all of the haters wrong. The original movie was a game-changer that became a cultural touchstone, and in a lot of ways, this Ghostbusters feels like the first  of a new kind of movie. Let’s hope it’s not the last.