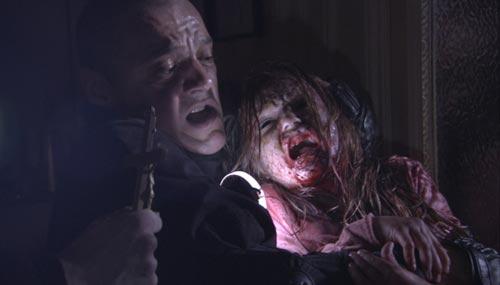 Whenever I'm quizzed about the scariest movies I've ever seen, Jaume Balaguero and Paco Plaza's creepy 2007 effort "[Rec]" is always one of the first pictures I mention. The film managed to violently worm its way deep beneath my skin, which, if you know me, is no small feat. Over the past few years, I've become weirdly desensitized to cinematic fear, a by-product of the embarrassingly large amount of time I've spent entrenched in the genre. What makes the film so memorable, so impossibly hard to shake is the bowel-quaking intensity of its finale, which plays out like an unholy amalgamation of "Silence of the Lambs" and Aphex Twin's classic "Come to Daddy". It's as hair-raising and visually unpleasant as it sounds.

The announcement of a sequel was met with excitement and trepidation. Expanding on the ideas touched upon in the original would only work if the same level of intensity was generated for the sequel. And while Balaguero and Plaza’s ambitious 2009 follow-up “[Rec] 2” doesn’t shatter your soul as thoroughly as it should, the experience is nothing short of brilliant. There are certain elements that, for whatever reason, smeared a mildly unpleasant aftertaste across my cinematic palate, but this probably had more to do with my own personal expectations than anything else. The direction the filmmakers decide to take the story is risky, but as long as you’re willing to go with the proverbial flow, everything should fall into place quite nicely.

"[Rec] 2" begins precisely where the first entry ended, and wisely assumes you’re completely familiar with the ins and outs of the storyline. As with “[Rec]”, the sequel unfolds from the perspective of a video camera, though in this case, the devices have been strapped to the helmets of the heavily-armed operatives who have been assigned to infiltrate the infected apartment complex. Along for the ride is a representative from the Ministry of Health, who is on a valiant quest to locate a sample of blood so that an antidote can be formulated should this nastiness escape the confines of the building.

Once this squadron of highly-trained military-types make their inside, things quickly take a turn for the worse. In addition to encountering a gaggle of enraged blood-thirsty ghouls, the group discovers that their Ministry of Health contact isn’t who he claims to be, and that their mission isn’t as clearly defined as they’ve been led to believe. The twist, unfortunately, is definitely a little hokey, and completely alters everything you’ve been told up until that point. It adds a few unexpected layers to the rest of the picture, and forces you to reevaluate your perception of the disease, its victims, and the origins of the creature hiding out in the penthouse.

Although the films lacks the emotional punch of its counterpart, “[Rec] 2” does sport several seriously impressive scares. Balaguero and Plaza aren’t stingy when it comes to assaulting your fragile senses with visceral carnage; the infected children are perhaps the most terrifying critters in the bunch, though the beast skulking in the shadows of film's seriously deranged finale definitely clocks in at a very close second. The directors’ willingness to leave the door wide open for yet another installment in this increasingly popular franchise is off-putting, as is the picture’s strangely misguided subplot. These flaws, however, are more irritations than full-on distractions.

Packed with gory action, unbearable suspense, and a twist that will either terrify or annoy you, "[Rec] 2" does a fine job of providing an evening's worth of absolute terror without insulting your intelligence in the process. And while I'm not thrilled with the idea of another sequel, I can't say I wouldn't turn down the opportunity to check it out should the opportunity present itself. As far as modern horror is concerned, the "[Rec]" series is quickly clawing its way towards the top of the heap, and cements Balaguero and Plaza as the undisputed kings of Spanish horror. Despite my initial doubts and apprehensions, "[Rec] 2" is worthy follow-up to the one of the most terrifying films I've ever seen. I'd almost forgotten what a good sequel feels like.