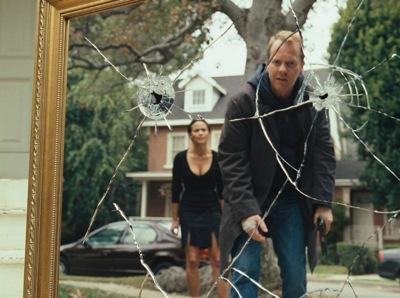 Bloated as it is with cliche, Alexandre Aja's "Mirrors" really doesn't require much of a synopsis. The film's very core — haphazardly constructed around the fleeting existential angst one feels when looking into a mirror — is worn so thin, so quickly that it is rendered ridiculous almost from the outset. A remake of a 2003 South Korean film, "Mirrors"'s one true virtue is that it provides a glimpse of what other J-horror fare might be like had it been gore-ed up for an R-rating. But even Aja's relative skill at deploying grisly action couldn't buoy a story that otherwise felt too often off-kilter and downright silly.

Just so we're all on the same page, "Mirrors" is the story of Ben Carson, fallen-cop-turned-security-guard. He's a walking bundle of cheap characterizations. He turned to drinking to ward off the stress of loosing his police gig, which in turn led to the loss of his family. He's down and out, and otherwise, there's little about him we know, or ever need to know. Ben's able to nail down a job as the night watchman for a once prominent department store that has stood desecrated ever since a fire rendered it a ghostly shell. The eponymous mirrors in this building, however, all appear untouched, and from his very first day these mirrors take an unnatural interest in Ben, and eventually in everyone that he loves.

As it was written "Mirrors" really lives or dies with the character of Ben, and because of this, the casting of Keifer Sutherland seemed like a good choice. He's undoubtedly a strong presence and has shown, at least in his TV work, that he can carry a production. Unfortunately, someone may have forgotten to tell Mr. Sutherland that he was playing Ben Carson, and not Jack Bauer. There are many similarities between the two characters, but it doesn't help that Sutherland (whether prompted by Aja or not) occasionally veers wildly into Bauer-mode. It may be that Sutherland will have to truly break the mold to get away from the associations with his "24" character, but judging by how frequently the film leaned on the Sutherland-as-Bauer mystique, one can only assume it was an intentional decision here.

That casting decision is the most superficial of the films' problems, though it certainly set the stage for others. Like virtually every film in the J-horror mold, "Mirrors" is structured like a mystery film. In some instances, this combination of whodunit tension and horror induced anxiety can make for a potent cocktail. In many ghost stories — not just those that have been making their way out of Japan, Korea and Thailand in recent years — the central character is a detective or journalist or just a curious soul who stumbles onto a supernatural thread that needs to be followed to its conclusion. The problem is, for this narrative device to function, the detective work needs to be believable and interesting in its own right, and that which must be detected cannot strain the ability of the audience to suspend disbelief.

"Mirrors", sadly, fails at both of these efforts. Carson never truly seems to earn his information through anything other than luck, and the bread crumbs are sprinkled by Aja such that there's not a whole lot of guess work to be done by the audience. Then, once Carson has achieved his goal and uncovered that which underlies the mirrors' ill behavior, the solution feels like little more than an after thought, cooked up to explain a ghostly phenomenon that the filmmaker thought would make for interesting cinematography. sexprice.ch

Thankfully, on that point, Aja guessed correctly. While from a plot perspective "Mirrors" never attains anything close to excellence, Aja has managed to imbue the film with enough visual style and flare that it almost, for the briefest of moments, overcomes its many flaws. The use of mirrors allows for several interesting framing choices, and the specter of the burned out department store provides ample scenery for some eerie scenes, particularly in the early going. The positives from a visual perspective are offset to some degree though, by poor use of CGI in a handful of spots, which wouldn't be nearly so bad if it wasn't so conspicuous.

More so than most, "Mirrors" can be read as a promising trailer that culminated in disappointment. The central premise ("the mirrors are possessed!") is just juicy enough to sustain a two and a half minute clip reel. When stretched to feature length, "Mirrors" veers away from the slow burn of a good ghost story until it crashes headlong into monster movie tropes (which wouldn't be awful in and of itself, but when Act I and Act III clash, well, that's not a good thing). That no other actor can match Sutherland's over-the-top-to-the-point-of-distraction intensity makes for a tough ride. At over an hour and 45 minutes, "Mirrors" first pushes the audiences to the brink of incredulity, and then plows right on into madness. The film's climax, and brief denouement, do provide some thrills and even a cute little twist, but by that point it's too late. "Mirrors" fails to reflect back any coherent anxieties, and outside of a few jump scares, offers little in the way of horror for genre fans.