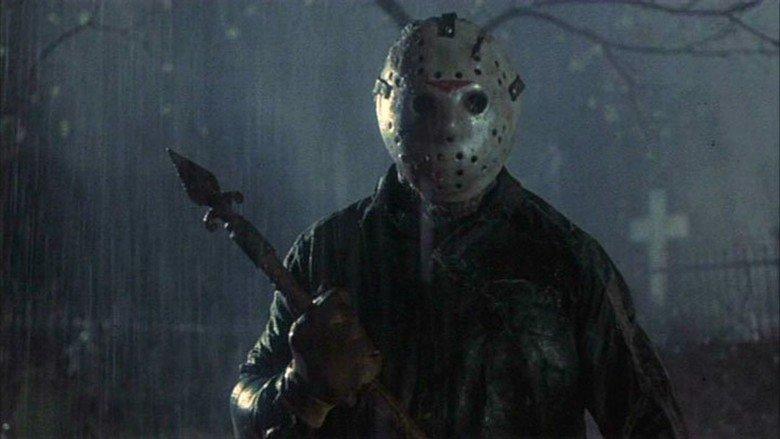 This is the sixth installment of our head-to-head review between the A Nightmare on Elm Street and Friday the 13th franchises. Check out what Sophie had to say about the corresponding Freddy pic here!

When Friday the 13th Part V: A New Beginning hit theaters and attempted to pass the mantle of machete killer to grieving father Roy, the series hit a wall that seemed almost impossible to overcome. The main killer as done by Jason had essentially just gained his land legs, donned his infamous hockey mask, and formulated his killing patterns by the time part five slashed him from existence. Thankfully the makers of part five even saw the bad move with Roy and tried to pull a similar tease ending like part four did with Tommy possibly becoming the new Crystal Lake slasher. However, in a turn of events and ultimately a needed blessing, Friday the 13th Part VI: Jason Lives brought back the one element that worked in all of the previous films: Jason. This is Jason's world and the laws of man need not apply when it comes to enacting his hobby-like revenge. Despite being the sixth iteration in a series that arguably should've ended with part one, Jason Lives is a surpisingly energetic, whimsical, and bloody good time.

Previously on Friday the 13th, Roy had been foiled as the verklempt and vengeful father behind all of the copycat Jason killings. Sprawled on a bed of spikes and no possible signs of living, the killer was seemingly banished, until Tommy unsheaths a knife and dons the blue accented mask to take on his rightful role as the new killer. However, instead of becoming a killer, Tommy leaves the half-way house and becomes a completely different person (now played by Thom Matthews)! Hell bent on assuring Jason is rotting in the ground, he unearths the corpse of the Crystal Lake killings and stabs him with a pole. Acting as a conduit, the rod is struck by lightning and resurrects the hockey masked icon. Jason is back and now endowed with zombie-esque qualities including super strength and the ability to make 007 references. Tommy attempts to warn the new sheriff of the neighboring town of Jason's return, but Sheriff Garris (David Kagen) doesn't bite. His daughter Megan (Jennifer Cooke) does fall into Tommy's arms as a believer as the pair trecks through the woods to find Jason and bring an end to his reign of terror. Once and for all.

The opening sequence of part six reveals just how goofy this film is going to be. Jason steps into frame channeling James Bond and slashes at the screen to bring blood flooding down the picture. Not only is this riffing on other pop culture, it's revealing just how much Paramount realized that focusing on Jason as somewhat of an anti-hero was the key to filling the seats. He's a killer who will make no mistake in ending anyone's life, but also has an endless supply of lovable zombie charm. Throughout the film there are scenes that depict Jason in a somewhat comedic manner. One of the Police Academy type paintballers in the woods shoots at Jason and he glances down as if to say "are you kidding me?" to the camera. Another point has Jason nailing a man right in the face as the camera then jumps to a dartboard as if to say "bulls-eye!" as well. Jason may not be able to talk but he sure does perform. Interestingly though these moments do make the film seem more fun and hit the right tone for the series. With that said, it's not all giggles and riffs as Jason gets in some pretty hardcore killing. Crushed faces, darts to the face, bodies bent in half, and even a heart ripped out are just a few of the methods to this new, more confident Jason. The inclusion of actual children in the film also gives it a little more edge since the past entries have all been focused around teens being stalked. Of course young Tommy and Reggie from the last films were younger but they were the untouchables. Here there is an entire camp of kids ready for the possible slaughter. While no deaths occur in their group it is a gutsy move to even flirt with the idea of Jason taking some youth.

Another interesting point this entry makes is giving Jason somewhat of an equal to battle against. Halloween had Laurie Strode, A Nightmare on Elm Street brought Nancy forward for some entries as Freddy's nemesis, and here Tommy is displayed as that final girl. His idea to return Jason to the lake, while coming from nowhere, does have a gothic quality that works for a movie that began with a Frankenstein-like resurrection scene. The movie no longer followed the formula of Jason stalking and killing to reach his final victim, it was like a ticking time bomb for Tommy to diffuse before it could do more damage than it already had. Overall, Friday the 13th Part VI: Jason Lives is arguably the strongest film in the franchise. It has a sense of humor that appeals to fans of the series as well as those skeptical of it, the staple methods of Jason's killings, a committed plot, and the formative return of who makes the series breathe air.

Most Creative Kill: The RV death has to win, hands down. As Nikki struggles to gain footing in the speeding RV, Jason emerges from the tiny bathroom to pull her in for a quickie. Of course, for Jason a quickie means something entirely different than it does for Nikki. He bangs her around a bit to then slam her face into the RV wall and shove it so hard that the wall pushes out leaving an indentation of her face a la Han Solo.