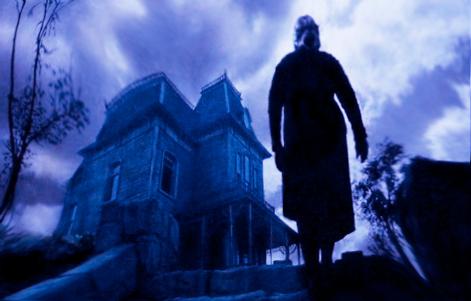 Anthony Perkins would’ve been 77 years old on April 4th, 2009. Sadly, Perkins was diagnosed with AIDS after a blood test in 1990 and eventually died from pneumonia in 1992. Perkins was a well established stage and television actor before he was tabbed by Hitchcock to play Norman Bates in “Psycho” in 1960. After “Psycho”, he would go on to enjoy a solid film career centered more on European productions than domestic work.

The reason for this was that domestically Perkins could never really outrun the specter of his Bates performance. Or perhaps more correctly, the perception that he was best suited to occupy the crazy chair for whatever production he was involved with. Undoubtedly it became tiresome for the man who initially balked at the idea of reprising his role as Norman Bates when approached about a sequel in the early 1980's. According to “Psycho II” writer Tom Holland, after reading the script for the follow-up, Perkins had a change of heart. Whether it was the cleverness of Holland’s storyline or a sense of resignation, Perkins and Bates were reunited in 1983; 23 years after their first go ‘round.

“Psycho II” picks up the story of Norman Bates in present day as he is being released from the asylum that has housed him for two decades. He returns home to Fairview, California and the Motel/home where in 1960 he wrestled with his maternal demon and lost. He takes a job at local diner and tries to reintegrate back into small town life.

Predictably Normy has his share of detractors and antagonists who are not at all convinced that his slicing days are behind him. At the Diner he meets Mary (Meg Tilly), a kind young waitress with a need for stable housing. Norman invites her to stay at Casa del Bates and the two become fast friends. Bates finds his first big challenge in the form of Warren Toomey (Dennis Franz). Toomey is a caretaker who turned the Bates Motel into a stop and pop with hourly rates during Norman’s absence. Upon discovering that his beloved roadside rest stop has been turned into a den of iniquity Norman fires Toomey. Toomey then calls Norman out at his diner job, and is murdered soon thereafter by a faceless matronly mauler. Before long other townsfolk go missing, characters from the first film reappear and Red herrings abound. Norman’s fragile emotional threads begin to fray and the bloody legacy of the Bates estate is revived.

“Psycho II” would be a great follow up to good film, if it was in fact following just a "good" film. Being the sequel to the most roundly lauded and referenced horror film of all-time inevitably knocks it down a few pegs. Director Richard Franklin does a good job of balancing his Hitchcock nods with the need to update the material. He also salvages the essential element of the original.

Anthony Perkins was born to play Norman Bates. His original portrayal advanced the idea of character quandary within a horror film by leaps and bounds. Norman is victim and monster, wounded kid and fiend. He is not Frankenstein’s monster or Quasimodo because while he is misunderstood, he is dangerous even to those who understand and sympathize with him. For many audiences in 1960, a handsome beast with murderous old hag living inside him was simply too much to bear. In 1983, Perkins' second turn as Norman may have no longer carried an element of surprise, but it was even more essential for the audience reactions to “Psycho II”.

The supporting cast here is very good, highlighted by Meg Tilly as Mary, but Anthony Perkins is the reason to watch. He plays Norman as skittish, winsome, menacing, charming and clueless, and does so in just the right doses. He is also chiefly responsible for the success of the film’s irony. Whenever the movie threatens to lose the viewer by being a too goofy, a smirk appears on Perkins face to remind us that while being crazy in the Norman Bates way is about rage and fear, it’s also about being in on one of cinema’s greatest inside jokes.

For his part, Franklin does his best to keep the sense of malignant delight and fun that old Alfred layered into his best work. Another feather in Franklin’s cap is the pacing of “Psycho II”. The narrative is always moving forward as the tension continuously builds. Tom Holland’s script has a lot to do with the film’s effectiveness as well. Holland makes sure that Norman has plenty of hostility and suspicion to contend with during his pursuit of sanity. And while the script does have some lapses in logic around its characterizations (particularly Mary), it is very well structured and pays off big in the final scene.

“Psycho II” opens with a trimmed version of the original shower scene but it becomes clear pretty fast that there is no artistic match attempted here. At least not where trying to master montage, sound and mis-en-scene is concerned. Instead the art is left up to the player, Anthony Perkins. And that is the best choice that could’ve been made. Norman Bates returns home and the audience gets everything it could want from a sequel to a landmark film. Well, short of a second landmark film I suppose, but even Hitchcock himself might have had a hard time pulling that one off.