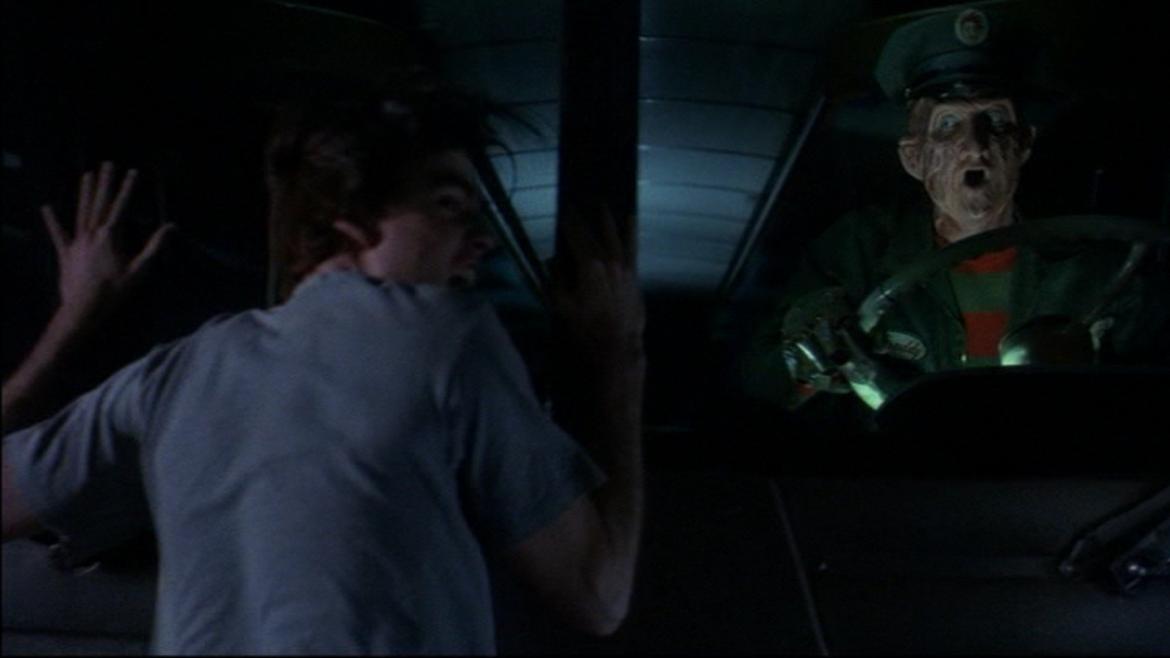 This is the sixth installment of our head-to-head review between the Nightmare on Elm Street and Friday the 13th franchises. Check out what Evan had to say about the corresponding Jason pic here!

With the sixth installment in the A Nightmare on Elm Street franchise we have reached the end of the official cannon and all bets are off. If you have been following along as I have reviewed these movies, you will be well aware that I was not a fan of the last film, The Dream Child. Apart from its bonkers plot, Freddy seemed off his game and there were only a few kills, and they were nothing to write home about. Here, we’ve gone back to the drawing board and the results are mostly good.

After a Nietzsche quote, followed by a Freddy quote, a black and white map of the United States appears, with Springwood, OH clearly marked. Through a series of text, we learn that we have jumped ten years in the future since the last movie. In that time, all of the children of Springwood have fallen prey to Freddy, save one. Maggie Burroughs works at a shelter for runaway teens in some nearby town and is suffering from confusing dreams. When a young John Doe - who refuses to sleep- is brought to the shelter Maggie thinks that maybe together they can find the answers they need.

Maggie and John head for Springwood, with three other teens stowed away in the back of the van. What they find is a town full of depressed and deranged adults and not a lot in the way of answers, except that Krueger had a child who made it out. Things really start picking up when the three stowaways accidentally stumble upon the old white house on Elm Street and Maggie is forced to accept that Krueger may not be as dead as she thought. The movie sets us up to think that John Doe is the mystery child, who is convinced that this is why Freddy has allowed him to live for so long. When he goes into the dream world to try to save his friends, however, Freddy reveals that his child was a girl, and he had simply been using John to get his daughter back to Springwood. As John dies in Maggie’s arms, Freddy somehow hops into her body and with that the fear of Springwood has been unleashed on the world. It’s up to Maggie to find the truth and defeat her father.

The final act of the movie finds Freddy somewhere between the dream world and our corporeal reality. Maggie, with the help of a man named Doc and one of the young patients, named Tracy works to find a way to save the day. Doc, who is able to control his dreams, teaches Maggie about an ancient legend of demons who are able to manipulate dreams and he helps her to go after Freddy. We get Freddy's backstory, as well hers and when the two finally face off in the end of the movie, crazy fisticuffs ensue (including throwing starts), before Maggie says "Happy Father's Day" kissing Freddy's cheek before she blows him up.

As slasher franchises from the seventies and eighties cranked out more and more titles, time marched on and the growing pains were not always well hidden. Tropes and stories that had become part of the common language and lore for the likes of Michael and Jason sometimes stifled the growth of the legacy. The Nightmare on Elm Street films, however, were being released so quickly and so closely together, that there wasn’t a lot of opportunity for time to move much further ahead of the films. Freddy’s Dead is very distinctly a product of the early nineties, with celebrity cameos - like Johnny Depp in a “this is your brain on drugs” PSA and Roseanne Barr and Tom Arnold as a childless couple in Springwood - as well as all sorts of cultural references from The Wizard of Oz and A Princess Bride to NES gaming. The Nightmare movies have also, to this point, refused to take themselves too seriously, walking a line between absurd and creepy and placing a toe (or ten) on either side every once in a while. This movie goes whole hog into a tone that bordered on slapstick in more than one scene. Freddy is also back to his old self, quipping with his victims and vogueing as though he is, on some level, aware of the film audience. Even with much more history and backstory than we’ve gotten so far, this movie manages to stay squarely in the kind of territory that Nightmare does best.

Body Count: Three (tied for lowest in the franchise with Dream Child)

Most Creative Kill: This award goes to the silliest and most drawn out death in the movie. Breckin Meyer, in his on screen debut, plays the teenage son of a wealthy business man who doesn't understand him and has shunted him off to a shelter to be "fixed". Stoner Spencer falls asleep on the couch and wakes to see Johnny Depp's PSA before being pulled into a trippy TV landscape. From there, he becomes the character in a video game where he is fighting a pixelated version of his father, but Freddy has his hands on the controller. Spencer bops around the house while everyone tries to stop him, only to fall down the stairs into a deep chasm that opens in the floor, while Maggie stands by and does basically nothing.