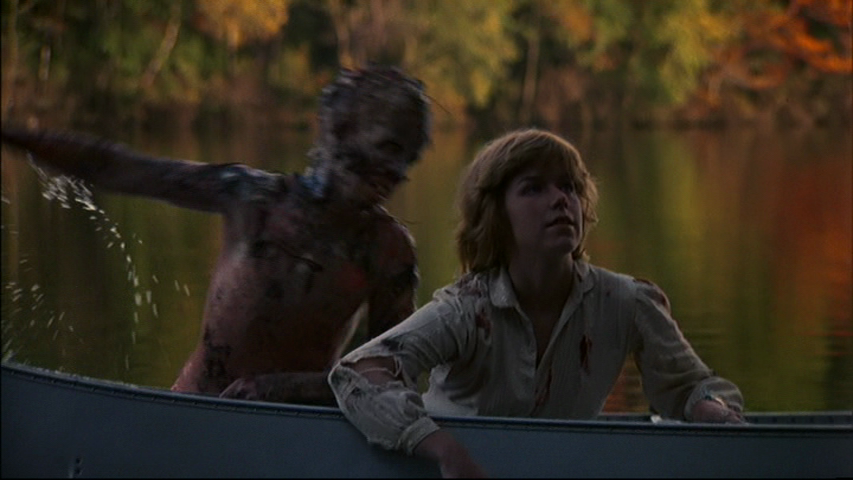 This is the first installment of our head-to-head review between the A Nightmare on Elm Street and Friday the 13th franchises. Check out what Sophie had to say about the corresponding Freddy film here!

With the success of the iconic holiday slasher film Halloween in 1978, other low budget filmmakers were seeking out possible concepts to follow up with the new slasher renaissance. Enter Sean S. Cunningham, producer of The Last House on the Left in team with Wes Craven, as the director of the summer camp horror flick Friday the 13th. Due to the mega success of the entire Friday the 13th franchise, including nine additional films and a remake in 2009, looking back on the original film conjures up several points of enjoyment but also confusion. With a series led by the anti-hero of Jason Voorhees, the fact that part one of his story didn't realize the potential of the character is interesting. Instead of a hack and slash, Jason gets the girl type romp, the original Friday the 13th is much more of a murder mystery mixed with the mother and son psychosis of Hitchcock's Psycho.

Camp Crystal Lake has finally opened its log cabins and starry skies to the new counselors ready to watch over kids in the hot summer months. Despite the murder of two young teens years before as well as continual issues with water contamination, the camp has been repurposed for children to spend their holiday break in its woods. As counselors begin to show up for duty, the infamy of "Camp Blood" begins to pour out from townsfolk. Steve Christy (Peter Brouwer) wrangles up his counselors to get the camp ready for the new kids to stay. Alice (Adrienne King) shows the most care for the camp while Marcie (Jeannine Taylor), Jack (Kevin Bacon), Bill (Harry Crosby), Ned (Mark Nelson), and Brenda (Laurie Bartram) are all giving their time to Christy for different reasons. When the final counselor, Annie (Robbi Morgan), never makes it to camp for duty, the other counselors grow suspicious that Camp Crystal Lake hasn't shaken away its bloody past. A mysterious killer has returned to the camp and begins to pick off the counselors one by one. Who this killer is remains a mystery until the final moments with Alice by the lakes edge. Is it crazy Ralph (Walt Gorney) from town, tight short camp owner Steve, or the killer from years ago seeking revenge?

Looking at Friday the 13th with modern knowledge, it's difficult to find the murder mystery aspect as strong as it was to audiences in 1980. When the killer is revealed it breaks the rules of the murder mystery template due to the mystery figure being someone never shown on camera during the first two acts of the film. Nowadays it's famously known that Mrs. Voorhees, played by Betsy Palmer, is the killer in the film and not one of the other characters set up as the possible mystery figure. Setting the mystery aside, once that cheat is looked past, the overall movie works well. Mrs. Voorhees killing teens in order to gain revenge for the drowning of her son Jason is a nice and eerie motivation for the murders. Portrayed brilliantly by Palmer, Mrs. Voorhees has a relationship with Jason that is reminiscent of Norman Bates and his mother, just flipped. Mrs. Voorhees flips from concerned parental figure to murderous mother whispering in Jason's voice "Kill her, mommy! Kill her!" that really drives home the insanity. It adds layers to the character that make it feel like a higher caliber slasher flick in the same ball park as Halloween. Truthfully Halloween was the blueprint for this film, as was Psycho for the psychological aspect.

The Tom Savini gore effects were also a key factor in setting this film up for success. When characters are killed throughout the movie there is more of a focus on showing the final damage and gore in full light. Marcie's death in the bathroom where she receives an axe to the head lets the shot stay on her impaled and bloody face. The death of Mrs. Voorhees also has the grit that blood thirsty audiences clamored for as Alice whacks her head off with an axe. Moving away from gore, the set ups for scares also worked well. Not all deaths were shown on screen and were saved for Alice to find in the end, much like Laurie Strode's encounter with her friends dead bodies in Halloween. The suspense is built through scenes like Alice hiding in the pantry from Mrs. Voorhees, a subtle hand moving in the shower stall behind Marnie, and ultimately figuring out who the killer could possibly be.

Despite decades of enhanced digital effects and the slasher genre coming to a close, Friday the 13th still shows its diplomacy as a trailblazer for the genre. While the overall mystery may have been somewhat of a cheat, the attention on kills and pushing a vengeful killer on unsuspecting teens made it an early blueprint for future slasher and horror movies to follow. The entire cliché of "have sex and die" is more prevalent here than in Halloween, interestingly, which gives it its own street cred in the genre. The final scare of young Jason jumping out of the lake easily places this film in the must see list for any horror fan and cements it in the pantheon of classic slashers.

Most Creative Kill: Hands down the most creative kill goes to...Kevin Bacon! While Jack is relaxing in his bunk of steamy love, his throat gets a little scratchy due to the arrow piercing through it! It's an iconic kill that not only left an impression with audiences, but also put the effects master, Tom Savini, on the map.