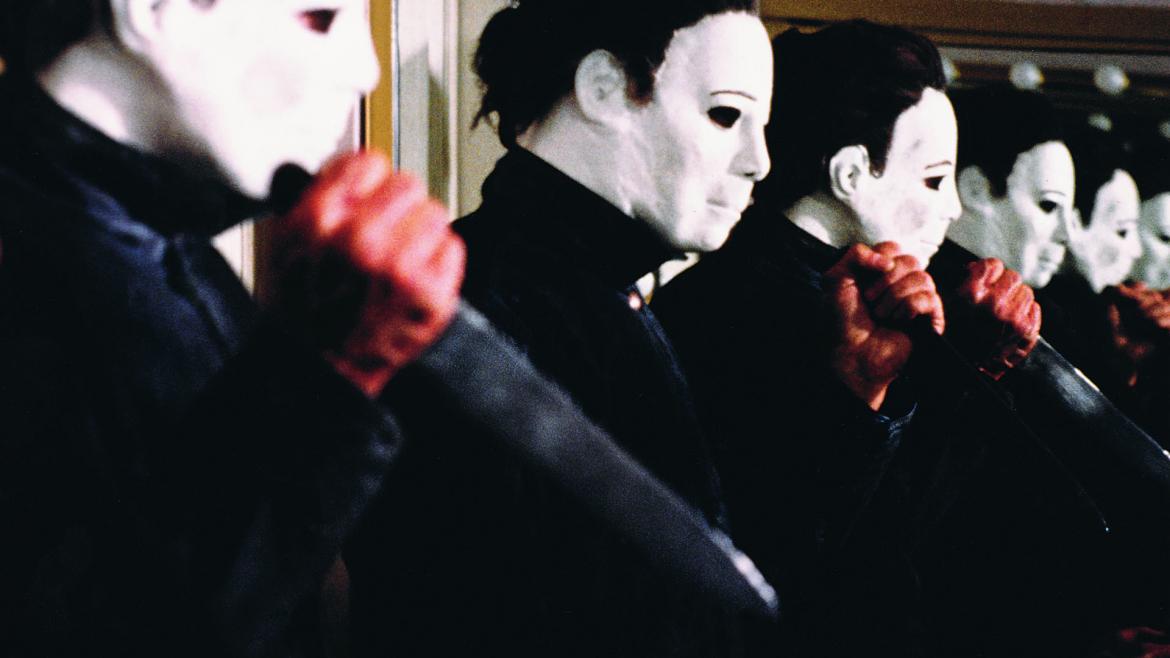 The first three films in the Halloween franchise were all released in quick succession, but after the release of Halloween III: Season of the Witch in 1982 met a disappointing performance at the box office, the franchise retreated to lick its wounds and recuperate for a while. Whether or not the failure of the third film was due to its attempt to depart from the original story and create an anhology or from the fact that it's just a pretty bad movie is unclear, but what was clear was that it was time to go back to the drawing board. The producers felt that their best bet was to bring Michael back.

When Halloween 4: The Return of Michael Myers opens, it has been ten years since Michael’s fateful homecoming. Now, you may be wondering, “wasn’t he killed in the explosion and subsequent fire at Haddonfield Memorial Hospital at the end of the second movie?” Great question! Luckily, a helpful security guard is here to present an exposition dump. It turns out that both Michael and Loomis survived the blast with just a few scars (and a limp for Loomis). Michael is being loaded into a auspiciously unguarded ambulance to be sent back to Smith’s Grove—the sanitarium he escaped from in the first movie—just nights before the anniversary. Much like in the first two films, no one really understands the gravity of who (or what) they’re dealing with and everyone treats Dr. Loomis like he’s a complete wacko. When the ambulance transporting Michael is found on the side of the road full of bloodied bodies, the doctors and police refuse to believe what Loomis already knows; Michael has escaped and is headed back to Haddonfield to finish the job he started.

Back in the small Illinois town, Laurie Strode’s daughter Jamie (played by horror darling, Danielle Harris in her first role)—whose age makes for some interesting math—is an orphan living with the Carruthers family and having haunting dreams about a “nightmare man.” Her adopted sister, Rachel, is tasked with taking Jamie trick-or-treating and so the pair venture out, completely unaware of the danger that they face. From here on out it isn’t unlike the earlier installments in the story, except that now, the legend of the Boogeyman has grown bigger, with local youths dressed up in Michael’s signature mask and coveralls and local men out for vigilante justice.

As far as sequels and remakes go, this movie isn’t too egregious. After the third film detoured into science fiction, this film turns the wheel back and barrels headlong into slasher territory; with an opening kill in which Michael sticks his thumb right through someone’s skull. The kill ante is way up overall in this movie with the highest body count so far, and while some of those deaths are relatively nondescript and others occur off-screen, there are enough that are inventive and memorable to create some genuine fun as Michael heads out on another killing spree. Return also takes a cue from Season of the Witch in breaking a common horror taboo, and making the target of Michael’s rampage a young girl.

This portion of the story certainly does still leave some things to be desired, however.  Laurie’s death and absence from the movie is passed off with little to no background or context, which may be a bit hard to swallow for fans of the orginial scream queen. Jamie Lee Curtis isn’t the only major piece of the puzzle who is missing when Michael makes his titular return either. Halloween 4 is the first film that John Carpenter was not involved with in any way. He submitted a treatment for this film, taking a much more psychological approach, but ultimately the producers decided to slash that idea in favor of a more physical threat like in the first two films. With that, Carpenter sold his options in the franchise and walked away. Loomis' character is also a bit problematic, remaining surprisingly static over the ten years that have passed since he was last in Haddonfield. He still spends the whole movie shouting at local law enforcement and trying to thwart Michael without much to distinguish this from their past encounters. Now I’m not suggesting a huge character shift is in order, but the lack of any kind of arc makes for some repetitive viewing, particularly if you’re consuming these films in even remotely quick succession.  And finally, what's up with Michael's mask? It looks downright comical. In most scenes, he ends up looking confused, which takes away from the overall effect.

All together, Halloween 4 is a pretty solid—if slightly boiler plate—slasher flick. You’re going to get some cool kills, some light nudity, and of course some ominously slow stalking, but this film is definitely sitting squarely on the right side of the line, before the franchise went totally off the rails.

Body Count: Nineteen (plus one dog, Michael does not like dogs)

Wounds Sustained by Michael: Hit by a car, shot somewhere between 7 & 20 times in police shootout, falls down mine shaft