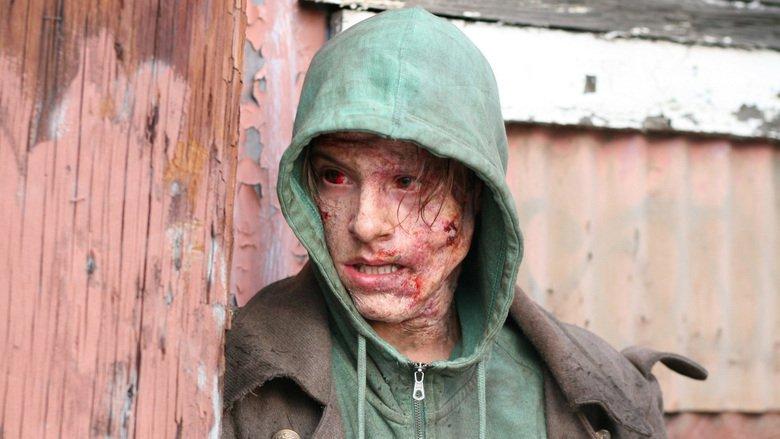 Bernard Rose will forever have a place in the annals of horror history and the hearts of genre fans with his boogeyman classic, Candyman. Unfortunately, we live in a time where moviegoers are more concerned with the "What have you done for me lately" style of thinking, and in that regard Rose hasn't really delivered anything to get excited about since. So why shouldn't it be a modern retelling of an old classic in the form of Frankenstein?

Rose's take on the classic monster is set in present day Los Angeles where husband and wife team Marie (Carrie Ann-Moss) and Viktor Frankenstein (Danny Huston) have created an artificial human with the assistance of 3D printing. A full grown man, Adam (Xavier Samuel), that possesses the mind and learning capacity of a child- or perhaps more accurate a nearly newborn baby. The goal was to create a being with the capability of fixing cell tissue, but when the experiment fails and Adam's skin begins to rot away a failed attempt at "putting him down" sends Adam on the run. Faced with a world he does not understand he is forced to learn through triumph and tragedy the purpose and origins of his existence.

The story follows Adam in its entirety. There's hesitation to say it's from his perspective- as none of it is presented in first person- but for all intents and purposes it is basically from his perspective. It's the voiceover that kicks in from time to time that sells this fact, but also tends to remove the viewer from what's happening because Adam's voiceover talks in such a clear and eloquent manner. The written aspects of the voiceover are almost poetic in the way Adam conveys what is happening to him on screen or what his thought process was in certain scenes, but the character on screen can't formulate more than one or two words cleanly. Still, the voiceover allows at the very least a unique insight to the "monster" that can't communicate properly if it were not there at all.

The key components to the original story manifest themselves in interesting if somewhat obvious and silly ways in Rose's update. For instance, the angry mob that comes to inflict mob justice on Adam after an incident seems justified enough, but quite frankly isn't all that plausible in a modern setting. The updates for the most part fit quite nicely in with the story even if though it seems like some could have use a finer touch to them.

The core cast provide all if not most of the highlights- including Tony Todd as the blind man who befriends Adam. Samuel is able to pull off some of the extremely awkward infantile behaviors Adam goes though- an aspect that could have turned this film into a total train wreck. Seeing as how the film relies on Samuel's ability to carry the film without much dialogue his grunts and facial expressions serve to tell a lot of the characters pathos- where the voiceover paints a vivid picture of an intellectual aspect of the character that never really manifests itself in the film.

Rose's modern take on Frankenstein tries hard to peel away layers to the monster as a tragic figure, but leaves about half of the picture on the table. There's potential in the script to turn this personal story into something grandeur, but Rose often settles for what's 'good enough.' Still, Frankenstein is a worthy update to a timeless classic that's missing a little jolt of electricity to make it great.