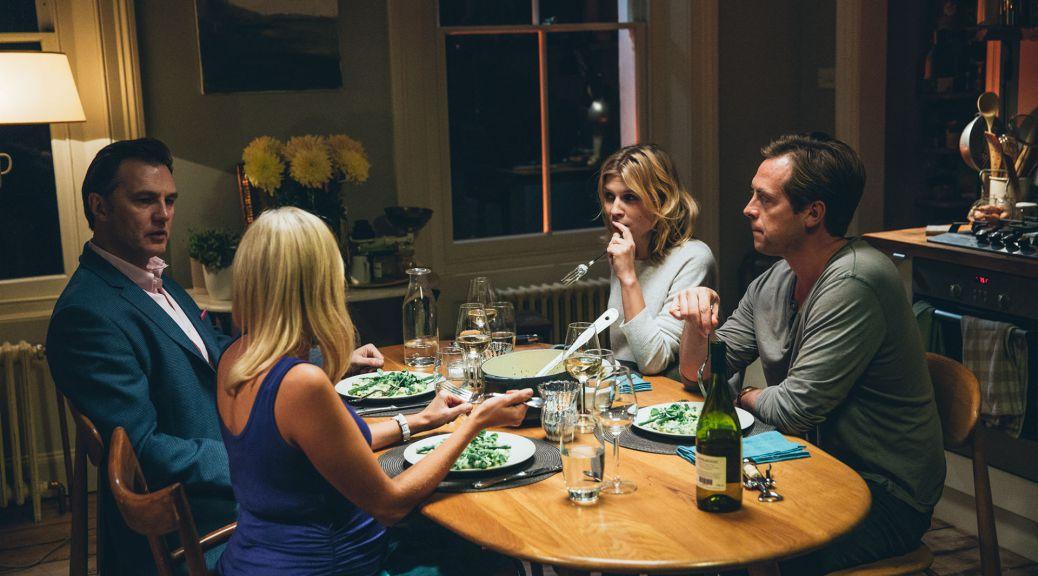 The Ones Below (Movie Review)

Giving people the benefit of the doubt is a natural human endeavor. At some point though--about the time someone goes so far as to call you a "c*nt"--that common courtesy should go out the window. Such an interaction occurs in David Farr's The Ones Below; a film that goes to great lengths to set an uneasy tone with the stresses of pregnancy and early parenthood, but is a little quick on the draw just before the credits roll.

How well do you know your neighbors? That is the question at the center of Farr's debut feature. Kate (Clemence Poesy) and Justin (Stephen Campbell) are a couple expecting their first child- a child Kate at one point wasn't sure she wanted. A tenuous relationship develops with their downstairs neighbors Jon (David Morrissey) and Theresa (Laura Birn) following a tragedy that causes Theresa to lose her baby. Over time Kate suspects that the couple have sinister intentions, but her family history may be contributing to an intense sense of paranoia.

Upon first look The Ones Below seems pretty straight-forward, but upon deeper examination one must suspend disbelief perhaps a little more than your typical thriller of the same ilk. Farr's screenplay borrows heavily from masters within the thriller/suspense genre and he never quite finds a way to innovate. Instead, the director relies heavily on mood and the personalities present in the cast to carry this one to the end.

Fans of The Walking Dead will recognize Morrissey- though maybe not without his eyepatch- as The Governor from that particular program. The rest of the cast isn't nearly as recognizable, but all pull their weight well. Morrissey is stoic yet abrasive, matching well with Birn's trophy wife antics. Poesy and Campbell perfectly convey the stresses of first time parents- both in the struggles with their child, but outside disturbances that are stretching their relationship thin. It's the subtle details that upon closer look the viewer will begin to pull away certain tricks and see where the film is going very early on.

The Ones Below is well written and Farr shows confidence in his direction, but the familiarity is hard to shake. Combine some of the nagging similarities to legendary talents with the rushed and telegraphed ending and the film shows there are areas for Farr to improve. Even still, coming out of the gate with something as restrained as this shows that the auteur has plenty of potential to explore. The Ones Below falls short of greatness, but conjures just enough chill to leave it rattling around in your brain for a short time once its over.