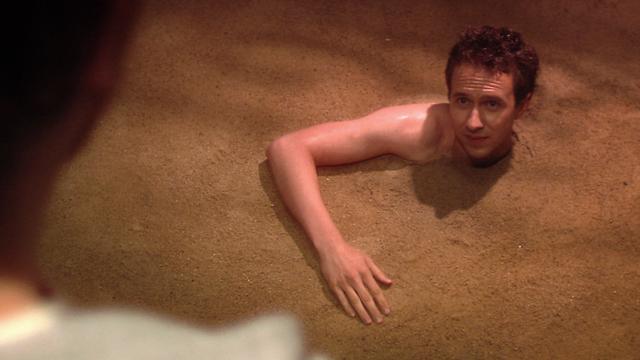 What do most viewers want out of a movie where a guy finds a living human hand growing out of the floor of his basement? Is it: a) to see a love triangle involving two men and a nine-fingered girl, b) to be serenaded with half an album’s worth of coffeeshop-ready Adult Contemporary songs, or c) to find out what the hell is up with the whole hand situation? If you said “C”, you must not have been involved in making “Growing Out”, because the filmmakers behind this movie clearly care much more about points “A” and “B” than they do about their movie's main point of interest.

Even though the back-of-the-box synopsis of “Growing Out” is that it's about a guy who finds a hand growing out of his basement floor, that’s not what it is. Actually it’s a musical about an aspiring singer-songwriter who falls for the girlfriend of the weird, abusive dude who lives in the trailer in his backyard. The hand growing out of his basement floor - that's just an afterthought. Don’t worry too much about that. It never really affects the plot or has anything to do with anything else in the film.

Tom is a down-on-his-luck singer-songwriter so hapless he manages to get himself fired from an open-mic night. One day he comes across a one-armed man playing guitar in a charming scene that is easily the best two minutes in the entire film. The one-armed guitarist offers him a job as a caretaker for a dilapidated old house with a crazy old recluse of an aunt living upstairs. Tom takes him up on the offer and soon finds that in addition to the old aunt, there is also an off-kilter weirdo with little respect for privacy living in an Airstream trailer out back. The weirdo, Philip, has a wannabe musician girlfriend named Veronica who makes up for her missing ring finger with a nifty, screw-on guitar slide.

In the midst of this dense fog of self-conscious quirkiness, Tom discovers the hand growing out of the basement floor. Over the course of the movie the hand grows until Tom essentially has an immobile roommate rooted in the basement. Archie, as Tom names his basement buddy, is not only Tom’s biggest fan, but also his confidant. Tom plays songs for Archie and tells him of his developing illicit relationship with Veronica and Archie responds by being chipper and earnest because apparently his personality doesn’t bloom until later in the season. It’s all a bit tedious and forced, with the occasional musical number thrown in. Yes, “Growing Out” isn’t just a quirky indie comedy masquerading as a horror movie, it’s a quirky indie musical masquerading as a horror film. Unfortunately, the music is mostly the kind of unmemorable mid-tempo snooze-ballads favored by what American Idol calls “rockers”.

From the perspective of the horror fan, maybe the most egregious sin committed by “Growing Out” is that despite the way it’s being marketed, this is not a horror film. Not even a little bit. It’s not a horror movie with comedy undertones, it’s not a comedy with horror undertones, it’s a quirky rom-com that wasn’t confident enough to stand in its own genre so it swiped just enough horror elements to try to bring in a different audience. Turns out the magic number is three.

Horror element number one: the grotesque Southern Gothic tone. There's a creepy unkempt antebellum house, a town where every other person has a deformity or is missing a body part, and a crazy aunt who lives upstairs and is never seen. All of these plot elements are introduced and seem to point to a bigger mystery only to be promptly dropped and forgotten about.

Horror element number two: Archie. The movie’s called “Growing Out”. It’s about a man growing out of the floor of the basement. It’s the central image and main selling point of the movie. As a story element it’s also a red herring that never goes anywhere and doesn’t affect the plot in the slightest. If all the scenes with Archie were changed from a plant-man growing out of the ground to a regular roommate who, say, just hung out on the sofa all day, the rest of the movie wouldn’t have to be changed one iota. That’s right - the guy growing out of the ground that gives the movie its name and the image for its poster and is the film’s one unique element has no reason to be in the movie. It’s tempting to call Archie a MacGuffin, but a MacGuffin gives the characters motivation and moves the plot along. Archie serves no purpose whatsoever.

Horror element number three: the ending. Not to get too spoiler-y but the end of the movie does involve one of the characters going crazy and chopping up a few other characters pretty much out of the blue. It’s almost like the filmmakers finished telling the whimsical musical love triangle story they set out to make and then realized that if they were going to sell this as a horror movie somebody had better start flipping out and killing people, even if they only have the flimsiest of motivations. It reminds me of the bit on The Office where Michael Scott pulls an imaginary gun on his improv partner anytime he doesn’t know how to keep a scene going. Why is there axe murder in this movie? Because they had to end it somehow.

So what happened to “Growing Out”? I’m not sure. It’s tempting to blame it on studio intervention and say that these guys wanted to make one movie but the suits demanded a horror movie. That doesn’t add up though because it doesn’t get much more indie and low-budget than this. Maybe it was a brilliant marketing decision when they realized that indie relationship comedies that aren’t written by Diablo Cody don’t tend to make any money but that even awful horror movies tend to be profitable.

If that’s the case, I salute their marketing savvy and then give them the finger for cashing in on my genre. The most likely explanation is that the movie’s a mess because a few enthusiastic first-timers thought that cramming every hemp-fueled idea they came up with into one movie would be awesome, even if none of it held together in a coherent fashion. Unfortunately not every idea is a good idea and the most interesting parts of the story were left wilting in the background. Some people might mistake "Growing Out's" kitchen sink kookiness for genuine originality but the hard truth is that just being different doesn't make a movie good.