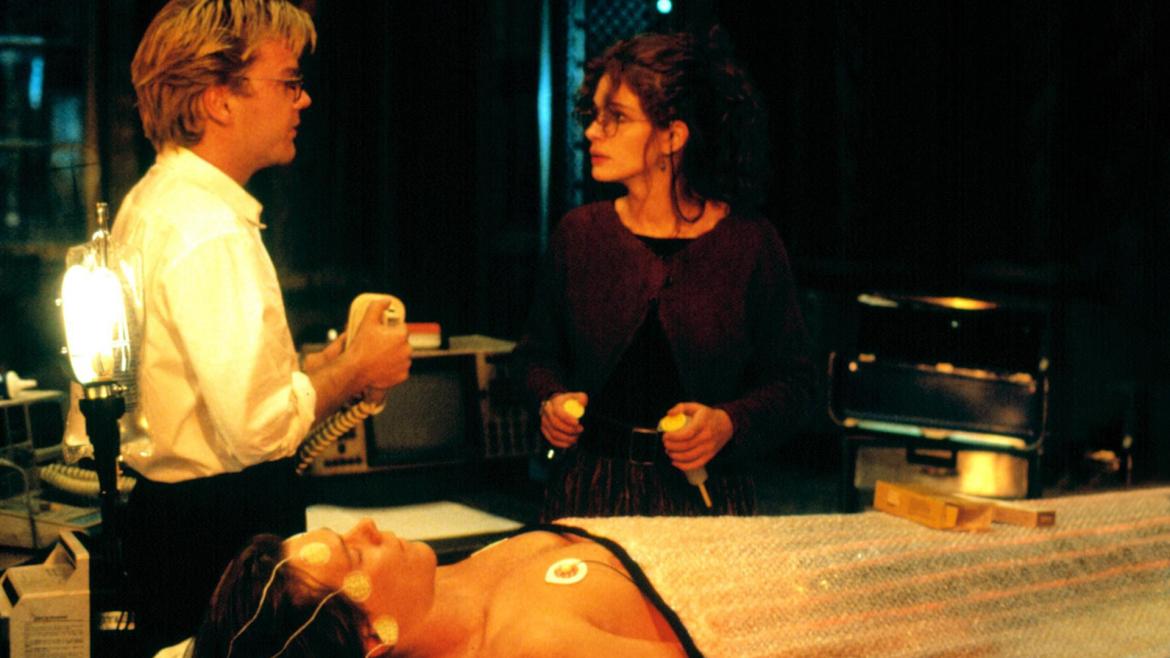 As horror remakes go, are some are easily predicted. A new Friday the 13th? Makes sense. How about a return to Elm St? Sure. When a property is so well-established, it is to be expected, but when word began circulating about a forthcoming reimagining of Joel Schumacher’s Flatliners, I doubt there were many who could truly say they saw that coming.

Released in 1990, just a few short years after they worked together on The Lost Boys, Joel Schumacher and Kiefer Sutherland were back together. This time, instead of an immortal, bloodsucking rocker, Sutherland plays a rebellious medical student with a god complex, willing to experience death in order to make a name for himself. Like The Lost Boys, Flatliners brings together a veritable who’s who of rising stars, surrounding Sutherland with Kevin Bacon, Julia Roberts, Oliver Platt, and William Baldwin.

The premise is simple, five friends agree to medically induce death in order to experience and research near death experiences (or NDE’s). Carrying out their research in secret, they take turns going under–each one staying dead a little longer than the last–in order to discover what comes next. And they would have gotten away with it too, if it weren’t for the pesky ghosts from their past that refuse to stay dead.

The nature of these ghosts is interesting to break down. Nelson (Sutherland), David (Baon), and Joe (Baldwin), are all haunted by individuals whom they have treated unfairly, bullied, or taken advantage of. Nelson and David, in particular, are forced to confront thing they have done and live that experience from the perspective of their victims before they are allowed to find closure. Rachel (Roberts) on the other hand, is haunted by the memory of her father, who committed suicide when she was a child. There was nothing that she could have done to prevent or change that outcome, and closure for her meant accepting that his death wasn’t her fault, and letting him go. The fact that these stories are split so starkly along gendered lines, along with the fact that Roberts is given less to do as far as the experiment goes, speaks to gender disparities in Hollywood storytelling that will hopefully be improved upon in the upcoming remake.

The film, as well as its protagonists, is primarily concerned with finding a new frontier for the younger generation. There is no wild west to discover, and space has been reached, what will these young men and women have to show for themselves and how will they be remembered? In this way, it is a fundamental human question at the heart of this story. And Schumacher brings this point home, selecting dramatic sets that hearken back to gothic theater. The expansive and often palatial surroundings give the impression that this story is much larger than the five medical students that it revolves around, and much older at that.

I can still remember watching this movie for the first time, on VHS, on a family vacation to Tennessee one summer growing up. And I worried, coming back to it all these years later, that it wouldn’t live up to my memories, like so many films I watched during my formative years. But Flatliners does not disappoint. It is exactly the right amount of cheesy and dramatic, without forcing the viewer to throw all standards out the window. In fact, this movie was nominated for the Oscar for Best Sound Effects Editing in 1991, but lost to The Hunt for the Red October.

Only time will tell whether the new movie will live up to its source material, but whether it does or not, we’ll always have the original.