Empire of the Ants (Movie Review) 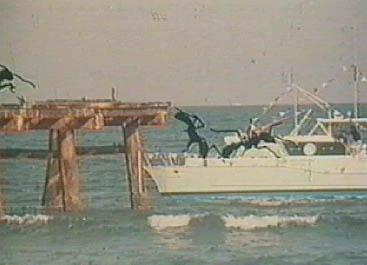 Joan Collins and Linda Evans staged the greatest series of Gmilf catfights in the history of television. Week in and week out on “Dynasty” Evans as Krystle would feign surprise at Collins’ (as Alexis) smirking rancor and someone would go flying down the stairs, take a full-tilt, screaming flat-hand across the chops, or be sent to bed without Metamucil and their Rejuvenique mask. Collins was always the more interesting one. Joan was of an uncommon sexual mixture. Something of a bosomy minx with a strangely drawn face, her sexy rep was owed less to her “Dynasty” work than the advent of HBO and Showtime and their willingness to run her early works “The Bitch” and “The Stud” on a loop after 11p.m. on weekends. Both of those films were based on books from the prolific pen of her sister Jackie. Raising the question, is it sexy or gross when one sister writes the sex and the other acts it out? Anyway, shortly before she consented to have her tits out for the sake of Jackie’s lubricious fantasies, Joan signed on to Bert I. Gordon’s “Empire of the Ants”.

In “Empire of the Ants” Collins plays unscrupulous land developer Marilyn Fryser who is leading a booze cruise with prospective buyers to a remote seaside locale. The boozy bundle of would-be buyers is comprised of deadbeat retirees, escapist divorcees, and an indiscriminate acquaintance rapist in-waiting played by Sgt. Joseph Getraer from “CHiPs”. After making landfall they drink, buffet, drink some more and then take a tram tour of several abandoned buildings. All the while Fryser tries to sell them on the potential of the scrubby, wind battered Pine Barrens and dilapidated structures. Even if they are willing to overlook the crappy amenities the giant nuclear ants lurking within the woods are sure to be deal-breaker. A churlish cheapskate in a powder blue leisure suit and his wife, in a matching powder blue leisure suit, are the first to feel the massive pincers, followed by a couple members of the woefully ineffective grounds crew.

After the ants piledrive their boat the group lights a very small fire that somehow keeps the colossal arthropods at bay through the night. Once day breaks ,the remaining members of the tour panic and run off towards a river in hopes of using the waterway to summon help from a town some miles away. Of course more people die, but a few survivors emerge from the thicket, including Joan with far too much of her clothing intact to make the trip’s hollowing repetition worthwhile. In town things go from bad to worse as the crew discovers that the queen ant’s pheromones are making good little workers out of the townsfolk. Can it be stopped? Or will the formidable formicidae take over the world? Most Importantly, will Joan really stay clothed and not get slapped by anyone?

There is good reason for Bert I. Gordon being a fixture on MST3K. 8 of his movies were brutally lampooned by the extraterrestrial trio during their televised run. Surprisingly neither “Empire of the Ants” nor Gordon’s masterwork “Food of the Gods” made that list. In the case of Empire’ the omission wasn’t for a lack of joke fodder. The film reuses the same ant-behind-glass footage superimposed over a dense cluster of trees no fewer than 5 times. The performance of one John David Carson maybe the most egregious case of chasing approval from those he’s playing against while the camera is still rolling that I have ever seen. And in an example of pitch-perfect stylistic error the film is shot and lit like a “Love Boat” episode. One without the benefit of Ted Knight, Nipsy Russell, or Barbi Benton to take your mind off of the uninteresting bits.

Perhaps the last factor is what has kept the movie out of Mike, Tom and Crow’s big-screen death camp. There is far too much run-up to the actual ant terror (here using the term ‘terror’ completely neutered of tension) We are twenty minutes in when we see our first giant drone and by that time we are full to the point of vomiting velour on the life details of the travelers aboard The S.S. Polyester Pantsuit. Granted when they start getting chewed up by the monsters there is a certain amount of satisfaction and more than a few laughs at the absolute wrongness of how the music cues, antomotronics, and cyclical structure of the attacks are handled. But none of this makes up for the fact that Joan never gets naked, never gets overly spiteful and most importantly, never gets naked. I know it’s a completely juvenile qualification but when you have the option to watch “Them” which is the ‘Crime and Punishment’ of giant ant movies why would you opt for this Jackie Collins styled knock off, even if it was ‘based’ on an H.G. Wells story. You wouldn’t, unless Joan got naked, or nearly naked. I’d settle for a bare-chested Pamela Shoop, who was actually on “ChiPs” with the guy who tries to rape her in this movie. Oh forget it, just go watch “The Bitch”.