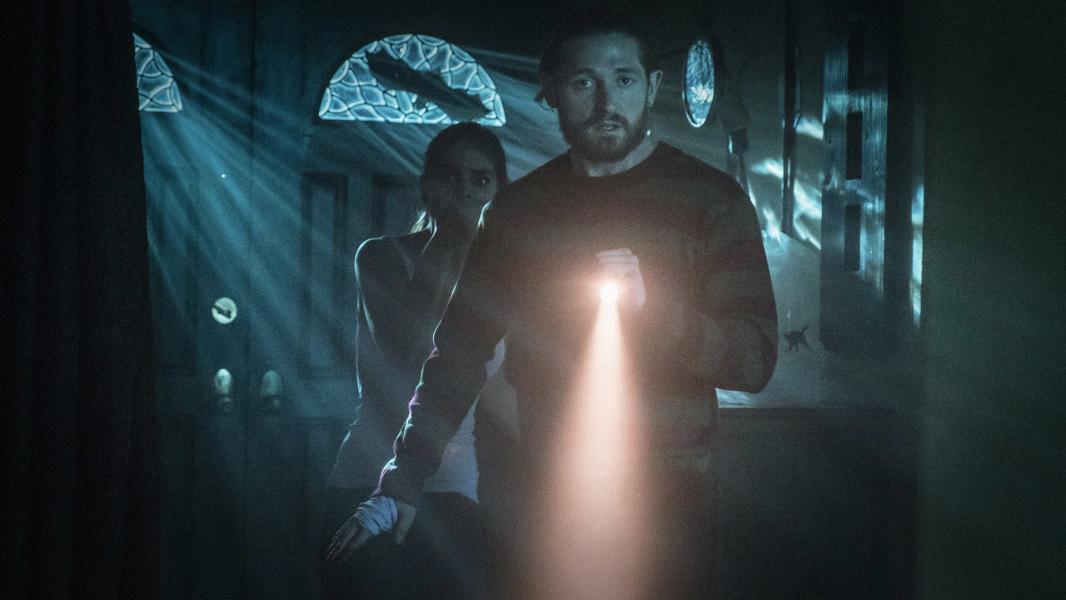 It’s a common desire of horror heads to want to find themselves in the middle of an actual horror movie—the tension, the frights, the validation of your knowledge of tropes and jump scares proving to be most important assets to your survival...Well, FEAR, INC. is your movie.

Joe Foster, played by Lucas Neff, is a horror aficionado who is experiencing ennui in his conventional life with live-in girlfriend, Lindsey (Caitlin Stasey). In an attempt to keep things exciting, the couple goes out for a date night and has a chance encounter with Tom (Patrick Renna) who hears Joe complain about the lack of scares at a particular haunt. Tom gives Joe a card for FEAR, INC. and vaguely tells him that if he wants to be scared shitless, this is the group to call. The couple returns home and a drunken Joe decides to call though the operator tells him all the tickets are sold out. Once their friends arrive for the weekend, the couples enjoy each other’s company until some rather unsettling and strange things start to occur. As the events become more bizarre and violent, Joe starts to realize that he and his friends are actually in FEAR, INC. Though he is reluctant to fully give into the events and attempted scares, Joe starts to question just how far this company will go.

FEAR, INC. is a super rad concept for a movie - to unwittingly hire someone to scare you and your friends to such an extent that you actually think you're in a horror movie is entertaining as it is terrifying. The film offers it's characters the chance to see just how well they would survive those situtations, and better than those other idiots on screen! The mere plot of FEAR, INC. is set up to fulfill that need to see a true horror fan finally outwit and call the crap on the typical tropes of the horror genre.

Writer Luke Barnett and director Vincent Masciale, have a solid movie on their hands but seem to be a bit shaky with the reigns of a full feature. With a few clever quips scattered throughout, the film is still rather over the top in it its efforts to recreate the cheekiness of meta classics like Scream or Cabin in the Woods. Indeed, FEAR, INC tends to find itself leaning on those expected tropes a bit too intensely.  Though the film itself doesn’t take itself too seriously, and is actually rather entertaining for the most part, the conversation between characters is often convoluted with a constant barrage of old and new horror references that feels as though Barnett is throwing things at the screen to see what sticks. As the plot unfolds, it's hard at times to go with the flow of the 'game' as we are constantly interrupted by some not so great dialogue to remind us of every single horror homage or ripoff that is happening. However, the laid back party feel of Neff and Stasey’s characters as well as their visiting friends, is well directed and established enough that you can find yourself enjoying the cheesiness of its clunky execution. It’s hard to teeter the fence between creeps and laughs, and while FEAR, INC. lacks in the actual creeps it does deliver some hearty laughs.