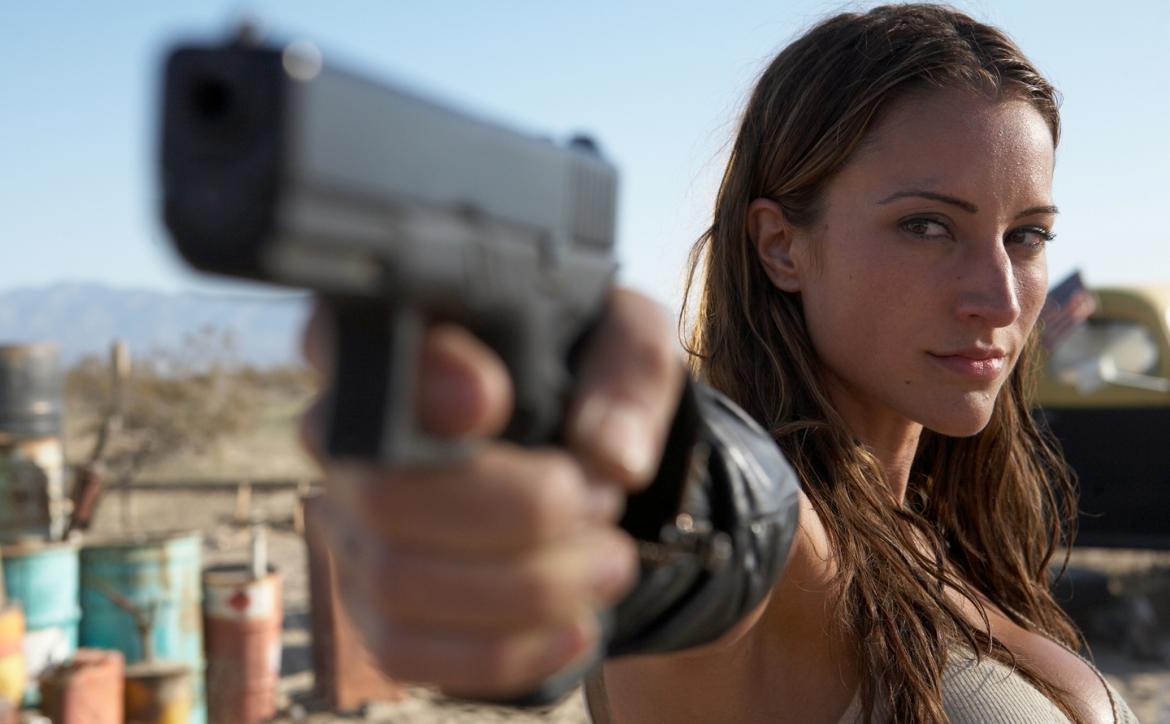 I love Russ Meyer. We can go into the reasons why, but regardless of what film scholars may like to employ as pretense for studying his work, we all know the real reasons to seek out Meyer’s films come in pairs. “Faster Pussycat, Kill! Kill!” is one of his better known titles and in some ways his least graphic movie. It is also the remake that most straight male directors would jump at first if offered the chance. What could be more fun than a few weeks spent with massive, sweaty…desert vistas; bouncing, bulging… tires on sultry Porsches and surging, prodding, erupting… pistols? Actually the film has been remade or eluded to several times under different titles. Those in recent memory include the softcore “Pervert” featuring California gubernatorial hardcore star Marey Carey, and the hardcore version “Faster Pussycat, Fuck! Fuck!” starring Larry Blueballs and Ron Jeremy. Anyway, as we all sat waiting for Tarantino to put together his remake with Brittney Spears, Kim Kardashian and Eva Mendes; Rick Jacobson and crew sneaked off to the desert to made “Bitch Slap”.

As “Bitch Slap” opens we meet three securely bustiered women who have dragged a skuzzy mob boss named Gage to the middle of the desert in search of treasure. Trixie is a stripper pawn for a game of pussy and rat devised by ex-cons Hel and Camero. Camero is a buxom Sapphic with flashy fighting chops and no conscience. Hel is a slow-playing redhead with all the right connections. The three have negotiated a convoluted set of circumstances to arrive at this very spot; a trailer in the Mojave under which a wealth of diamonds and guns are buried. But before they can dig up the loot and make tracks for sandy shores with singsong dialects they have to fight off a host of underworld thugs.

“Bitch Slap” is an homage to Russ Meyer to be sure but it also has heavy nods to“Kill Bill”, “The Usual Suspects”, and “Sin City” among others. The brightest star of the proceedings spends almost no time in front of the camera. Super stunter Zoe Bell (she of “Death Proof” fame) is responsible for all of the fight choreography. Her work, in combination with the slick, high frame rate shooting of Stuart Asbjornsen give the movie a good amount of visual flare. During its 110 minute runtime the film hits some substantial high points, and even manages a fairly satisfying conclusion.

Sadly, “Bitch Slap” is too heavily flawed, to be consistently watchable. It feels like a Maxim version of a Russ Meyer Movie with a script that Vivid Video fished out of Diablo Cody’s trashcan. The problems are stacked high and deep but they come to a head right in the middle of the movie. Titillation has a short shelf life on screen. Viewers tuning in for the female flesh aspect will want more to be revealed or at least a change in tease strategy in order to stay invested. What they’ll get in act two is a relatively steamy kiss followed by fully clothed, pantomimed cunniligus set to bad metal.

Over the course of the last 45 minutes, the film double dips all of its most effective elements. A furious fight finale proves to only be a penultimate fight leaving the audience to muddle through some 12 minutes of one-on-one fisticuffs with no Roddy Piper in sight. The movie would have been much better served with a single, brutal five minute sequence. Perhaps the biggest crime of these bloated action set-pieces is that just like the tease elements they seem to shift into another gear briefly then fall back upon familiar visual patterns to finish off.

I feel like I say over and again how much better a film might have been as a short or medium length feature. This time however, I have proof. If you really want an entertaining, sexy homage to go-go films with guns, fast cars, and fiery women, dig up “The Bikini Bandits” shorts online. The girls are hotter, the episodes tighter and the jokes more consistent.

To be fair I may not be fully aware of everything they were trying to do with “Bitch Slap”. I say this mostly because of the credit sequences. The opening credits are an ubercool montage of early sexpots and sexploitation works such as “Faster Pussycat’. The closing credits are a slightly bizarre collage of self shot webcam rump shakers. Are the producers holding up their film as an example of a better, bygone era of tease films; thumbing their noses at the vulgar obviousness of girls shaking their asses across the web? Or are they saying that their film is a bridge between the forms for viewers and content creators alike; a galvanizing lesson about the constancy of our appetites for the peepshow? The devil is everywhere? I don’t know, but I do know that it doesn’t really matter, because even the best of buried themes wouldn’t redeem the movie in its current form.