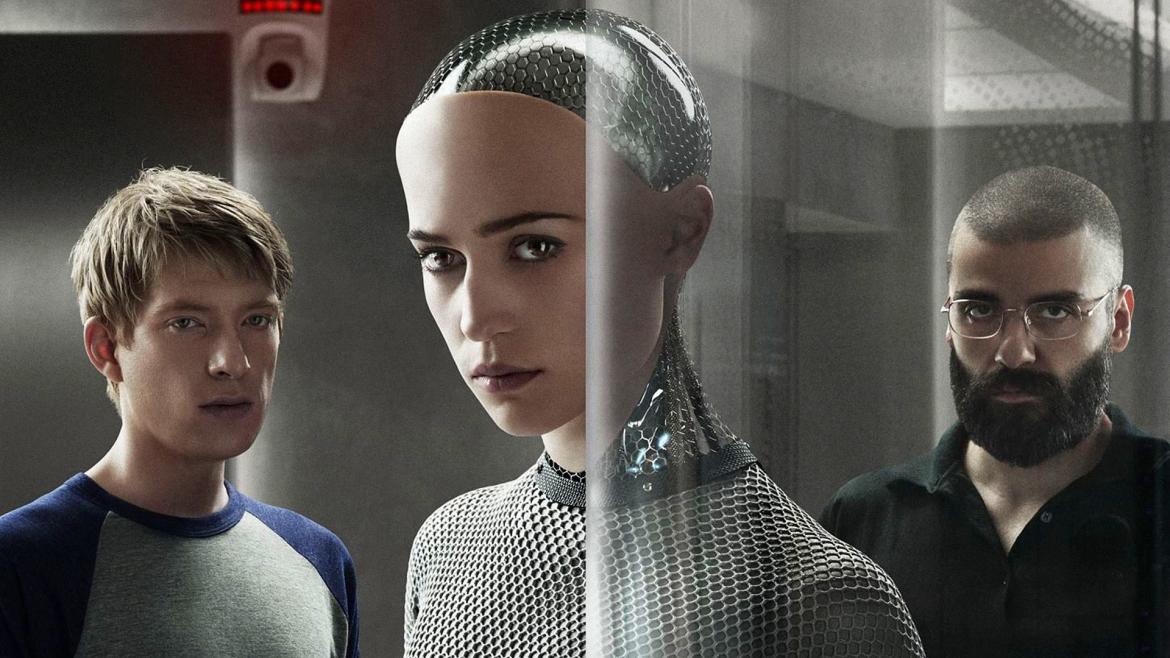 Caleb (Domhnall Gleeson), a programmer at one of the world's leading tech companies, is selected in a lottery to spend a week with the company's eccentric CEO, Nathan (Oscar Isaac), at his secluded compound. When he arrives he discovers that Nathan has created what may be the world's first actual artificial intelligence in Ava (Alicia Vikander) and he is tasked with testing whether she truly possesses consciousness. The question then becomes: how does she feel about being tested?

Ex Machina is a film that makes me proud to be a horror fan. Not that I feel that even just enjoying schlock is anything to not be proud of, but this is the latest in what I hope is a continuing trend of using the conventions of the genre to explore important subjects in ways that other genres and mediums seem to flounder at. Horror haters have been so obsessed with the blood and the boobs for so long that there's been a widespread failure to see what the genre is capable of saying. Films like Ex Machina, It Follows, Under the Skin, and a number of others from over the past few years indicate that more and more filmmakers are determined to demonstrate how wrong the naysayers are. A medium like comics struggles to find footing with addressing things like gender relations, and let's not even get into how this has been playing out within the video game industry. Filmmakers working in the horror genre, which has long been considered a cesspool of misogyny and depravity by outsiders, however, are confronting these topics head on and the majority of fans seem to be embracing the efforts.

As I was watching Ex Machina, it was the gender dynamics that stood out to me. The film has much say about technology, the realities of our data being out there in the ether, and the fears surrounding what the potential creation of true artificial intelligence could mean for us as a species. Alex Garland seems to be of the opinion that it's likely that our very humanity will make us completely ill equipped to deal with the reality of that huge step. There are plenty of people talking about that element of the film though. What I don't see being discussed very much is the way that Garland has tied those themes directly into the discussion of gender relations. We have Caleb and Nathan, two characters representing not just males, but males tied to technology, fumbling to cope with a female A.I. that has been given agency, but only to a controlled degree. It's impossible to discuss how this plays out without getting into spoilers, but it says some interesting things about something like gamergate.

Intellectual quality aside, I'd be remiss if I didn't also give the film credit for its perfect tonal tight rope walking. There are moments in the film that are truly hilarious. Isaac doesn't play Nathan as a caricature, but the audience is going to know this type of person and, in turn, fear the fact that this type of person is in the position he is. And that's the thing, even in the film's funnier moments, there is a sense of incapacitating dread. Gleeson and Vikander also do amazing work in their scenes together. We're never quite sure where Caleb's testing of Ava is going to take us, or even if Ava is truly the one being tested. Garland winds things tighter and tighter so that the audience is convinced that, at any second, something is going to snap.

It's a feeling that I know I can't shake about reality and the way that we as a society are addressing topics like the ones that Ex Machina are exploring, and Garland captures that feeling perfectly.