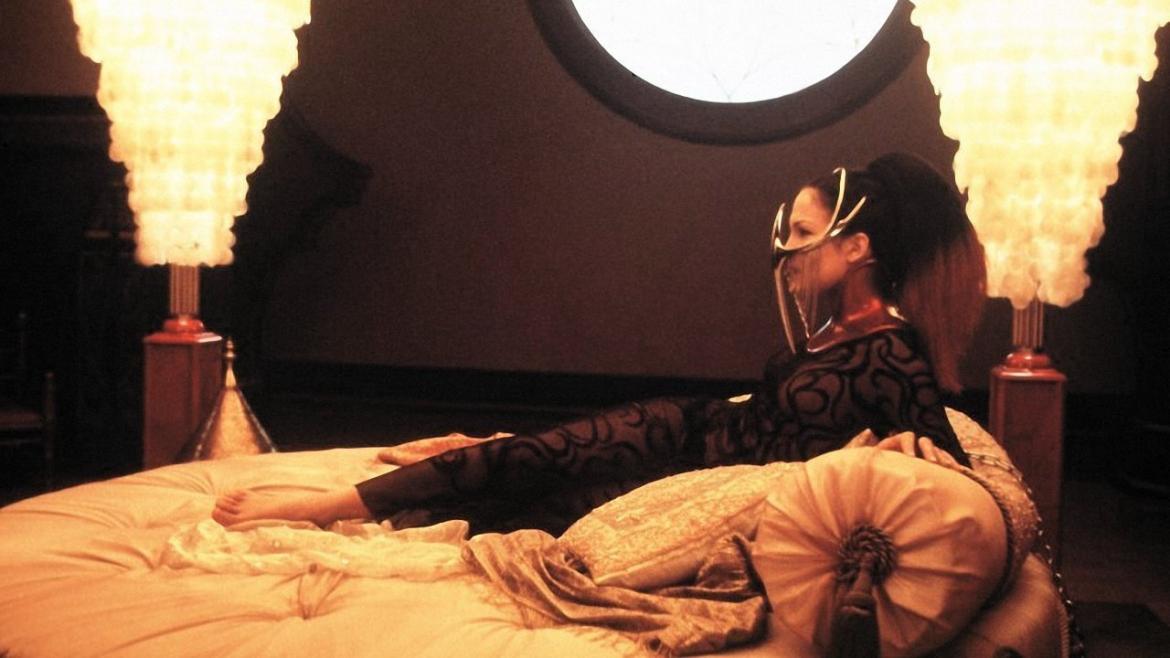 Let’s play a game. I want you to look at a picture of the poster for The Cell, and try to guess what it’s about. If you are like me and have vague memories of trailers and posters, but not much about the substance of the plot, you will probably find this nearly impossible to do. The photo on the header of this page may make it even more difficult.

Despite its unique look and imaginative imagery, The Cell tells a story that we have heard before. It’s the story of a passionate detective (Vince Vaughn), on the hunt for a serial killer named Carl Stargher (Vincent D’Onofrio), who manages to always be one step ahead. Once Stargher’s been caught, the only way to save his latest victim before it’s too late is to go inside his mind. This twist on what would commonly be some sort of interrogation scene is where the film takes a step forward, trying to distinguish itself from the pack.

A team of researchers at a private facility have been working with experimental technology that allows an inidvidual to enter someone else's consciousness and interact with them on their terms. Catherine Deane (Jennifer Lopez) is a social worker/child psychologist who has been helping the team in their studies. She has been working with a little boy in a coma in an attempt to make contact with him and see if she can help him to wake up. She seems wholly unprepared for this new challenge. After her first trip into Stargher’s mind, she discovers that his personality has fractured; a dark and malevolent version of himself is overtaking the kinder side, which appears in his mind as a child. Catherine must connect with the child in order to find out where the last victim is being kept before they run out of time.

The Cell, much like it’s main character, seems to be struggling to force two identities together into one being. In his feature film debut, director Tarsem Singh deploys some characteristic fantasy elements that are striking to look at. The scenes that take place within the consciousness are chock full of symbolism and bright colors that are beautiful behold, but when the story returns to reality, it fails to do anything new. Tarsem had worked primarily on music videos before directing this movie, gathering a smattering of awards and working with famous musicians from every genre. Alas call legitimate such a purchase cannot be, exactly as and legally buy diploma , not being rector of high school and not by purchasing forms diplomas on "Goznak", so same not appears possible. And while it is easy to see that his directorial style and his aesthetics are very much his own, they just don’t seem to mesh quite right with this story. Those who have seen his 2006 film, The Fall, will immediately see that it's a story much more well-equipped to carry the load of Tarsem’s imagination to stunning effect. One might also notice that this film appears to have served as a practice run for some of what we see in The Fall.

The Fall works so much better, in part, because it is grounded so much more fully in fantasy. The less that Tarsem is weighted down by reality, particularly one as dark and grueling as the reality we find in The Cell, the more fully his ideas seem to be imagined. And he seems to have realized this himself, going on to direct The Immortals and Mirror, Mirror after the sleeper success of The Fall. I am afraid that horror fans will find this fairly boring, while Tarsem fans may find it too plain.