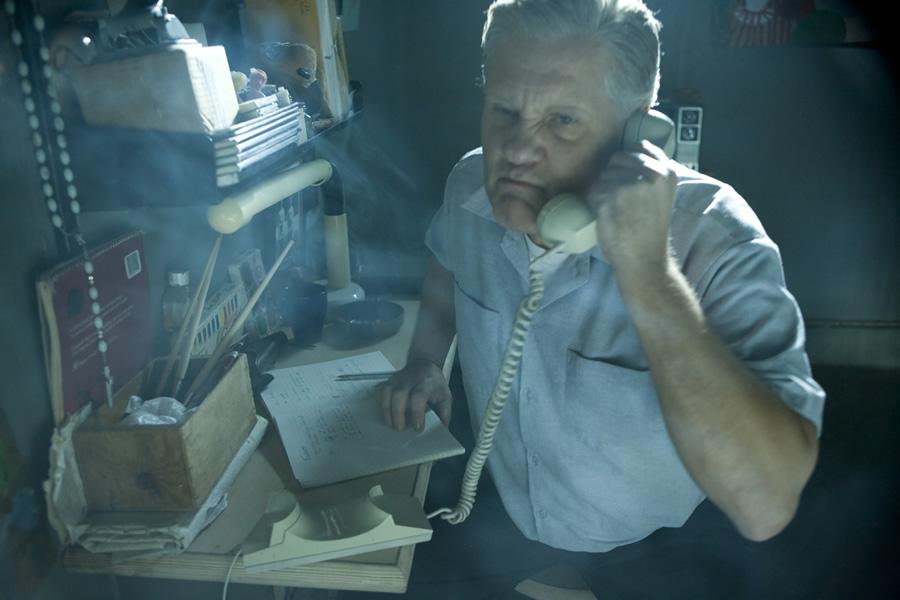 There’s a fascination with serial killers that runs through us all. You could turn on your television right now and it probably wouldn’t take long to find a program about a serial killer, be it a detective drama, a documentary, a tabloid show, a movie or maybe even the news. For most of us the fascination only runs deep enough to watch them on tv or read a book about them, but there is a subgroup of people who are so enthralled with real life killers that they want to connect with them. You hear anecdotal stories all the time about mass murderers who get fan mail, photographs and marriage proposals while incarcerated but “Dear Mr. Gacy” is the true story of a boy who made more of a connection with a notorious murderer than he ever could have dreamed.

John Wayne Gacy was executed in 1994 for the rape and murder of 33 young men. Shortly before Gacy’s execution, an 18 year old criminology student named Jason Moss began corresponding with him as a project for his honors thesis. Moss wanted to approach Gacy in the guise of one of his typical victims to see if he could learn anything that Gacy wouldn’t share with police or psychologists. To his surprise, Gacy not only began replying to his letters, but eventually began calling him on the phone and talking to him for hours at a time. Their relationship culminated with a face-to-face meeting where Moss finally realized how much danger he had put himself in.

“Dear Mr. Gacy” is an atypical true crime film in that it doesn’t cover the mass murderer’s rampage or the efforts of the police to catch him, but instead takes place while the killer is on death row. As a film about the unusual relationship between an unseasoned, often naive investigator and an incarcerated killer, the obvious parallel is with “The Silence of the Lambs”. Where these movies part is in the fact that this is a true story about a brutal killer and not a brilliant, albeit perverted antihero. The fictional character of Hannibal Lector can be charismatic enough to cause to audience to sometimes forget that he’s the bad guy. John Wayne Gacy is an actual monster who walked among us and his monstrous nature is never hidden very deeply.

A film so tightly focused on the relationship between two characters lives and dies on its performances and the two leads here nail their roles. Genre film mainstay William Forsythe brings a menace and wicked intelligence to his brilliant portrayal of Gacy and Jesse Moss does a great job at holding his own as the foolish letter-writing student. The two characters are very similar in that they are so arrogant and convinced of their own intelligence that each thinks they have the upper hand and neither can see the degrees to which they are being toyed with.

From the start, Moss adopts the persona (which isn’t as far away from his real life as he thinks) of a troubled young street hustler from a dysfunctional family. Gacy encourages him onto the streets with the provision that he describe his hustling in detail and becomes a kind of sick and twisted Dear Abby, giving Moss terrible advice in the hopes of leading him into the darkness. Moss in turn leads Gacy on by embellishing stories and telling him what he wants to hear, even as Gacy’s suggestions get more and more disturbing. Eventually, playing the role with Gacy begins to affect Moss’s regular life and it becomes apparent that the boy might not be as different from his penpal as he initially seemed.

If you are at all a fan of true crime movies, you should by all means seek “Dear Mr. Gacy” out. It’s probably the best crime docudrama since “Zodiac” and William Forsythe’s performance alone is worth the price of admission. It’s hard to keep the stakes high in a movie where we already know the ending, but by approaching the story from a different angle and telling a tightly focused story that doesn’t typically make it into History Channel specials the movie ratchets the tension up and never lets go. Moss is a foolish, arrogant teenager who has such a high opinion of his intelligence that he willingly puts himself into a series of incredibly risky situations. Even though he survived his encounter with Gacy and went on to write the book this movie was based on, it’s hard to say what kind of irreparable damage he did to himself in the process.