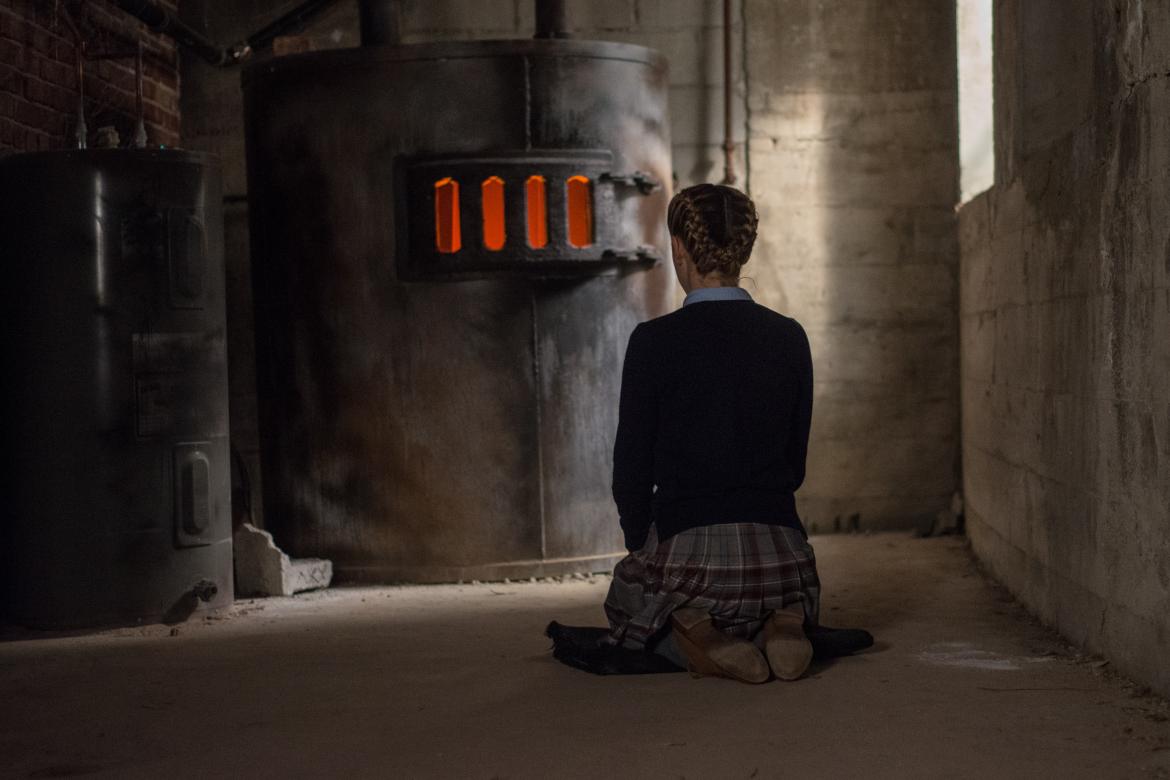 Did you hate It Follows? Bored by The Witch? Then The Blackcoat's Daughter (originally titled February and hitting VOD/select theaters March 31st) is not the film for you. Oz Perkins' directorial debut is not some unholy combination of those two aforementioned indie films, but it follows suit with the trend of moody horror flicks that turned heads on the festival circuit. Similarly it may drive audiences to claw at its metaphorical throat.

Lonliness, sadness, loss, and isolation. All of these have a hand in the slow corruption of Kat (Kiernan Shipka), one of the girls left to their devices at an all girl's boarding school after everyone else has gone home for the week. Not to far away is, Joan (Emma Roberts), who has seemingly just escaped from some type of facility and hitches a ride toward the school. With each story on a collision course and evil afoot don't hold your breathe for a happy ending.

In poker terms Perkins' (son of the legendary Anthony Perkins) tips his hand right about the halfway point and let's just say he's not quite holding pocket aces--but he sure isn't bluffing either and is dependent on how the cards fall for those that calll him on his game. The Blackcoat's Daughter is a tough sell to be sure- on one hand you've got Shipka's subdued and depressing demeanor often carrying the film outright with her cracked out dead-eyed stare--a wonderful performance in spite of those negative connotations. On the other, you've got Perkins' extremely lean screenplay that is heavy on mood and reliant on his young leads--all of which bring great stuff to the table. Togehter these aspects might have to roll around in your dome for a while with multiple viewings to absorb the maximum impact and for those that allow it to cast its satanic spell will be rewarded.

Perkins' debut (which is finally seeing the light of day AFTER his sophmore film, I Am the Pretty Thing That Lives in the House) lingers much differently than fellow first timer Robert Eggers' feature, The Witch--though they are strikingly similar when it comes to the structure of their moody tones. Similarly, the minimalist score hums along as a fitting companion to the subtle sometimes imperceptible whispers of an evil force at play throughout. It is the setting though that provides The Blackcoat's Daughter with suitable notions of desolation. The snowy landscapes and small town emptiness are a perfect capsule to contain a film such as this and allows Perkins to surgically inflict an icy chill down your spine.

With the script being as lean as it is, the audience is often left to their own devices to suss out what exactly is going down. This is what'll test the patience of some while others can appreciate reading the characters to pick up on their subtle mannerisms within the performances. It's also where multiple viewings work their magic--even with as slow and brooding as it is. There are nuances that can be picked out that might not have been evident the first or second time around and knowing what to expect allows the viewer to focus on a broader sense of what Perkins is trying to do.

In the end it's up to you to decide if The Blackcoat's Daughter strikes you as rage inducing, overly indulgent mumbo jumbo or a powerful tone poem about loneliness and loss. It's cold shoulder technique allows for either of those readings to occur and what some might perceieve as a hollow exploration of the devil's influence on a vulnerable and lonely girl other's might praise for its layered and delicate touch on the possession subgenre--after some soul searching, this reviewer settled on the latter.