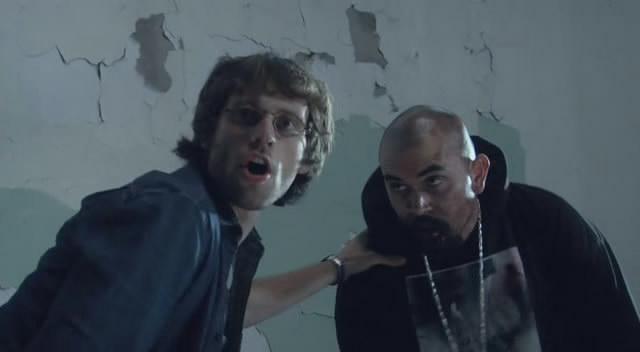 In today's age when zombies are more embedded in pop culture than perhaps ever, it is only natural that filmmakers are now trying to change up the formula a bit. It's an admirable venture, but often hard to execute. In "Evilution", this change-up comes from alien intelligence being the vector that brings the dead to life. The upshot is that with this alien background comes new ways to try and kill the undead. All of it comes full circle in this shoddy take of what is surprisingly not a Syfy Original feature.

Darren Hall lived through a tour of Iraq, and he's got the baggage to prove it. Darren's case, however, is a bit more difficult than just post traumatic stress disorder or anything of that sort. As a medic, Darren was on location when the Army uncovered a mysterious alien bacteria in the desert of Iraq that brought the dead to life. As his base fell to this otherworldly intelligence, Darren fled back to the states with a vial of alien juice in hand. Holing away in a ghetto apartment in a mysterious building, he soon puts the alien serum to further tests as he tries to help his fellow gang-banging residents regain their health after random gang violence.

Despite the ideas surrounding alien intelligence and the like, "Evilution" is nothing more than your standard zombie romp with a different coat of paint. Sure, they've thrown in some extras, but when you dig down to the roots, it's still a zombie movie. When looking at the movie in this light, it isn't all that bad. The filmmakers hit the right notes -- there's a bit of badly created gore -- but there are zombies biting people and it works. Sadly, the dialog and characters that are piled on top of this genre standard are so off putting that it manages to kill any momentum it may have built early on in the movie. The highlight of the characters are two resident gang-banger 'wannabes' played by Guillermo Diaz and James Duval, both of which you have seen many times in bit roles in various movies. They are both funny throughout the film, and will give you a few chuckles with their over the top gangster schtick. The problem with this scenario is that neither character are leads. They are there only as extras and to some extent, comic relief. Beyond this, we have our resident army medic turned mad scientist who plays flat through the entire film, as well as "Maddie", the apartment building's resident sweetheart and large breasted eye candy. While Maddie filled the eye candy portion of her role just fine, the character itself was so absurd that it was often distracting. Showing up at random times in various states of fancy dress, high healed boots, delivering out-of-place, flirtatious jokes, the majority of the time this character is on screen is spent figuring out just what she is doing. That and throwing around cleavage at every opportunity.

For plot, the overall layout of the film was passable, though it did little to truly excite. There is little going on here for character development, so there is no connection to anybody that gets involved. Even our alien intelligence lack in excitement as they look like everyday humans with a Kayro syrup problem. There is unintentional comedy, however, in the curve ball they threw in to kill off the outer space menace. Here, a simple bullet to the head will work, but since we are dealing with aliens, we have to have something a little more science-y to go along with it. So, our writers decide that the other effective tool against the enemy is a combination of chlorine and ammonia! The resultant gas will be sure to wipe out any zombie that comes in contact with it. Let's just forget the fact that this well known toxic gas will kill off any humans too, and that it was a widely used weapon agent in both World War I and World War II. Essentially, there is absolutely nothing special about this new way to kill off zombies except for the fact that it does... kill off zombies.

There are worse direct-to-video zombie movies out there than "Evilution", but there are also a ton of movies in general that far surpass this film. Filled with aesthetics that scream TV feature, especially of the "Syfy" variety, there is just nothing here to get excited about. Except for Maddie and her various low-cut and incongruous fancy dresses and night gowns that she happens to clean the house in.

The funniest thing of all? That nifty military action oriented DVD cover up above? That's about the first two minutes of film. It never comes up again.