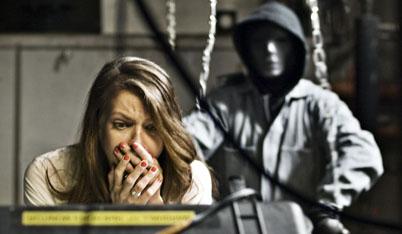 "Killer Movie" seems like an odd fit for 2009. Reality television elements aside, this film seems like it would have been more at home in the late 1990's than in 2009. On the surface it's an attempt to lampoon Hollywood type characters, small town politics, reality television and the slasher movie conventions. Underneath the surface, it's a boring movie that tries awfully hard, considering the fact that it doesn't seem to have anything to say.

The film centers on a young reality television director, desperate for a job, who takes a gig directing a reality show in a small town in North Dakota. The show is supposed to be about the local high school hockey team, and their miracle season that is leading them to the playoffs for the first time in decades. Once the director - Jake - gets out there, he learns that there's something more sinister afoot.

It turns out that the former hockey coach, in prison for years for the murder of his wife, has been let loose back into society. Along with his release, several high profile "accidents" have happened, and that's led many of the town's residents to begin to suspect that something fishy is going on. That's the real story that Jake has been sent out to capture, so him and his crew set out interviewing town locals to try and get some answers. As you probably already know, locals usually don't take too kindly to Hollywood types asking questions, so things continue to get ugly from there. For the majority of the film, the crew goes around and does their best Scooby Doo impression, the locals give them the old stink-eye, and we're treated to the occasional stalk/slash sequence.

There's about 25 unruly subplots in this film, but the most important one involves Kaley Cuoco, star of TV's "Big Bang Theory", who plays spoiled mega-star "Blanca Champion". That's not a joke folks, clearly someone involved in this production is a huge Street Fighter fan. Blanca's doing some "method acting" for an upcoming role as a reality TV director, so her agent has sent her out to East Bumble along with the crew so that she can learn by watching Jake, who it's revealed has had some type of relationship with Blanca in the past. This makes total sense, since clearly there weren't any reality TV sets in Hollywood they could have sent her to.

There's a whole gaggle of supporting characters who fill out the cast here, including the bitchy producer, her sexy assistant and lesbian love interest (?!), the creepy sound guy (Jason London), stoner PA, and finally, Jake's love interest in Keir the Assistant director. Cuocco is probably the standout of the entire cast, as she was clearly cut out to play these bitchy characters. Her performance (not to mention appearance) brings up shades of what one would picture Britney Spears as being like in her real life.

My second favorite in the cast is former "Party of Five" star Jeremy London, who despite being pretty funny in his role definitely needs to fire his stylist, because he's looking more and more like a child molester with each passing day. In the end nearly every character is pretty incidental to the overall plot of the film (not sure how you accomplish that, but they did), except to make for slasher fodder. I only make it a point to bring them all up here because they're a prime example of this film's biggest problem: confusion.

You see, "Killer Movie" is trying really hard to say something interesting. The film's real life director Jeff Fisher, himself a long time reality television director, states in the extra features that he was trying to take that real life experience and relay some of his stories to the screen. This leads to a few amusing exchanges between characters, but for the most part it consists of awkward in-jokes that those who have never been on a television set will probably not care about.

The other half of the "satire" here, the slasher half, is equally vacant. Our killer wears a hoodie with a kabuki mask covered in a stocking. If they were intentionally trying to make him as generic as possible, they definitely succeeded. Most of the deaths are off-screen, although it's hard to say whether that was due to budgetary constraints or a conscious decision. I do recall one arm being chopped off on-screen and a decent hanging, two scenes that are probably the highlights here. The horror is so light and so tacked on though, that you have to wonder if Fisher wouldn't have been able to make his point better by cutting it out completely.

The idea of satirizing reality TV and slasher films together has been done to death (see "Halloween: Ressurrection"), but I don't necessarily believe that there's not something interesting left to say about it. Fisher himself makes a great point in the extra features about the scripted nature of current day "reality" television. It's obvious that that's what he had in mind while making "Killer Movie". Unfortunately, none of that made it to the screen.

What did make it is an overbearing, labyrinthine script that has so many characters and subplots that you need a flow chart to figure it all out. That might be excusable, if it weren't for the fact that the twist at the end pretty much negates everything you've been trying to figure out for the last hour and a half. In lieu of making profound statements on reality and genre, this is the type of film that could have easily gotten a pass if all the horror and comedic elements were on point. As already stated, they weren't, and ultimately it commits the biggest sin any film can; being remarkably dull.