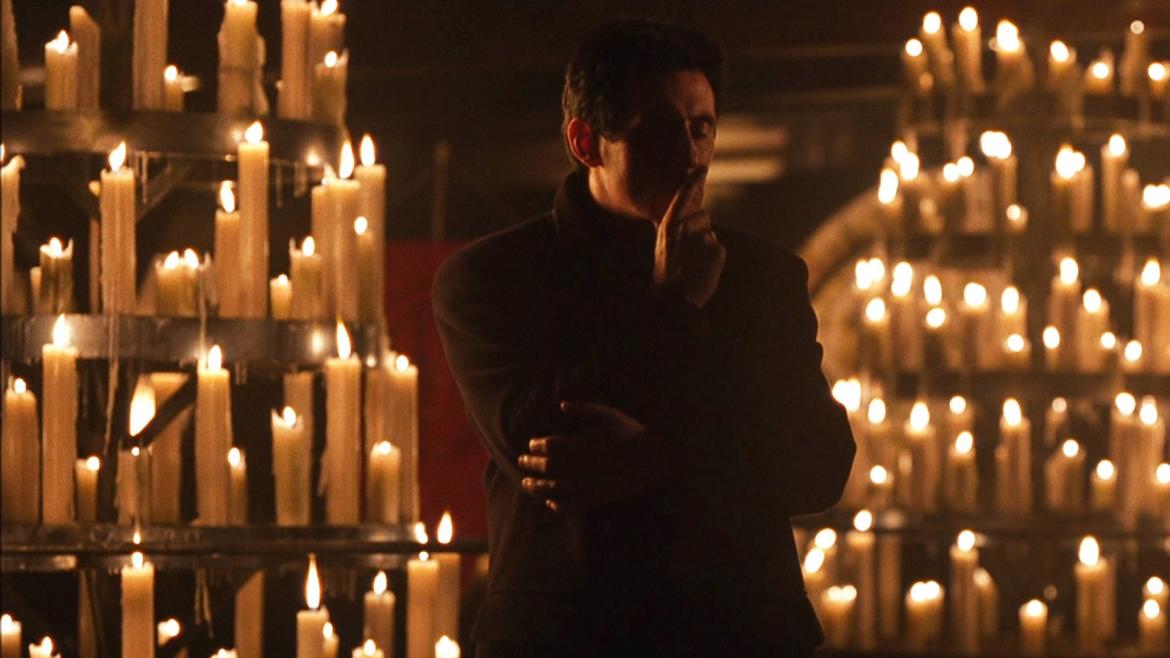 A drunk suicidal Schwarzenegger, a breakfast shake with cold floor-pizza, sleazy Gabriel Byrne, a creepy subway hobo, doomsday cults, and Robin Tunney's boobs- End of Days has it all. Peter Hyams did learn one thing between 1997's The Relic and his doomsday horror actioner and that's how to light scenes so that people can see what's going on. Of course it's up for debate as to whether or not that's a good thing.

The end of the century has come and all of New York is bracing for the party of the century- everyone except Jericho Cane (the single most blatant action star name maybe ever and played by Arnie himself). Jericho, an ex-cop now leader of an elite security team, uncovers that doomsday is upon us and Satan (Gabriel Byrne) has come to Earth in search of the ultimate baby mama. It's now up to Jericho to pull of the most epic c#%kblock the world has ever seen.

Ahh the late 90's, when you could spew out a harmless yet dour action horror movie with a sex scene set to Limp Bizkit and be rewarded with an 11% Rotten Tomatoes score. Now, anyone would be hard pressed to go to bat for this film and defend it with honor- or a straight face- but sometimes you just gotta shrug your shoulders put on a smug smirk and say, "C'mon guys...it's not THAT bad."

With that out of the way...it's not that good either. Hyams as a director is never quite sure if he wants his film to be a straightforward contemplative horror/thriller or gritty action flick. We skip around from action set-piece to solemn scenes of Schwarzenegger grieving for his murdered family. The bipolar direction still finds room for one-liners and comic relief in the form of Kevin Pollack, but due to the tone even the jokes come off as depressing. Byrne seems to have a grasp on the tone of the film, but because he's playing Satan he's given the freedom to be a wisecracking sleaze-ball who also can shoot daggers at characters and rattle off over-written villainous dialogue.

End of Days is inherently silly, but Hyams plays things incredibly serious- something this reviewer happens to find somewhat endearing. Casting the bulky Austrian in the lead role comes with a price tag- and thats range in acting. Schwarzenegger carries himself well, but with all the gun battles, subway crashes, and devil fights there's not much room for character development. Byrne's theatrical presence quickly becomes the backbone of the film. It's sometimes a joy to watch him chew up scenes and turn on a dime to deliver faux-poetic biblical discourse.

Grim, overlong, dumb, and a little too "by the books"- End of Days has plenty of problems, but it's still a film you can enjoy in spite of its sins. Let's face it, when your New Year's Eve satanic cult ritual occurs with Guns N' Roses blasting in the background there's certain truths you have to face and none of them involve sound decision making. A truth that comes with notching End of Days in the guilty pleasure column.