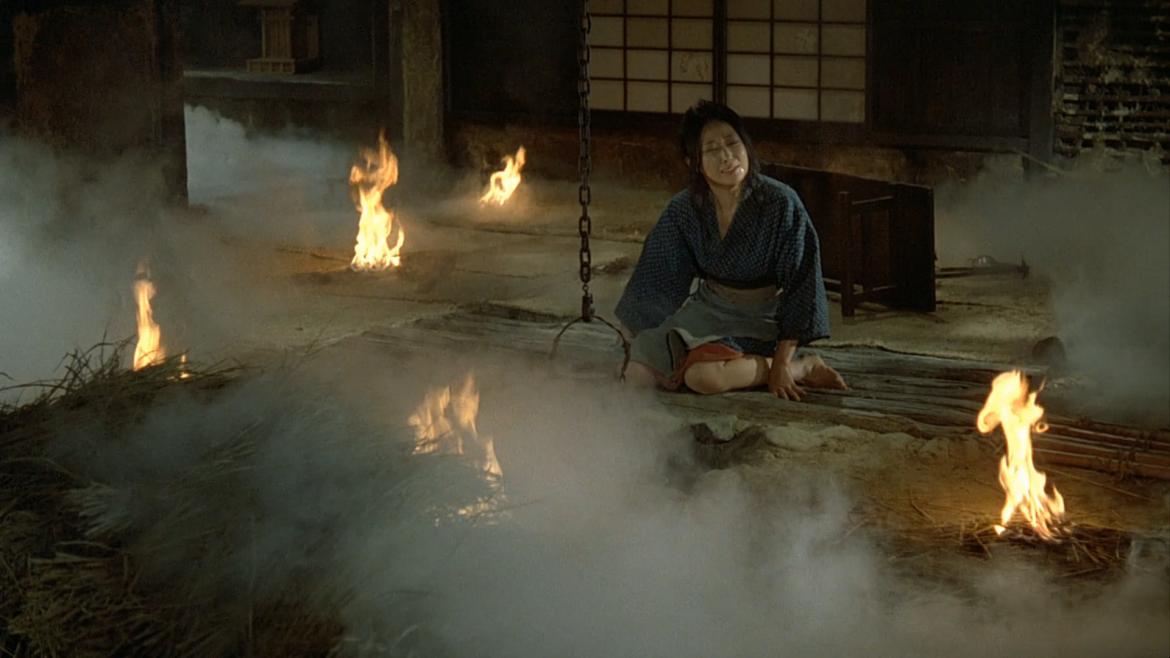 “Empire of Passion” is a Japanese film about a young man who becomes infatuated with an older married woman, who then eventually rapes her and convinces her to help him murder her husband so that they can be together. They strangle the husband and toss his body into an old well. Eventually the ghost of the dead husband comes back to haunt them and their lives begin to unravel.

The Ghost elements of this movie are pretty standard, although there are a lot of genuinely unsettling moments and images. Much of the film's strongest imagery surrounds the large abandoned well that the husband’s body is tossed into. The young man often comes back to toss dead leaves into the well every fall after the murder. Later on in the film, when the man and the woman are in the well trying to find the body, the ghost appears at the top of the well dropping leaves and grass on top of them, which is by far the film’s creepiest and most well-crafted moment.

I found “Empire of Passion” to be a fairly bizarre ghost/exploitation film, that is probably more appealing for how strange it is rather than the actual quality of the film. To start off describing why this film is so weird, the young man basically tricks the woman into killing her husband by asking her to shave her vagina. At one point while having sex he begins to perform cunnilingus on her and then stops to angrily demand: “Shave it! Shave it! Shave it! Shave it!” The next scene is him shaving her naughty-bits with a straight razor while she moans and cries. Later after sex he tells her that her husband will realize she doesn’t have any hair downstairs and then he’ll know that she’s cheating on him.

On top of that, there is the fact that this movie is supposed to be some sort of strange morality lesson where the young man and the wife are punished from beyond the grave for their murder and adultery. Even though it is clear in the movie that the woman is fully complicit in her husband’s murder I think you could still argue, from a more modern perspective, that the filmmaker is essentially blaming the victim since she is first raped and then manipulated by her rapist for the rest of the movie.

Japanese films, especially the exploitation films of the late 60's and 70's often seem to have this bizarre attitude toward rape. Women in these films are often raped, and at some point during the act, stop protesting and start to enjoy it. I imagine this is in some part intended to provide the audience with some sort of creepy rape fantasy. While I certainly wouldn't advocate anyone indulging that sort of fantasy, I think it’s important to note that this sort of thing was part of Japanese culture and it’s something you run into a lot if you watch older Japanese horror/exploitation movies.

Whenever Criterion puts out a horror movie I think it is something that at least deserves to be watched, especially considering the quality of the horror movies they typically select such as, “Hausu,” “Onibaba,” and “The Devil’s Backbone” etc. “Empire of Passion” isn't really on the same level as many of their other films, and if you’re new to Japanese horror or exploitation films this certainly isn't the one to start out with. However, if you’re already a fan of Criterion’s horror movies, or if “Ero guro” sounds like something you’d find interesting, this might be a good "next step" in your journey into classic Japanese horror.