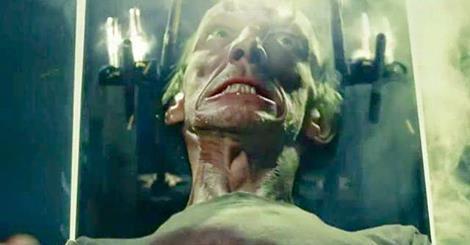 William Cassidy (Julian Richings, The Colony) is a reclusive conspiracy theorist who has been plagued by extraterrestrial contact for the past 40 years of his life. During one of the moments extraterrestrials have control of his body, Cassidy contacts a fellow blogger and amateur filmmaker Joe (Adam Seybold, Exit Humanity) to come visit his home during the interstellar event called the ejecta. Discussing Cassidy’s experiences with the otherworldly, the two men witness a spaceship crash and race into the woods to recover the alien.

While chasing it through the woods and back into Cassidy’s home, Cassidy is taken hostage by a scientific group who wants to use his strange circumstances to reestablish contact with the aliens. The more Cassidy refuses, the more intense the torture becomes from both sides – human and alien – putting everyone at risk.

Centering a story around a paranoid survivor of alien visitations instead of relying on the crutch of a “harbinger of terror” trope makes Ejecta immediately engaging, and it’s supported by strong, smart delivery. Writer Tony Burgess (Pontypool), who has a flair for the disturbing, expertly juxtaposes the Cassidy’s alien control and impending danger to humanity against humanity’s own perverse and malicious existence. Directors Chad Archibald and Matt Wiele, cleanly execute switches between Cassidy’s captivity by the scientific organization in the present and found-footage flashbacks. Flashing back to earlier that same evening when he was with Joe and the aliens, we see a finely developed, harrowing timeline in which the anticipation of Cassidy’s survival is paramount.

Though the film teases aliens as the dangerous beings, Ejecta delves into the deep recesses of the human psychology of knowledge, power – and ultimately, control – using its own fresh perspective to reinforce the well-trod horror inversion that the real monster is humanity.