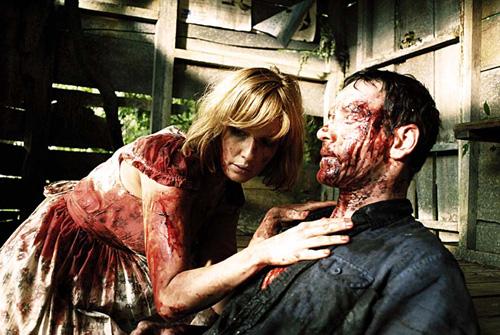 Just from some of the films I've seen lately, it seems that "hoodies", or groups of young adolescents from the suburbs, are a major problem in Britain. In many recent British films, such as “Hot Fuzz” and now “Eden Lake”, these adolescents are portrayed as a technologically savvy bunch with baggy clothing and thick slang-filled accents.

There is even a derogatory term for these kids, individually they are called a "Chav". Wikipedia gives the female rapper, Lady Sovereign as an example, and one particular article I read stated that Chavs are “lazy, unemployable, and contributing to the high crime rate”. “Eden Lake” contributes with this stereotype by depicting these suburban kids as a modern day version of “Lord of the Flies”, except there are the added layers of class distinction and ageism as their terrorizing focuses on a couple from the city, Jenny and Steve.

Jenny, a primary school teacher, and her boyfriend Steve venture into the country on holiday, planning to stay at a quarry before construction begins and houses are built around the lake. The first night they stay in a nearby bed and breakfast that looks similar to the pub and breakfast from “The Wicker Man.” The trip seems to be going well as they set up their tent the next day and spend their afternoon sunbathing, until a pack of teens take up residence a few feet away from their camp ground.

The teens proceed to play loud music and not control their dog, who several times startles the deer-faced Jenny. Things escalate when Steve goes over to ask the teens to stop their rabblerousing. The teens proceed berate him - the teen girl in particular leading the verbal assault - and ignore him, turning their music up higher. Eventually they leave, one of them flashing his penis at Jenny in passing.

The couple continue their romantic weekend by having lunch in town, but the tormenting escalates during the night just as Steve is about to propose to Jenny, using one of the most goober worthy lines in the film. Events occur and Steve and Jenny are put on the run with the teenagers in close pursuit. While I feel that the scenery could have been utilized to create a creepier atmosphere, the pack of teenagers are pure vileness, if only for their use of improper grammar and camera phones.

Their ring leader Brett, played by Jack O'Connell, plays a spoiled teen well, but almost too well and may get typecast as hoodlum #1 for the rest of his acting career. Also, Kelly Reilly, who plays Jenny, carries this film. Sometimes bordering on annoying she resembles a wounded animal for most of the duration, but she is impossible to not watch with a close eye as she out maneuvers her attackers, almost gazelle-like. My only problem with her character comes towards the end, as she seems to ratchet up into Xena-warrior-princess-under-bite-snarling, in a matter of minutes. Her boyfriend Steve, played by Michael Fassbender is at times overly sentimental and blinded by his stereotypical English chivalry, which makes him extremely unlikeable.

Perhaps it is the fact that Jenny runs around most of the movie covered in filth or one particular scene involving a shard of glass, but “Eden Lake” did remind me of “The Descent,” which only pleases me more in finding out that writer/director James Watkins is directing “The Descent: Part 2.” While I prefer Marshall's storytelling style, I believe that Watkins will stay true to the original “Descent” and make a supreme follow-up.

By comparison, Europe seems to have thorougly Plutoed America when it comes to horror. While the ratio of releases may lean in favor of the United States, Britain seems to be battling with France in quality. “Eden Lake” is definitely no dud, despite a few plot flaws, and while it feels like you have seen this film before, it still holds your attention all the way through by melding together characteristics of recent horror films, in particular, “The Descent”, “The Strangers”, and “Ils”. It also maintains an uneasy grittiness, like the American films from the 70's, letting audiences know that these characters are definitely at risk.

“Eden Lake” is a great form of birth control, taking place in contemporary Britain where the possibilities of similar events happening don't seem to be far off by newspaper's standards. The uneasy feeling of wanting to see a group of noxious, tech-savvy teenagers who always seem to be one step ahead of their prey, get beat to death with tree limbs or some other nearby object, should make any audience member feel unsettled. Overall, “Eden Lake” keeps the pace up and the action high. It's your typical survival horror film where the antagonists are always close behind, but the ending gives this film a thoughtfully unpredictable punctuation.