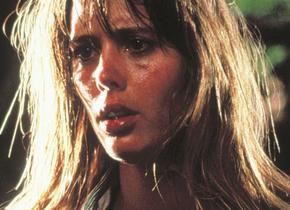 If you could emulate the career of any director in film history who would it be? Copolla, Carpenter, Kurosawa? Would you skew more modern and choose from names like Roth, Boyle, or Ang Lee? Or would you bury the artistic pretensions and go after the career that would be the most fun? Jess Franco, Joe D’amato, and Fred Olen Ray come to mind as guys who spent a lot of time shooting low-grade nudie sleaze during the heyday of soft-core. They seem like guys who should have had a good time on almost every set they commanded. At least that is my perspective as a card carrying male degenerate, who welcomes a little voyeuristic charge now and again.

Perhaps mimicking the career of any member of that sleazy trio is a less appealing option if you’re a woman, or perhaps not. The director credited with 1990’s “Blood Games” is one Tanya Rosenberg. It is her one and only credit, directorial or otherwise. So, is Rosenberg an intrepid distaff lover of all things Olen Ray, out to make her mark in the boobtastic world of shot for VHS trash? Tanya Rosenberg, female beacon, showing us that it wasn’t only skuzzy, mouth-breathers with perma-chubs who enjoyed crafting a jiggly 80’s skinflick. Unlikely, what we probably have here is a David DeCoteau (dir. of “Sorrority Babes in the Slimeball Bowl-a-Rama”) as Ellen Cabot moment; when a male sexploitation director slips into a flimsy feminine pseudonym to deflect charges of sexism and smut peddling. My feeling on this is that if you are gonna emulate the man who brought the world “Hollywood Chainsaw Hookers” you put your nuts on the table and let the hammers fall where the may.

“Blood Games” follows a gravel gargling, leather-skinned baseball manager named Midnight. He is the proud skipper of Babe and the Ballgirls, an all-female baseball team that travels America’s byways taking on all-male baseball teams; think Silver Bullets in virtually assless jogging shorts and super cinched t-shirts. Midnight is also father to two of the young women on the team, Babe (who looks like a saucier version of Pam Dawber) and her little sister Donna (who is neither saucy nor Dawber-esque).

The film’s opening finds this team of “Aerobicise” stand-ins standing in the high grass of the Sierra Nevada foothills clowning a team of drunken Shaver Lake hayseeds. The game is contentious and the drunks don’t cotton to having a team of women beating them around the base paths. The humiliation concludes and Midnight goes to collect his winnings from the local potentate Mino played by Ken Carpenter (who may not be related to John Carpenter but looks for all the world like he is). Mino promises Midnight his money later in the day, but he has no real intention of paying. Meanwhile Mino’s son Roy (a dead-Ringer for Queensryche’s Geoff Tate) who was almost literally emasculated by Babe and the Ballgirls during the game, decides to soak his sore gazats in beer down at the local Klan bar. Later that evening, everything takes a turn for the violent when Midnight, incensed at being stiffed on the bet, goes to try and collect from Mino. Concurrently a besotted Roy and his friend Holt try to rape Donna and another Ballgirl. All this ends in Roy getting crushed by a bus, Midnight getting stabbed in the gut and the Ballgirls being stranded in the middle of the forest trying to outrun or outgun every drunken penis in the greater Shaver Lakes area.

Tanya Rosenberg (or whatever your REAL name is) has misplayed so many of the elements of this film that it cannot rise to even a guilty pleasure level. During the 90 minute runtime Rosenberg’s camera does a modicum of leering. But rather than make it fun and ridiculous like Olen Ray’s “Dinosaur Island” or Tom DeSimone’s “Reform School Girls”, this sleaze movie seems to labor under the misguided idea that it has motivate its nudity. What you end up with is shower scenes that are too short, dialog scenes that are too long and a late-game rape scene that is all kinds of pointless and offensive.

The rape scene is most indicative of “Blood Games” central problem. It never commits to being either a rollicking sleaze-film or a gritty one; it also doesn’t manage the tonal shifts between darkness and bawdiness at all. Thus the film fails at everything it tries to do and it may well be the reason that ‘Tanya Rosenberg’ never appears again in the IMDB credit list. A thinly veiled stroke-movie should posses an omnipresent feeling of fun that pauses only to accommodate hilarious pratfalls of technical ineptitude that also heighten the amusement. It is not impossible to mix that world with a more morally dubious type of sleaziverse, one that mixes violence in with the playful sex. However in order to pull this off the film must have a director who understands atmosphere and knows how to shift into the dire realms without losing the audience. That is a tall order. One that Tanya Rosenberg was just not up to with “Blood Games”.

To Your Last Death